The 5th Hacker Halted USA is now taking place in Miami under the slogan – Unravel the Enigma of Insecurity after hurricane Sandy passed Florida last weekend.

Day 1 is the keynote day, so luckily no splitted presentation-streams. After a nice conference opening by Eric Lopez (Conference Director), Jay Bavisi gave a good introduction about the challenges of the post-PC era. He described the evolution of the hardware landscape from classic PCs to small, mobile and smart devices and how the requirements for it-security change. Further this brings problems to forensics, more privacy risks and new social engineering attacks as well as other threats.

The second presentation was given by Jack Daniel talking about responsibilities of hackers like helping and teaching other people. Later Winn Schwartau gave a very nice presentation about problems talented people face while hiring. In general he pointed out that discrimination is one big issue to solve in order to get more talented people hired and to stop the current “cyber security hiring crisis”.

A maybe interesting talk about open source intelligence was cancelled, as the presenter didn’t show up. 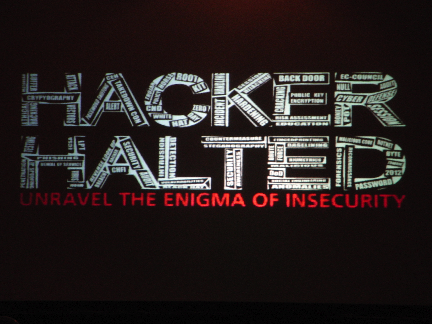 The day was closed with a panel discussion on end user security awareness. Following some key points of the discussion:

Besides the talks some other cool things are going on here: