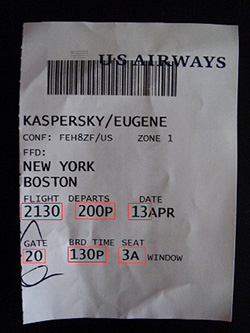 Yesterday some of us got on a flight to Boston from NYC. As the computer produced my boarding pass, I watched the numbers unfold and saw that this was a special day: number 13 was the name of the game.

Four 13s on one boarding pass!! Wow – I’m amazed I survived! How did I do it, you might ask if you happen to believe in the bad luck 13 brings?

So, I survived and I’m completing this US tour with a day in Boston. Flight number 15 of the year will be tomorrow and I’ll be looking at new numbers.

It’s all in the number