Kaspersky Lab experts refer to spam as anonymous unsolicited mass mailings. Most of these mailings are adverts, although several categories of spam serve other purposes. “Non-advertising” spam includes one of the most dangerous types of spam – fraudulent messages.

State-of-the-art spam technologies allow spammers to send emails containing fake messages, insert fake sender addresses and use infected machines to send out spam. Unsurprisingly, the use of spam to trick users, as well as the ability to conceal such activity, attracts cybercriminals and fraudsters of all types.

The anonymity of spam, i.e., the inability to easily detect those initiating mass mailings, means that cybercriminals can act with impunity, further contributing to the criminalization of spam. The services offered by spammers are actively used by sellers of counterfeit and fake products, those offering illegal services and virus writers.

This article describes fraudulent spam messages that are sent with the aim of stealing a user’s money or gaining access to personal information which can be used for the same purpose.

Phishing is the term used for the most hostile type of fraudulent spam.

Phishing messages imitate the correspondence of legitimate organizations (banks, financial companies, or payment systems). Unlike legitimate messages, however, phishing messages usually encourage recipients to “confirm” their personal data on some pretext or other. These messages contain a link to a fake page where users are asked to enter their personal data, which will then fall into the hands of criminals. The fake page is usually an exact copy of the official site of the organization that supposedly sent the message (the sender’s address is also false) so that users do not suspect anything.

In some cases after the user enters his data the browser redirects to the genuine site, making it even more unlikely that the victim will suspect anything is wrong.

Another variant of phishing entails an imitation web page using vulnerabilities in the software installed on a user’s computer to download a Trojan program, which then collects various data (e.g., passwords for bank accounts) and passes it on to its “owner”. In addition, a machine that is infected in this way may become part of a zombie network and used for cyber attacks or sending spam.

To deceive those users who not only pay attention to the design of the page but to the addresses of the sites they visit, spammers mask the URLs making them look as close to the original as possible. Phishing started with the registration of domain names similar to the domain names of the targeted sites on free web hosting services, but over time more sophisticated methods have emerged.

The message below addressed to PayPal clients is an example of the most common tactic of masking. 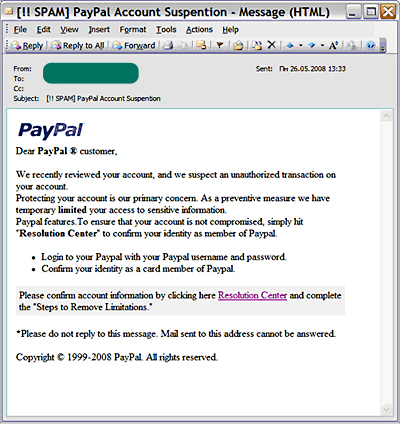 Only a very attentive user who places the cursor over the link contained in the message will notice that it in fact leads to a phishing site. The link looks very similar to the address of the legitimate site but the domain is different – client-confirmation.com. 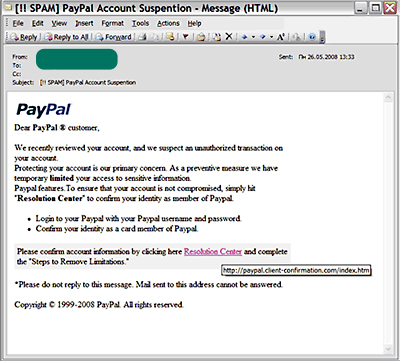 In this particular instance the “wrong” address can be viewed by positioning the cursor over the link contained in the message. More advanced users will be able to recognize the illegitimate link before clicking on it.

As well as contrived tricks of this sort, there are more primitive methods of deceiving users. For instance, when a user receives a message sent on behalf of the site administration or technical support service asking him on some pretext or other to immediately send the password to his account to the address indicated in the message. The user is warned that if he fails to do so, his account will be terminated.

Phishers on the Russian-language Internet use this trick to access users’ email accounts. Control over a user’s email enables cybercriminals to gain access to the victim’s personal data on other Internet services by requesting new passwords for those services. 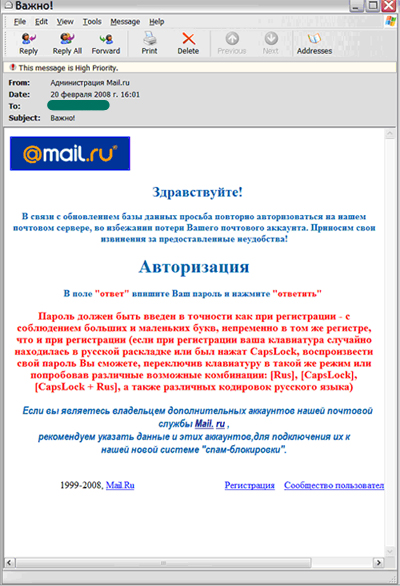 Due to updates carried out to our databases we request that you repeat the authorization process for our mail server to avoid losing your mail account. We apologize for any inconvenience!

The password must be entered exactly as it was at registration, using capital or small letters in the same register that was used during registration (if your keyboard was switched to Russian or CapsLock was turned on, use the same regime or select from the following combinations [Rus], [CapsLock], [CapsLock + Rus] as well as various Russian language codes)

If you have additional Mail. Ru accounts, we recommend that you include data for those accounts to include them in our new "spam blocker" system.

Another widespread method of collecting email passwords is to send out messages with offers to take advantage of a “vulnerability in the password backup system” which can be used to find out another user’s password. To access another user’s account the recipient of the spam message has to send the victim’s login and his own password to a specified address and in a certain format. It goes without saying that the would-be “hunter” becomes the victim of cybercriminals when he falls for a dubious offer of this kind.

However, over time users have learnt that respectable organizations never ask them for their passwords, so the effectiveness of these tricks has declined. Spammers have had to become more inventive when masking fake messages, and as a result it has become more difficult for recipients to distinguish them from legitimate messages.

A phishing attack that targeted Alfa Bank clients is the most typical illustration of the above. The cybercriminals used the standard scheme: they sent messages that appeared to be from the bank administration containing a link to the fake site, where the user was asked to enter his login and password to access the Internet banking system. The layout of the page looked just like Alfa Bank’s home page. The cybercriminals had another surprise in store for any users careless enough to click on the link – a malicious program that downloaded to the victim’s computer. The same method was used to attack the WebMoney and Yandex.Money systems. Citibank was also targeted by phishing attacks.

Cybercriminals have also tried on a number of occasions to gain access to email accounts by pretending to be from the Russian email system administration and asking users for their logins and passwords.

In addition to phishing, cybercriminals make use of lots of other tricks to catch out hapless users. More often than not spammers play upon the victim’s naivety, greed and love for freebies, though this is typical of all conmen. To achieve their goals cybercriminals have come up with various techniques. We will look at the most popular methods in more detail.