One of the main rules of IT security is to be very cautious when dealing with archived attachments in emails. “If you’re not sure, don’t open it!” It’s an easy rule to follow when the text in the message obviously has nothing to do with you.

When an experienced user reads about IT security problems at a bank where they don’t have an account, or about winning a lottery that they never bought a ticket for, then it’s usually immediately obvious that they are faced with yet another example of spam and there’s absolutely no reason to open the attached ZIP file. Cybercriminals will often resort to all types of social engineering to trick people into passing on their personal data and/or infecting their own computers. More often than not, they send messages that are made to look as though they come from well-known companies that either offer rewards for those that fill out or run the attached files (even stooping to threats of all kinds for those that fail to do so). But less mundane approaches are also used.

Yesterday, for instance, a colleague of mine pointed out a very unusual piece of spam. The text in the mass mailing was just a random array of letters in upper and lower cases, which was accompanied by an executable file in a ZIP archive. In this case, what is likely to strike the reader is that the contents of the message look like a normal letter with an intro and what resembles a farewell and a name at the end: 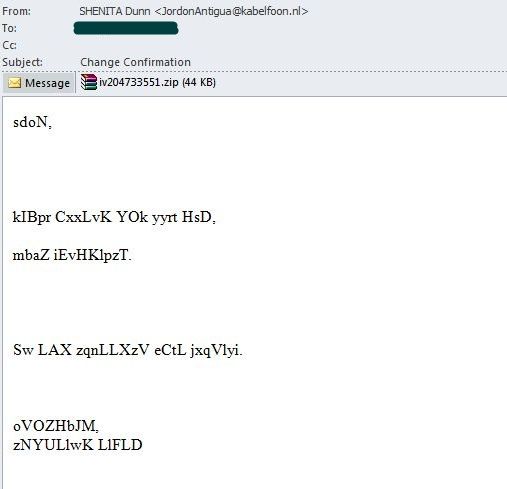 Now, I can imagine that there are some people out there who will be so intrigued by the illegible message that they will open the archive file and then, out of curiosity, run the .exe file. That’s obviously what the spammer is hoping for. If a user does launch the file, they risk ending up with a nasty piece of malware on their computer (Trojan.Win32.FraudST.atc) which, by the way, Kaspersky Anti-Virus already detected at the time the mass mailing was sent out 🙂

Desire for knowledge or the vice of curiosity?