Why Economic Incentive May Lead to the Failure of Bitcoin

Let us discuss what defines the profitability of bitcoin mining, what principles for mining speed adaptation were initially embedded into it, and why these principles can lead to the failure of the cryptocurrency in the long run.

We assume that the reader has an idea of basic Bitcoin mechanics such as blockchains, mining, mining pools, and block rewards.

Note: In this article, we investigate a theoretical possibility of how the described scenario may evolve by considering the algorithms embedded in Bitcoin. Our goal was not to make a deep analysis of the structure of miner expenditures, electricity prices in different areas of the world, bank interest rates, or payback periods for equipment.

The Bitcoin community is well aware of “51% attack”. If a miner controls more than a half of all of the mining hashrate, then he or she is capable of doing the following:

At the same time, the following happens:

The community concurs that such an attack if it were possible, would raise questions about the further existence of Bitcoin.

It is important to note that a successful attack does not necessarily entail a 51% or higher hashrate. There is some possibility that it can be carried out with a smaller hashrate share. For example, owning 30% of hashrate gives the attacker about an 18% chance of generating a chain of five blocks in a row, which would be longer than the shared one. In that case, the attacker gains all of the same privileges as in a 51% attack. In case of failure, the attacker can just try again. The majority of services that receive bitcoin payments require only five “confirmations”, which means that such a generated chain will be enough.

It’s worth noting that the Bitcoin network uses software to prohibit changing the difficulty of mining more than four times per one reassessment.

There are direct consequences stemming from these rules. If mining hashrates are added or removed during a period of 2016 blocks, then the following occurs:

The authors of Bitcoin assumed that the described algorithm would smoothly adjust network power by pushing out less power-efficient equipment and restoring the reasonable marginality of the remaining equipment. However, what this rare difficulty reassessment does is open the door to another strategy for miners: they may trick the algorithm by artificially lowering network performance. After all, when a rig is abruptly powered down, the revenue generated for the day stays at the same level; and when a rig is suddenly powered up, costs are lowered.

Mining fees and the free will of miners

In addition to receiving a reward for a block (of an emitted currency), miners also collect fees for transactions that are included in the block. As of today, the fees currently sit at approximately 10% of the block reward. We won’t dwell on this for too long, but, nevertheless, according to our estimations, it turns out that the existence of fees makes the miner strategy that we are researching here even more appealing.

Another aspect is that mining pools frequently do not directly control the mining rigs that are part of those pools. Each participant and rig owner is free to choose the pool that they will work in. The decision to move from one pool to another is usually based on economic grounds.

However, the person in charge of the pool determines the policy regarding powering up and powering down the rigs and switching the rigs to mine an alternative currency (Bitcoin Cash). In other words, we think that the described behavioral strategy should be adopted and implemented by only about 20 participants who are pool owners: the rig owners do not matter in the least here even though they possess their own “free will”.

Let’s suppose that the total hashrate of all of the miners has been stabilized and review one of the strategies for increasing marginality.

An example of miner behavior during a stable Bitcoin network hashrate

For the sake of simplicity, let’s assume that you control one half of all of the hashrates of the Bitcoin network. You can keep the rig turned on all the time and receive the reward for about 1008 blocks (50%).

You could also do the following:

It is easy to see the following:

This equation reaches its maximum at x = 1 −

. For example, smart miners should temporarily disable 80% of their rig power when M = 4%.

Why miners are not using the described strategy right now

The increase of hashrate on the Bitcoin network. The hashrate of the network has grown by 4 times in a year (Source)

The increase in difficulty on the Bitcoin network for the entire time period. Starting January 2016, the difficulty has been increased by 8 times, just like the value of bitcoin (Source)

The described strategy makes sense only under the condition that the overall network difficulty does not increase over time. Otherwise, turning off rigs will not lead to a decrease in difficulty, which makes this economically unviable.

Up until now, mining hashrates have been increasing at a fast tempo; this is a consequence of the growth of the bitcoin exchange rate. The income of miners is estimated in bitcoins, but they pay for costs in traditional currency.

Nevertheless, it would be reasonable to suppose that if the bitcoin does not endlessly grow in price, then at some time introducing new mining hashrates would not be economically viable and electricity costs would sooner or later be practically equal to the reward.

The dangers of turning off mining hashrates

When new mining hashrates are no longer introduced, miners will may resort to the above-mentioned strategy. 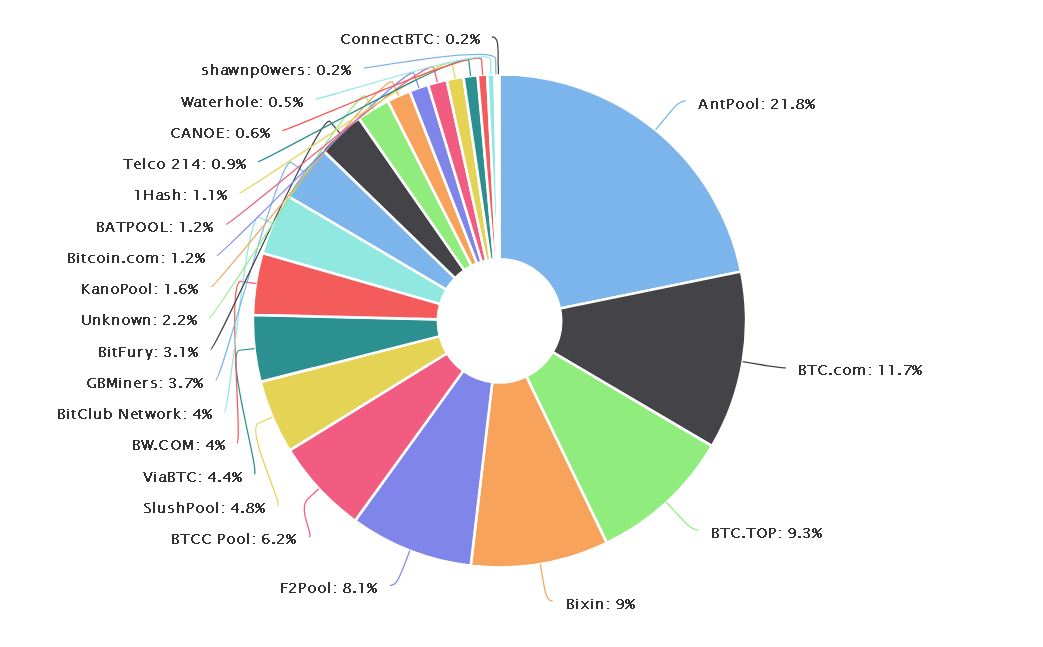 An estimate of hashrate distribution among the largest mining pools (Source)

If mining pools maximize their own profit, then 75% of hashrates are expected to be turned off at a margin of 6.25%. There is no sense in switching off more rigs, as the network will not reduce its difficulty by more than 4 times.

After that, in order to carry out a 51% attack, a fraudster must either control more than one half of the remaining hashrate (which can be easily done with the current distribution of hashrates) or suddenly turn on more rigs than were working before (which is currently unfeasible, considering the share of the largest pool).

Now, the question arises as to whether attacking the network is profitable for a person who has invested considerable amounts into increasing mining hashrates. Well, the answer is “yes, it is profitable”. In case of low mining marginality, the price of the existing mining rig is decreased too. In other words, if mining brings no revenue, then playing honestly will no longer be viable. Aside from that, the attacking party may remain anonymous and, among other things, speculate for a fall of the bitcoin price.

We are intentionally not considering a situation where the price of electricity quickly and significantly goes up or where the price of bitcoins falls quickly and by a significant amount (which is much more likely to happen). If that happens, then the miners’ strategy is quite obvious. During drastic price variations, all miners will turn off their rigs. Perchance, only those who take advantage of free electricity will stay afloat. In that case, network operation will simply stop: finishing the “two weeks” will require a lifetime, while the inability to carry out a transaction will lower the bitcoin’s price even more.

Our colleague from BitcoinMagazine analyzed the situation with the Bitcoin Cash currency just the other day. This currency appeared after Bitcoin network split on August 1, 2017. The new currency has a feature called Emergency Difficulty Adjustment (EDA). The EDA allows for adaptation of the difficulty on the Bitcoin Cash network even more often. This means that the difficulty is lowered by 20% if fewer than 6 blocks were mined in the span of 12 hours. The author comes to a conclusion similar to ours, but what’s more important is that he mentions that he has already been observing manipulations by smart miners. He fears destabilization of the Bitcoin Cash network and is counting on a prompt solution from developers.

We have analyzed one of the economically viable strategies of honest miners after the hashrate of the Bitcoin network stops growing. We have also calculated some of the key values of this strategy and inferred that using it is profitable for each individual participant but also considerably increases the risk of a 51% attack and a potential crash of the Bitcoin network as a whole.

If all of the miners were capable of coming to a solid agreement, they would go even further by turning off all but one of the rigs. This would be optimal in respect to revenue but fatal from the point of view of network security.

How should miners act in order to guarantee security? Here we can see a couple of analogies. The first one is an overproduction crisis. When this happens, manufacturers come to an agreement to publicly eliminate some of their products (at least, this was how it happened in the Middle Ages). The second one is nuclear disarmament, where countries that own large arsenals of nuclear weapons arrange for their proportional reduction.

Ideally, all miners should agree on turning off some of their rigs and, above all, on the controlled destruction of their rigs. It would be important not only to destroy rigs systematically but to control their production in a strict manner as well.

We do not have to rely on such a “peaceful” resolution. The recent split of the Bitcoin chain into two chains and the formation of Bitcoin Cash reveal that miners are not always able or have the desire to solve common problems together. It is possible that the ability to cooperate will become a decisive factor in the future.

Only time will tell how our theoretical research corresponds with actual practice.