Jose Nazario of Arbor Networks recently posted an analysis of Trojan.Heloag on their blog, mentioning that some observed behaviour might be related to Peer-to-Peer C&C functionality. However, Jose’s analysis was dynamic only and thus he was not certain about this when I contacted him (also thanks to Alex Cox for sharing network traces of his honeypot). Being interested in Peer-to-Peer botnets (e.g. Stormfucker: Owning the Storm Botnet [MP4 Video]), I had to take a deeper look.

The Heloag binaries I’ve looked at (6ede527bb5aa65eae8049ac955b1018d dropped by d9b14a7bc0334458d99e666e553f0ee0) did not contain any Peer-to-Peer C&C functionality! Instead, the bot rather speaks a very simple protocol over TCP with the following command types supported (encoded as the first byte of the packet): 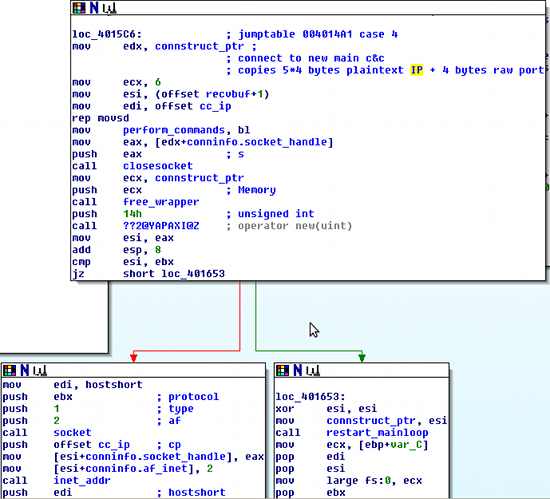 This means that even though during dynamic analysis, multiple C&C servers were observed, it is just some kind of hand-over to another C&C server which can be used for load-balancing or renting out bots. Since there is always only one server, the bot is connected to at a time, this does not add a lot to take-down resilience (phew!).

Still, this is an intersting specimen regarding malware authorship. What strikes immediately into the eye is that while for most of the commands, there is exactly one control byte, DDoS commands are all encoded in the same byte. The additional payload of this commands then controls what DDoS is carried out to where. Instead of using one type byte like for control bytes, this code uses different boolean bytes in the payload for controling DDoS types. Additionally, the DDoS related code makes heavy usage of C++ std::string’s while the rest of the main code uses wsprintf for string handling. It looks like this project was implemented by two different individuals collaborating or at least one buying some source from the other.

This malware is pretty certainly from China. First, the usage of wsprintf underlines non-western character aware path names, which you rarely see in malware with western origins. Additionally, there is one Chinese IP hardcoded in the binary, which cannot be attacked by DDoS, no matter what command is given to the bot (and this is checked after DNS resolution).

Heloag has rather no friends, just a master