CODE BLUE＠TOKYO, a cutting-edge IT security conference, was held from 18th -19th December. It was the second round, following its first occurrence in February 2014. 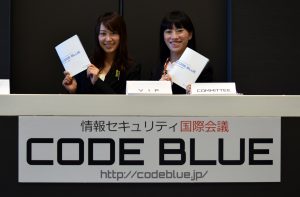 More than 400 people came together from all around the world,

including one remotely participating in the conference via a drone. Heated discussions took place among researchers and engineers during intervals, lunchtime and coffee breaks – some were too enthusiastic they almost missed the next presentation (I admit I was one of them).

The concept of the meeting is “an international conference where the world’s top class information security specialists gather to give cutting edge talks, and is a place for all participants to exchange information and interact beyond borders and languages.” As this states, all the presentations were of high-quality technical research selected from topics submitted from researchers around the world. The security topics include: embedded technologies, penetration testing, vulnerabilities, malware, programming and more. It would be perfect if I could cover all the presentations, but to save my time and yours, I would like to pick up five of them. 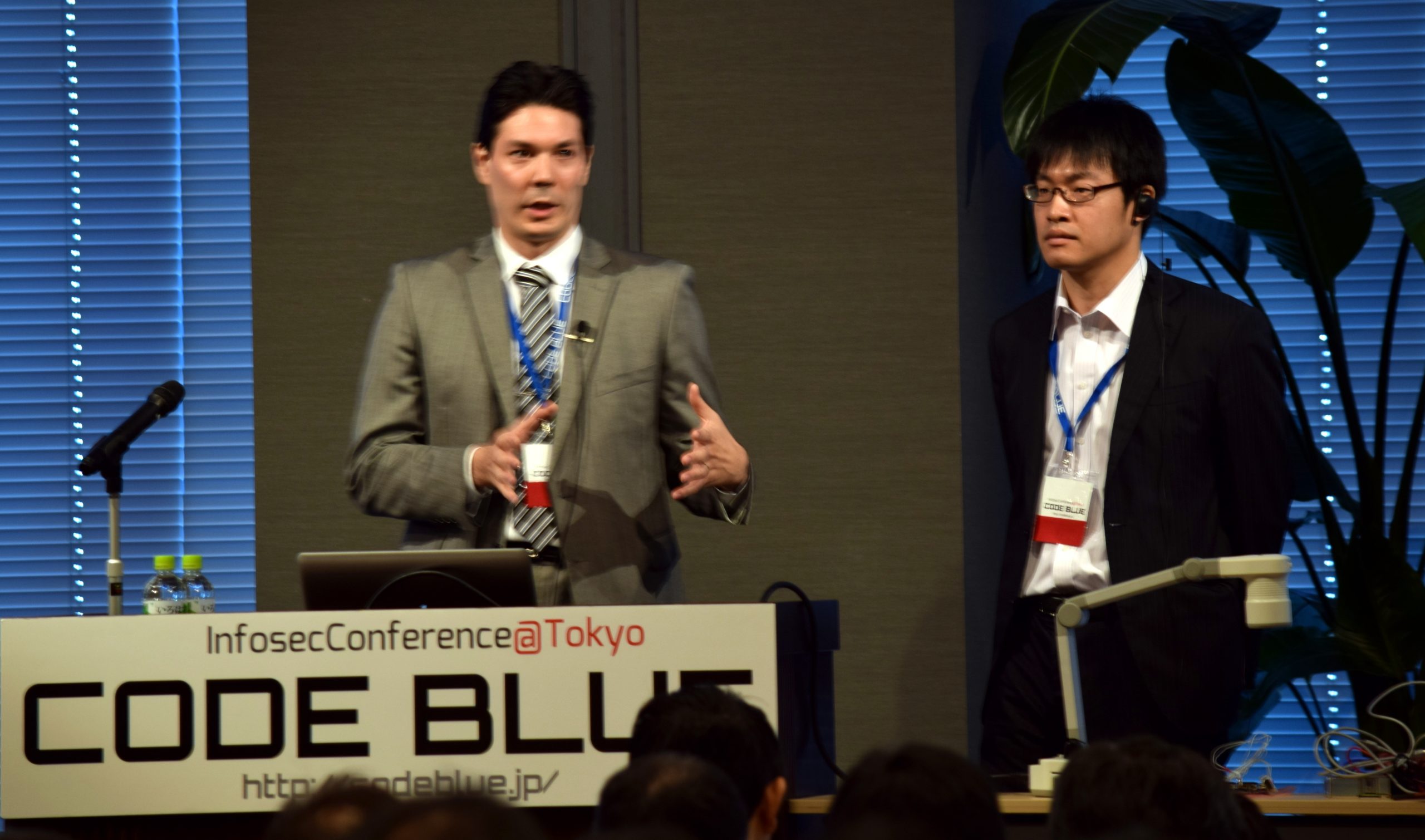 Dennis Kengo Oka (ETAS) and Takahiro Matsuki (FFRI) analyzed the behavior of ECU software running on TriCore, to attempt to verify the possibilities of attacks against it. Although they were not able to obtain the actual software itself for their testing, they created a test program on their own to show that the control system of TriCore was at risk of attack. There was a return address in a certain part of memory, and it was possible to transfer processing of the program to an arbitrary address if this was successfully overwritten. They proved the vulnerability by means of four demos, using an evaluation board. They said that they would need to obtain the ECU software actually used by TriCore in order to investigate whether or not the vulnerability could be a real threat.

Inbar Raz (Check Point) presented risks in cinema-ticketing machines, PoS machines and TVs in hospitals. Such devices have USB/LAN ports; and inserting USB keyboards or flash drives with LiveOS into those ports and booting them makes it possible to extract data stored on these devices. Since these devices often store credit card information or private keys for communications, this may pose risks. Through the presentation, Raz pointed out that special devices commonly used in public often lack protection against inappropriate access and could give away confidential data to malicious third parties.

The keynote for Day 2, by Ilfak Guilfanov, was about the history of IDA from ver. 0.1 to IDA Pro. He outlined how IDA was created; which functionalities had been implemented; what issues have been resolved; and the existence of a pirated version of IDA Pro. Besides the future landscape of IDA Pro, the identity of the icon-lady was also revealed.

IDA Pro is widely used among engineers and malware researchers in their analysis of programs; I am not an exception. 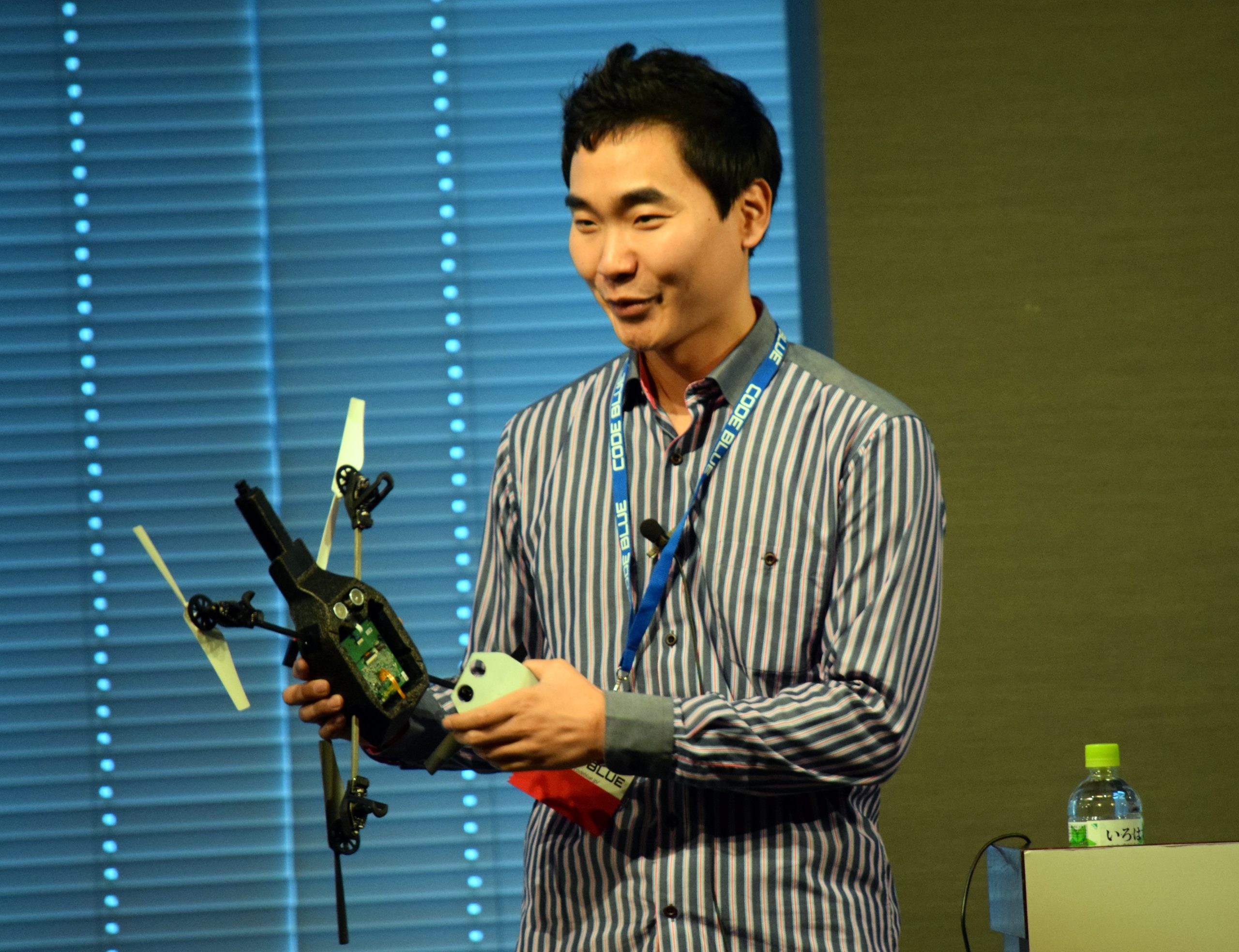 the inadequate security settings of a drone system and showed that it was easy to hijack a drone. In his video he demonstrated experiments of malware infection via a smartphone app and an attack from an infected drone to a clean drone. At the end of the presentation, he warned that drones could possibly pose threats to other systems, since it may be possible to conduct a remote attack through PC, AP, or smart devices.

Ben Schmidt (Narf Industries) and Paul Makowski (Narf Industries) focused on routers commonly used in Japan, outlined which part of their code was vulnerable and demonstrated an attack on a router. According to them, there are a lot of home routers worldwide, which allow access to HTTP and UPnP ports from a WAN – Japan was number four on their worldwide list. They further pointed out that at the time of their presentation there were ~200,000 vulnerable routers which allowed HTTP and UPnP access from a WAN in Japan. Schmidt and Makowski sent me some additional comments after their presentation. They said: “Japanese embedded devices are attractive targets because Japanese Internet links are high bandwidth and low latency.” They also emphasized the importance of quick patching of embedded devices.

David Jacoby from Kaspersky Lab GReAT was also a speaker at CODE BLUE. His presentation, entitled “How I Hacked My Home” ,was about the results of him hacking his own devices at home. His blog post is available in Securelist.

Kaspersky Lab Japan was Emerald Sponsor of CODE BLUE, as it had been for the first round.

The second round of CODE BLUE in Japan