In April 2018, Kaspersky Lab published a blogpost titled ‘Roaming Mantis uses DNS hijacking to infect Android smartphones’. Roaming Mantis uses Android malware which is designed to spread via DNS hijacking and targets Android devices. This activity is located mostly in Asia (South Korea, Bangladesh and Japan) based on our telemetry data. Potential victims were redirected by DNS hijacking to a malicious web page that distributed a Trojanized application spoofed Facebook or Chrome that is then installed manually by users. The application actually contained an Android Trojan-Banker.

Soon after our publication it was brought to our attention that other researchers were also focused on this malware family. There was also another publication after we released our own blog. We’d like to acknowledge the good work of our colleagues from other security companies McAfee and TrendMicro covering this threat independently. If you are interested in this topic, you may find the following articles useful:

In May, while monitoring Roaming Mantis, aka MoqHao and XLoader, we observed significant changes in their M.O. The group’s activity expanded geographically and they broadened their attack/evasion methods. Their landing pages and malicious apk files now support 27 languages covering Europe and the Middle East. In addition, the criminals added a phishing option for iOS devices, and crypto-mining capabilities for the PC.

In our previous blogpost we mentioned that a user attempting to connect to any websites while using a hijacked DNS, will be redirected to malicious landing pages on the rogue server. The landing page displays a popup message that corresponds to the language settings of the device and which urges the user to download a malicious apk file named ‘facebook.apk’ or ‘chrome.apk’.
Kaspersky Lab confirmed several languages hardcoded in the HTML source of the landing page to display the popup message. 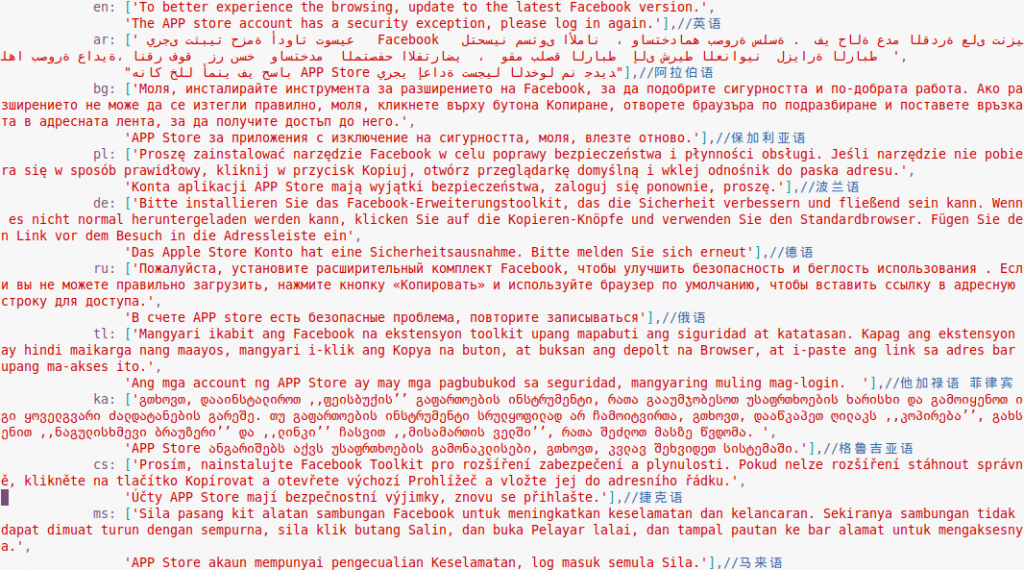 The attackers substantially extended their target languages from four to 27, including European and Middle Eastern languages. And yet, they keep adding comments in Simplified Chinese.
But, of course, this multilingualism is not limited to the landing page. The most recent malicious apk (MD5:”fbe10ce5631305ca8bf8cd17ba1a0a35″) also was expanded to supports 27 languages. 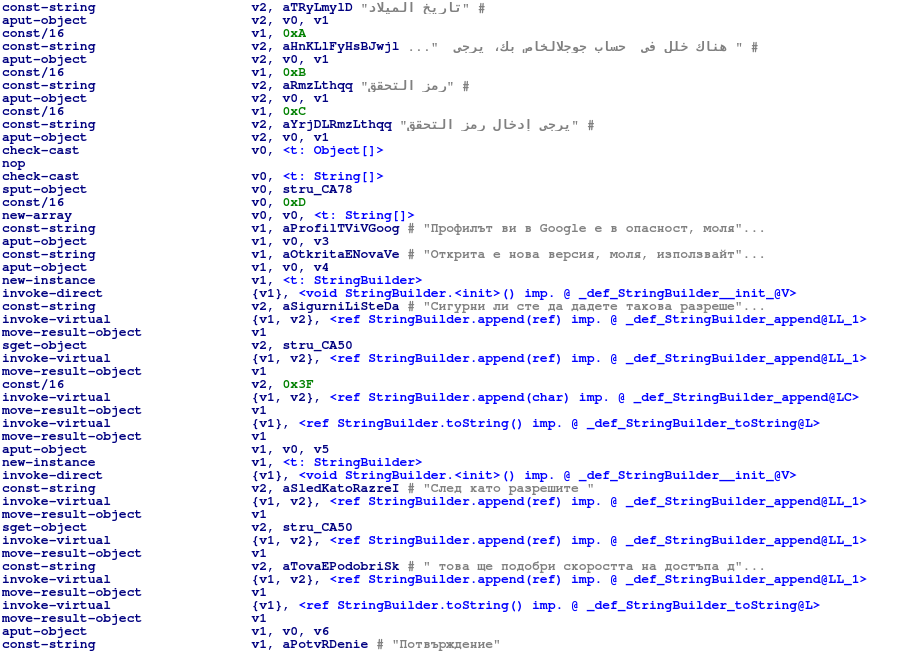 We believe the attacker made use of an easy method to potentially infect more users, by translating their initial set of languages with an automatic translator.

Previously, this criminal group focused on Android devices only. They have apparently changed their monetizing strategy since then. The attackers now target iOS devices as well, using a phishing site to steal user credentials. When a user connects to the landing page via iOS devices, the user is redirected to ‘http://security.apple.com/’:

A legitimate DNS server wouldn’t be able to resolve a domain name like that, because it simply doesn’t exist. However, a user connecting via a compromised router can access the landing page because the rogue DNS service resolves this domain to the IP address 172.247.116[.]155. The final page is a phishing page mimicking the Apple website with the very reassuring domain name ‘security.apple.com’ in the address bar of the browser. 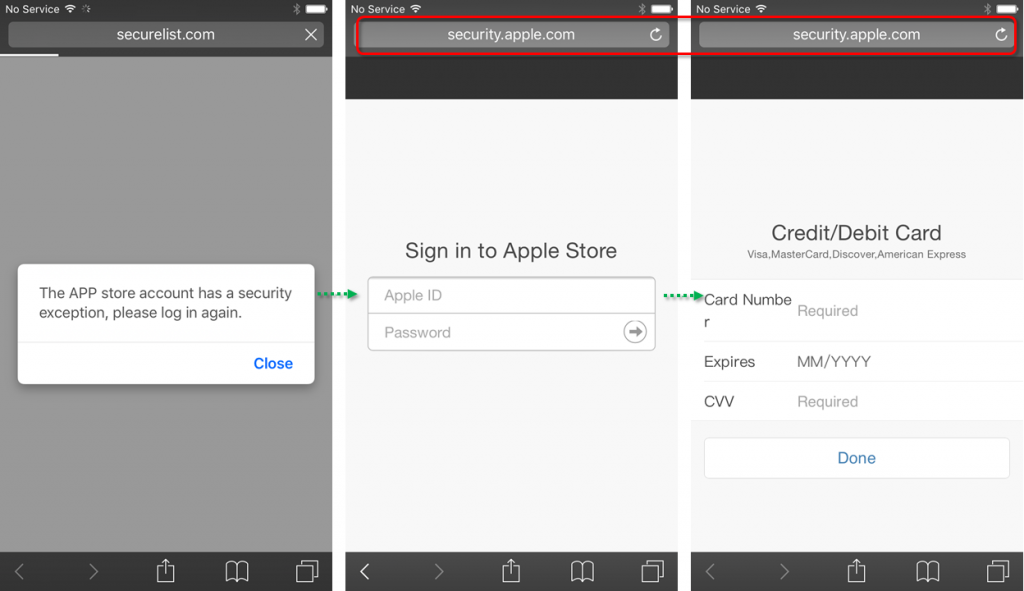 The supported languages are almost the same as on the landing pages and malicious apk files – only Bengali and Georgian are missing from the phishing site.

Looking at the HTML source code of the landing page, we also discovered a new feature: web mining via a special script executed in the browser. More details about web miners can be found in our blogpost ‘Mining is the new black‘.

Coinhive is the most popular web miner used by cybercriminals around the world. When a user connects to the landing page from a PC, the CPU usage will drastically increase because of the crypto mining activity in the browser. 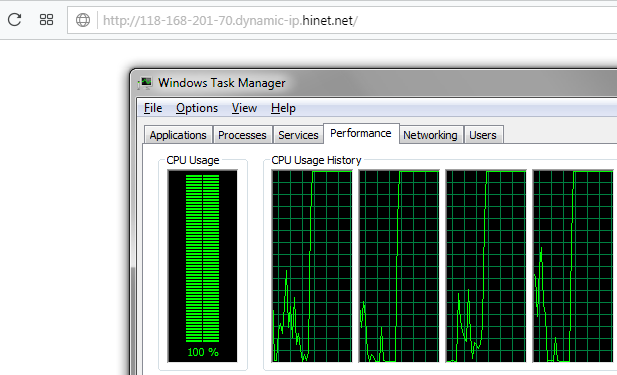 Older malicious apk samples include a legitimate website, accounts and a regular expression for retrieving the real C2 address, which the malware connects to by using a web socket. This process for obtaining its C2 changes in more recent samples, further described below:

Older samples retrieved the next C2 by accessing the legitimate website, extracting a Chinese string from a specific part of the HTML code, and decoding it. This scheme has been changed in the recent sample. Instead of using HTML protocol, it now uses email protocol to retrieve the C2.

The malware connects to an email inbox using hardcoded outlook.com credentials via POP3. It then obtains the email subject (in Chinese) and extracts the real C2 address using the string “abcd” as an anchor.
The old and new decoding functions are exactly the same.

We decoded the following next stage C2 servers:

The backdoor commands in the recent sample are as follows:

This additional command calls the OS ping command with the IP address of the C2 server. By running this, the attackers validate the availability of the server, packet travel time or detect network filtering in the target network. This feature can also be used to detect semi-isolated research environments.

Aside from the filename, we also observed that all the downloaded malicious apk files are unique due to package generation in real time as of May 16, 2018. It seems the actor added automatic generation of apk per download to avoid denylisting by file hashes. This is a new feature. According to our monitoring, the apk samples downloaded on May 8, 2018 were all the same.
However, the malicious apk still contains a loader inside ‘classes.dex’ and an encrypted payload inside ‘\assets\data.sql’ that are identical to those in the previous variants. For security researchers, we have added MD5 hashes of the decrypted payloads without hashes of the whole apk files in the IoC of this report, as well as a few full apk hashes that were uploaded to VirusTotal.

Since our first report, Roaming Mantis has evolved quickly. The update history shows how rapidly the threat has been growing: 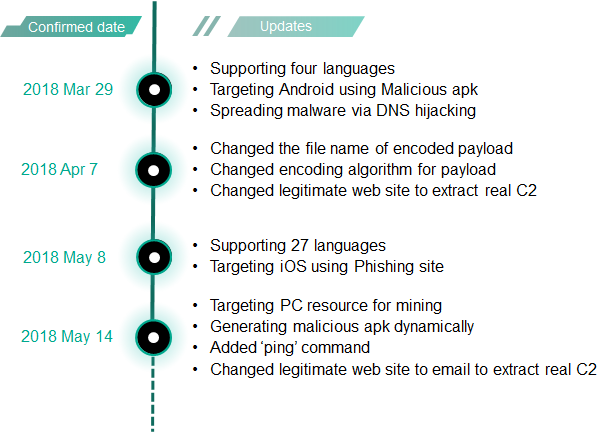 The actors behind it have been quite active in improving their tools. As seen in the graph below, which shows the unique detected user counts per day according to KSN data, the count increased on May 5. That date is very close to the update date of the new features on the landing pages. 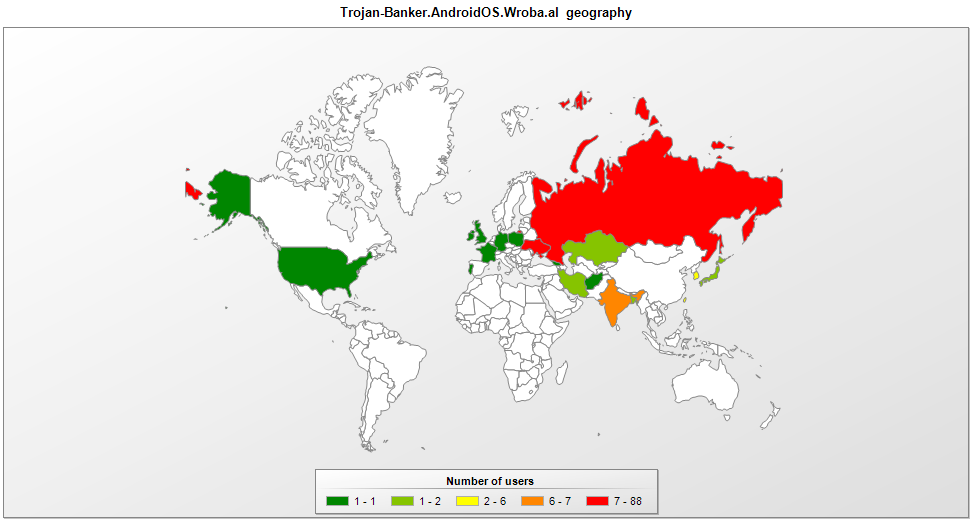 It’s clear from this that South Korea, Bangladesh and Japan are no longer the worst affected countries; instead, Russia, Ukraine and India bore the brunt. According to data gathered between February 9 and April 9, the unique user count was 150. It’s worth mentioning that the most recent data shows more than 120 users of Kaspersky Lab products were affected in just 10 days.
Also, it’s important to note that what we see in the KSN data is probably a tiny fraction of the overall picture. There are two reasons for that:

The Roaming Mantis campaign evolved significantly in a short period of time. The earliest report of this attack was made public by researchers from McAfee in August 2017. At that time, the Roaming Mantis distribution method was SMS and there was one target: South Korea. When we first reported this attack in April 2018, it had already implemented DNS hijacking and expanded its targets to the wider Asian region.
In our report of April this year, we called it an active and rapidly changing threat. New evidence shows a dramatic expansion in the target geography to include countries from Europe, the Middle East and beyond by supporting 27 languages in total. The attackers have also gone beyond Android devices by adding iOS as a new target, and recently started targeting PC platforms – the landing page PC users are redirected to is now equipped with the Coinhive web miner.
The evasion techniques used by Roaming Mantis have also become more sophisticated. Several examples of recent additions described in this post include a new method of retrieving the C2 by using the email POP protocol, server side dynamic auto-generation of changing apk file/filenames, and the inclusion of an additional command to potentially assist in identifying research environments, have all been added.
The rapid growth of the campaign implies that those behind it have a strong financial motivation and are probably well-funded.

Kaspersky products detect this malware as: