Kaspersky has continued to track the Roaming Mantis campaign. The group’s attack methods have improved and new targets continuously added in order to steal more funds. The attackers’ focus has also shifted to techniques that avoid tracking and research: allowlist for distribution, analysis environment detection and so on. We’ve also observed new malware families: Fakecop (also known as SpyAgent by McAfee) and Wroba.j (also known as Funkybot by Fortinet).

Distribution of Wroba.g via SMiShing with impersonated brands

In 2018, the group added a distribution method for Wroba.g (aliases: Moqhao and XLoader), in addition to the original method of DNS hijacking. It was SMiShing using a spoofed delivery notice from a logistics company. In 2019, we confirmed another new method where a downloaded malicious APK file has an icon that impersonates a major courier company brand. The spoofed brand icon is customized for the country it targets, for example, Sagawa Express for Japan; Yamato Transport and FedEx for Taiwan; CJ Logistics for South Korea and Econt Express for Russia. 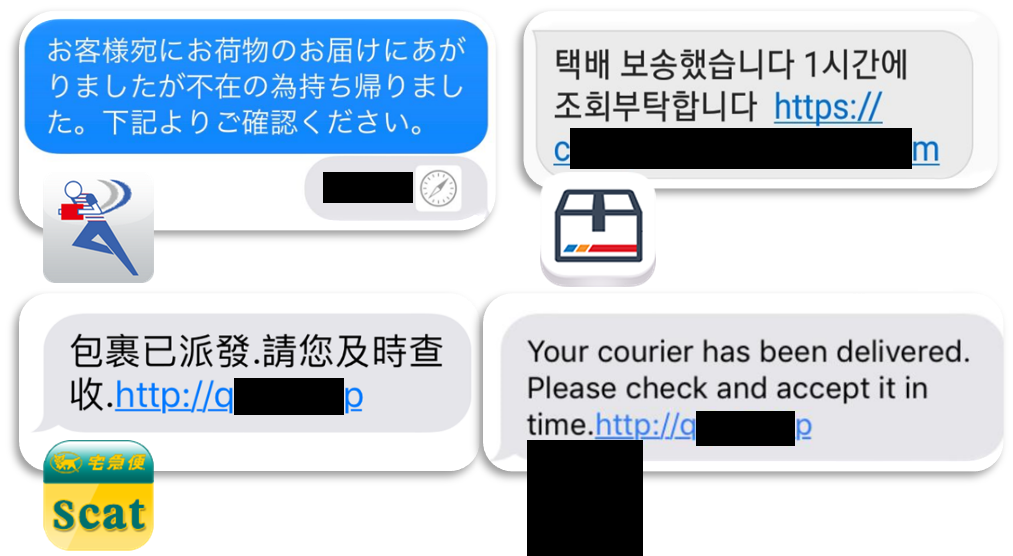 In February 2020, the attacker modified a SMiShing message from a spoofed absence notification to “delivering free masks for the coronavirus issue” in Japan, according to a warning by Japan Cybercrime Control Center (JC3). This once again shows that criminals always make use of hot topics in their activities.

Allowlist feature of Wroba.g landing page for Korea only

The Roaming Mantis actor also employed a new feature in their Wroba.g landing page – currently only on the Korean page. It’s a allowlist feature to evade security researchers. When a user visits the landing page, they have to enter their phone number for confirmation. If the phone number is on the allowlist, the landing page distributes a malicious app.apk: 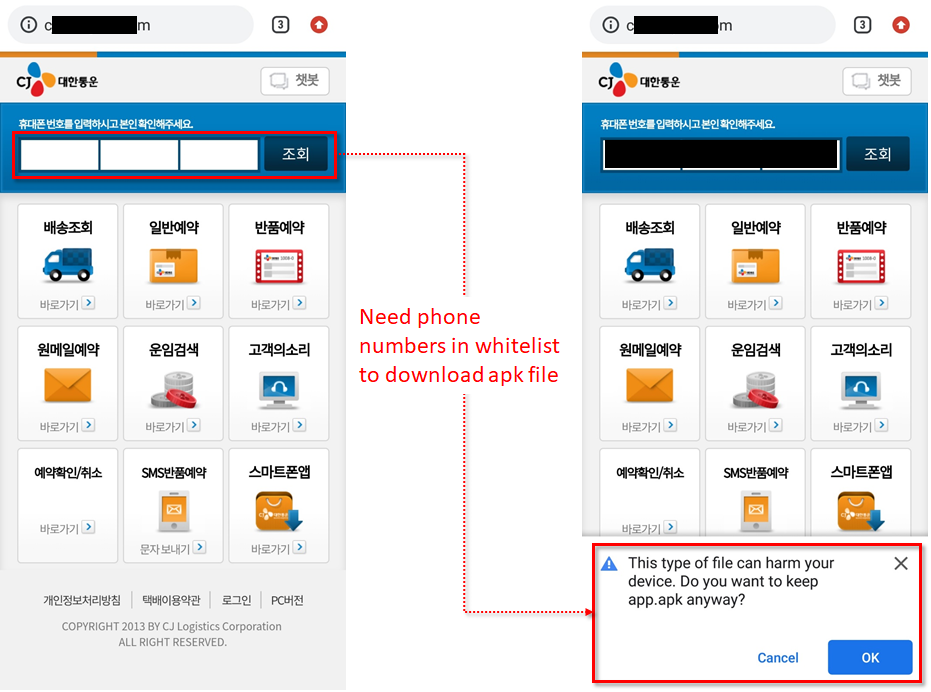 The actor has a habit of trying out their new methods in Korean first. It means the method described above may be applied later on landing pages in other languages as well. If that happens, it would make it almost impossible for researchers to obtain a sample, because it would require a specific phone number in the actor’s allowlist database.

A single Dalvik Executable (DEX) has a 64K reference limit. As a workaround, a configuration of Mutidex allows the application to build and read multiple DEX files. In 2019, the actor used Multidex in an APK file to hide a malicious loader module as an obfuscation trick. Our analysis shows that it has been modified little by little: 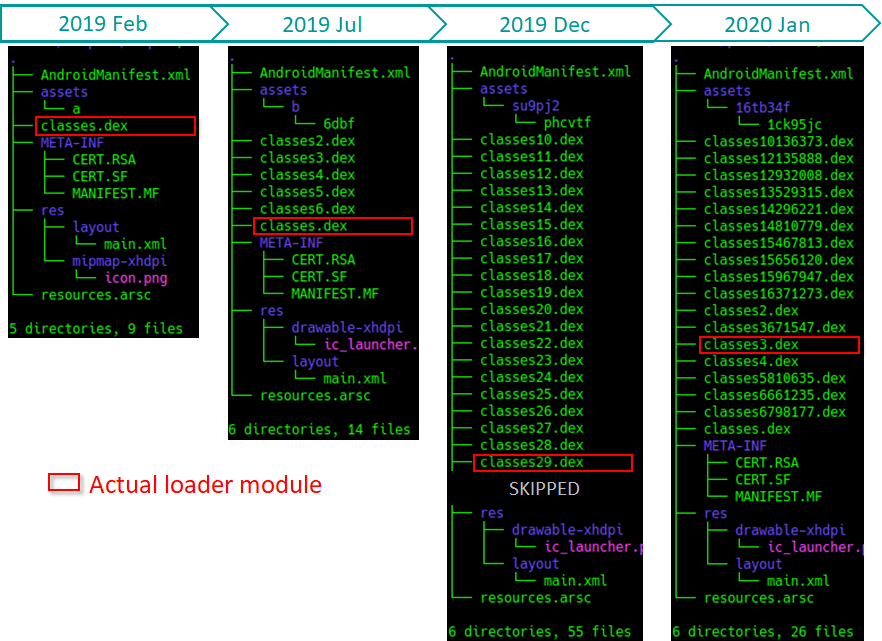 The classes${num}.dex marked with a red square is the actual malicious loader module. All the other DEX files are simply junk code. However, the encrypted payload of Wroba.g is still under the assets directory and can be decrypted by the simple python script described in our previous blogpost.

Wroba.g is targeting carrier billing and online banks in Japan

The actor has a strong financial motivation. They are targeting carrier billing and online bank accounts. They have implemented redirection to phishing sites to steal credentials in the decrypted payload of Wroba.g:

When the malware detects a specific package of a Japanese online bank or specific mobile carriers on the infected device, it connects in the background to a hardcoded malicious account of pinterest.com to fetch a phishing site with an alert message. The message claims that it has blocked unauthorized access from a third party and asks the user to click on a button to confirm they want to proceed. If the user clicks the button, they will be redirected to a phishing site: 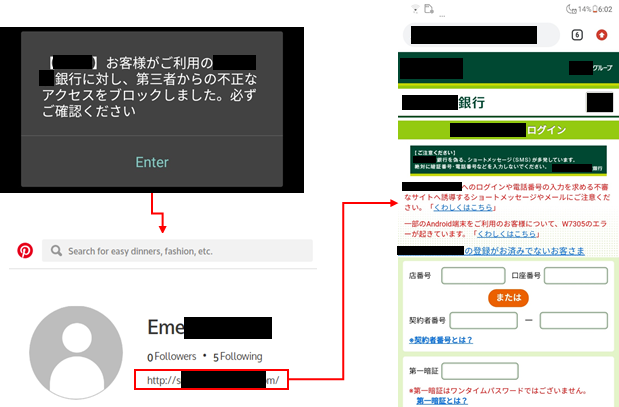 Redirecting to a phishing site via malicious account on pinterest.com

The targeted packages for online banks and mobile carriers correspond to the relevant accounts on pinterest.com that lead to phishing sites:

As can be seen in the table above, all the accounts have corresponding phishing sites as of December 2019 (data provided by @ninoseki on Twitter). These destination URLs are continuously changed by the attackers. In January 2020, only three of these accounts were enabled for some reason. However, as it’s easy for the criminals to modify the phishing page address, apps without corresponding phishing sites are also likely to be attacked again in the near future.

Roaming Mantis has been using Wroba.g and Wroba.f as its main Android malware. In April 2019, we observed two more malware families, Wroba.j and Fakecop. These two malware families have some similarities with the other families in terms of infrastructure, distribution channel, etc. We have created some slides, Roaming Mantis: A melting pot of Android bots in Botconf2019, showing the timeline, impersonated brands, malware features and money laundering method.

Based on our telemetry data, detection rates of both malicious programs were very low. We believe that this was a test by the attacker. However, the most alarming thing we discovered was the following SMS spamming function in Wroba.j: 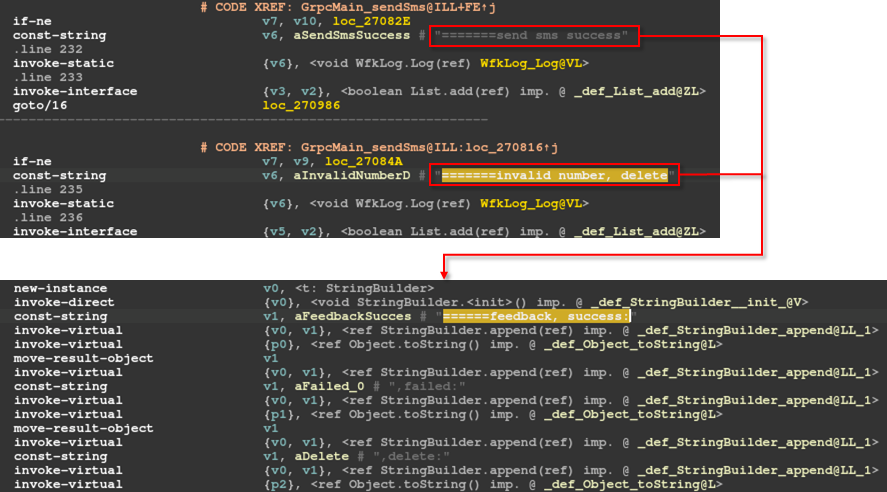 The function automatically creates a sophisticated list of phone numbers from the feedback for SMS spamming results. This malware also has another function that checks the International Mobile Subscriber Identifier (IMSI) to identify mobile carriers in Japan and add the phone number to a relevant spamming list.

According to the hardcoded IMSIs and strings shown below, the attacker seems to be targeting Docomo and Softbank mobile carriers.

The Roaming Mantis actor is strongly motivated by financial gain and is eager to evade tracking by researchers. It is now employing yet another method – allowlisting – to achieve this. This new method is currently only being applied for Korean pages, but it’s only a matter of time before it’s implemented for other languages.

The actor is still very active in using SMiShing for Android malware distribution. This is particularly alarming, because it means all infected mobile devices could form a botnet for malware delivery, SMiShing, and so on. ISPs, together with security companies, need to keep a close eye on the Roaming Mantis campaign to understand how to combat it.

Further information about the Fakecop and Wroba.j families has also appeared in the following blogs published by McAfee and Fortinet respectively:

These blogposts provide some interesting updates on Roaming Mantis activities during 2019.

Example of md5 hashes for each APK