With almost 70 talks and nearly 50 exhibitors there are a lot of opportunities to learn about new techniques and meet interesting people from all over the world. In addition there is a “LockPick Village”, a robotics-showcase and a capture the flag competition located in the expo area. 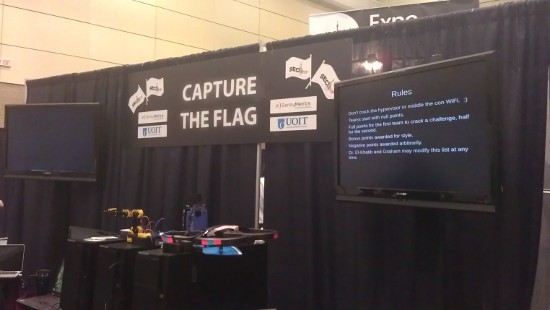 Last but not least, Kaspersky Lab is exhibiting in the expo area.

On Tuesday, representing Kaspersky Lab, Dennis Fisher gave a talk about protecting your corporate smartphones from malware and targeted attacks. Among other sessions, I attended very good talks about anti-forensic techniques and their mitigations by Michael Perklin, advanced intrusion methods and workarounds if Metasploit fails by Ryan Linn, and a talk about reversing patches for exploit creation, pen-testing or fun by Bharat Jogi.

At his talk, Jogi described how quick malware authors react on patch-releases. CVE-2012-0003 was patched on 10th of January 2012 – on 26th of January 2012 the first malware was seen in the wild exploiting that bug which leads to a remote code execution vulnerability via MIDI-files.

Over all it has been a nice conference so far, however, additional seats should be provided as some of the talks were a little bit too crowded.