The numbers both Top Twenty ratings are based on have decreased. This is due to a staggered launch of the new KAV/KIS products in different countries and many users migrating to Kaspersky Lab’s 2010 products. Data from the 2010 product line has not been used in compiling September’s ratings, but will be used in the future.

Kido (Conficker) remains active. Kido.ih, the leader of this Top Twenty for the last six months, has been joined by another variant, Kido.ir, which is a newcomer to the rankings. This detection covers all the autorun.inf files which the worm creates in order to spread via removable media.

The Palevo worm is spreading relatively quickly, with two new variants – Palevo.jdb and Palevo.jcn – making it into September’s rating. Meanwhile, Palevo.jaj, a new entry last month, has moved up 6 places, the biggest jump in the rating in September. The increase in the number of these two pieces of malware is mainly due to the fact that they can spread via removable devices, indicating that this propagation method remains extremely effective.

FlyStudio.cu, a worm of Chinese origin confirms this, as it also spreads via removable devices. This malware also has the backdoor function so common in today’s malware.

New entries in this month’s rating include a new variant of the Wimad multimedia downloader Wimad – Trojan-Downloader.WMA.Wimad.y – which has previously made an appearance in the ratings. This variant doesn’t differ fundamentally from previous variants: when it’s launched, it tries to download and execute a malicious file, in this case not-a-virus:AdWare.Win32.PlayMP3z.a.

Another new entry, Exploit.JS.Pdfka.ti, is examined in more detail below, as it also entered the second Top Twenty.

The most striking feature of the first Top Twenty is the amount of self-propagating malware, which continues to make its presence felt.

Once again, there has been a lot of movement in the second Top Twenty since last month.

Cyber criminals have been making a concerted effort to exploit all vulnerabilities in Adobe products – a number of which have been detected in recent years – regardless of product version. This increases the possibility of malware being downloaded to unpatched computers. Because of this threat, commonly used software from major vendors (in this case, Adobe) should be updated as soon as security patches are released.

Exploit.JS.DirektShow and Exploit.JS.Sheat are two malware families which figured in previous ratings; they remain active, with DirektShow.a making a comeback and Sheat.f making its first appearance.

The other new entries in the second Top Twenty are either run-of-the-mill iframe-clickers or part of a malicious script (July’s Malware Statistics contains details on how malicious scripts are often split into several parts.)

Overall, the trends of the last few months were maintained in September. Web malware bundles designed to exploit the myriad vulnerabilities found in major products are still increasing in number, giving cyber criminals plenty of opportunities for malicious activity. Simple iframe-clickers placed on legitimate, but infected sites, help spread these bundles. And cyber criminals are able to access these legitimate sites and place malware on them because they have previously used other malware designed to steal confidential data such as passwords. These steps all make up a cyclical process of compromise and infection which can be endlessly repeated. 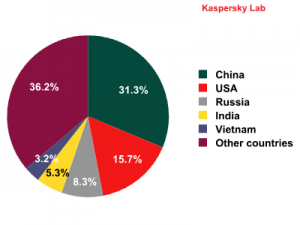