Kaspersky Lab presents its monthly malware statistics for October. From this month onwards, the data used is gathered from all products which use the Kaspersky Security Network (KSN), i.e. products from both the 2009 and 2010 lines. As a result, the Top Twenties have changed somewhat, and the figures in both ratings this month are significantly higher, due to an increased numbers of users participating in KSN.

Net-Worm.Win32.Kido.ir, which made its first appearance last month, has replaced the traditional leader, Kido.ih. This demonstrates once again that infected removable media are a major source of infection.

Still on the subject of removable media, Autorun.dui, which appears regularly in the ratings, has been joined by a very similar program, Autorun.awkp, which entered in 9th place. These malicious programs, as the name suggests, automatically run malware on removable devices.

Packed.Win32.Black.a, Packed.Win32.Klone.bj and Trojan.Win32.Swizzor.b returned to the first Top Twenty this month. Moreover, Black.a has been joined by a new version – Black.d. To recap, the Packed.Win32.Black family includes programs that have been packed with unlicensed versions of legitimate utilities used to protect executable files. In this particular case the packer is ASProtect, a utility often used by cybercriminals.

Another new addition is the multimedia Trojan downloader program GetCodec.s. This Trojan is related to GetCodec.r which we wrote about in December of last year (https://securelist.com/monthly-malware-statistics-december-2008/36237/), and spreads with the help of P2P-Worm.Win32.Nugg, just as the previous variant did.

There has been a renewed surge of activity from the once notorious Magania family. In July, Trojan-GameThief.Win32.Magania.biht was among the top 20 most common malicious programs on the Internet. In October, a new version – Magania.cbrt – as well as Trojan-Dropper.Win32.Agent.ayqa, which is linked to Magania, were among the 20 malicious programs most often detected on users’ computers.

To summarize the first rating: malicious programs that spread via removable devices were again prevalent this month, and there was noticeable gaming Trojan activity (although this is has not yet reached significant levels).

As usual the second rating has undergone some major changes since last month.

The top two positions have been claimed by new variants of Gumblar, a script Trojan-Downloader program. This program caused quite a stir at the end of May and went straight to the top of the ranking in June.

The attack using Gumblar was carefully planned; however, a little careful work resulted in all the pieces of the puzzle falling into place and detection for all the malware involved being added to antivirus databases.

Also making it into our second Top Twenty were Trojan-Dropper.Win32.Agent.ayqa (mentioned above) and yet another program designed to steal passwords to online games, Trojan-GameThief.Win32.Magania.bwsr.

In conclusion, this month has been characterized by the mass infection of legitimate websites with the Trojan-Downloader program Gumblar. The splitting of malicious scripts is also a marked trend.

Finally, below is a list of countries where the most attempts to infect via the web originated: 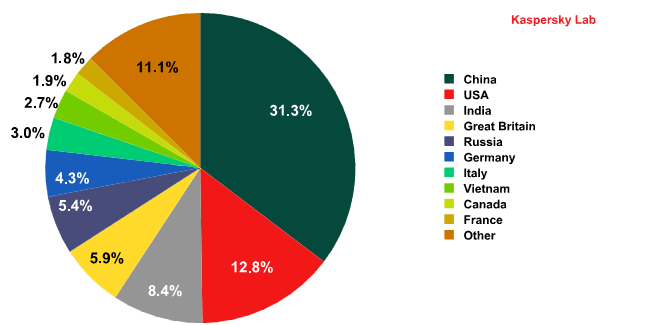