The year in figures

In 2016, fraudulent spam exploited the theme of major sporting events: the European Football Championship, the Olympic Games in Brazil, as well as the upcoming World Cups in 2018 and 2022. Typically, spammers send out fake notifications of lottery wins linked to one of these events. The content of the fake messages wasn’t exactly very original: the lottery was supposedly held by an official organization and the recipient’s address was randomly selected from millions of other addresses. To get their prize, the recipient had to reply to the email and provide some personal information.

With these sport-themed emails more details were often included in DOC, PDF or JPEG attachments that also contained graphic elements such as official emblems, event and sponsor logos. Messages that displayed the spam text directly in the body of the email were not very numerous. To add a bit of variety to their messages, spammers resorted to an old trick: they changed the text, the email addresses used for feedback, sender addresses, the attachment names, the size, etc. At the same, emails with the same attachment could be found in our traps on numerous occasions over a period of several months. 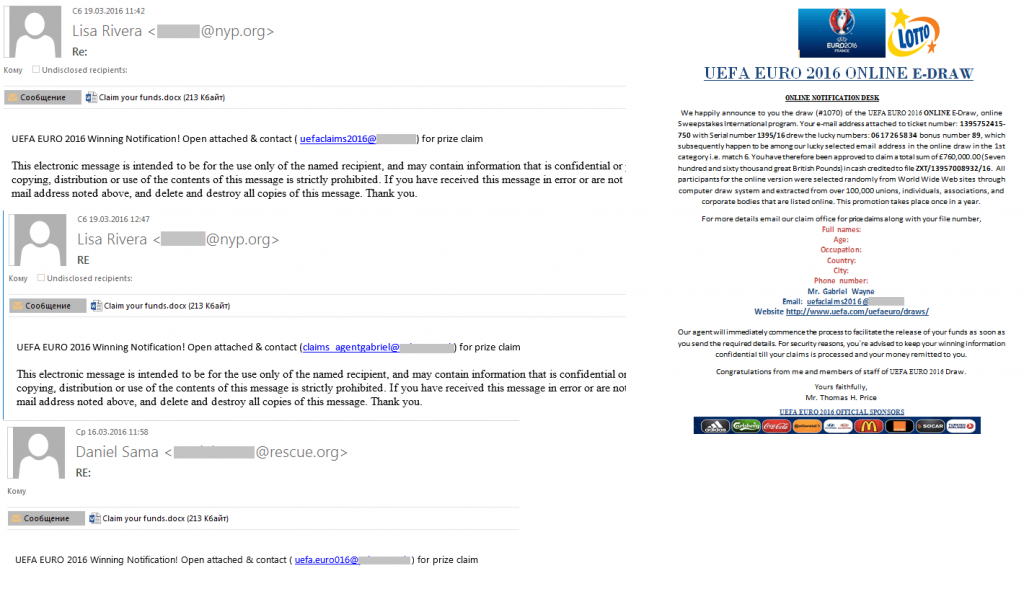 In the fourth quarter of 2016, spammers turned their attention to the future World Cup tournaments scheduled for 2018 and 2022. Spam traffic often included fraudulent notifications of lottery wins exploiting this theme. 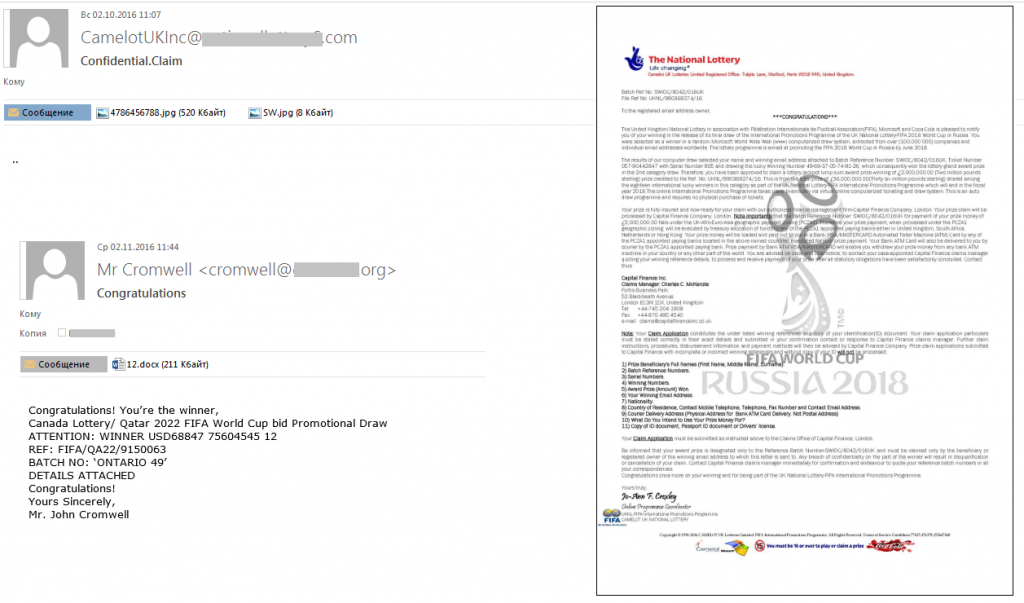 The football theme was also used in malicious spam. In particular, cybercriminals sent out fake notifications with scans taken from a website that publishes news about computer games and the world of football, apparently in an attempt to arouse interest among recipients. The attached ZIP archive included a JavaScript downloader detected by Kaspersky Lab as Trojan-Downloader.Script.Generic. This malware, in turn, downloaded other malicious software to the victim’s computer.

The subject of terrorism, which has remained an important global issue in recent years, was also exploited in spam mailings. Numerous so-called Nigerian letters were sent to users on behalf of both state organization employees and individuals. The details of the stories may have differed, but the senders’ intention was the same – to get the recipient’s attention with promises of large sums of money and make them join in a conversation. Nigerian letters exploiting the tense situation in Syria remained popular in 2016 and were actively used to trick users.

In the email traffic for 2016, we often came across messages from Chinese factories and plants advertising their products. These spammers offered both finished products as well as spare parts for a variety of different spheres.

The text of a typical spam message began with an impersonal greeting to the recipient, followed by the name and surname of the factory manager. Often, the email described the merits of the company, its achievements and types of certification. The products offered by the company were either listed in the email or sent at the request of the recipient. For greater clarity, some of the emails also contained pictures of the goods on offer. At the end of the message, there were contact details (phone, mobile phone and fax numbers, email address, various messengers). Sometimes the contact details were specified in the image attached to the email. 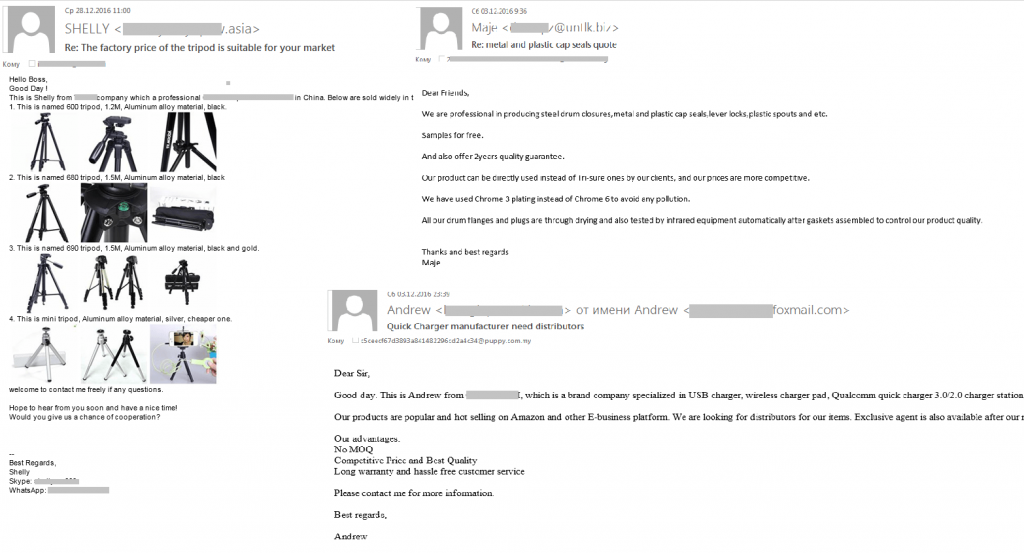 The authors of the emails were representatives of the manufacturers, but the sender addresses were registered with both free email services and the companies’ domain names. Sometimes the messages included a company website, if the company had one.

In many countries, there was a time when small and medium-sized businesses preferred to use spam to promote their products. But users began to view this kind of advertising as undesirable, anti-spam laws were introduced, and, most importantly, new, more targeted, convenient and less intrusive advertising platforms appeared, with social networking sites prominent among them. We can only presume why Chinese businesses have not followed this trend (given that China has passed its own anti-spam law, which is one of the strictest in the world). The fact is that social networks in China are mainly internal, with global giants such as Facebook not permitted. As a result, Chinese entrepreneurs have far fewer legal means of entering the international market.

A year of ransomware in spam

In 2016, we recorded a huge amount of malicious spam. In previous years, Fraud.gen was the program most often used in malicious attachments. It appears in the form of an HTML page and is designed to steal the victim’s credit card data. In 2016, the absolute leaders in spam were Trojan downloaders that download ransomware to the victim’s computer. The most popular were mass spam mailings sent out to infect user computers with the Locky encryptor. However, other ransomware such as Petya, Cryakl and Shade were also widespread.

The number of malicious programs began to increase in December 2015 and continued to grow in waves throughout the year. The sharp falls were mainly caused by the fact that cybercriminals temporarily disabled the Necurs botnet, responsible for the majority of spam spreading Locky. Once the botnet was up and running again, the cybercriminals changed the spam templates.

Quantity of malicious emails in spam, 2016

In 2016, the Anti-Phishing system was triggered 239,979,660 times on the computers of Kaspersky Lab users, which is four times more than the previous year.

Such extensive use of ransomware may be due to the availability of this sort of malware on the black market. Currently, cybercriminals can not only rent a botnet to send out spam but also connect to so-called Ransomware-as-a-Service. This means that the attacker may not be a hacker in the traditional sense, and may not even know how to code.

Both examples above contain an attachment in the form of a malicious file with a .wsf extension, detected by Kaspersky Lab as Trojan-Downloader.JS.Agent.myd. The malicious file is written in JavaScript and downloads a Locky encryptor modification to the victim’s machine. 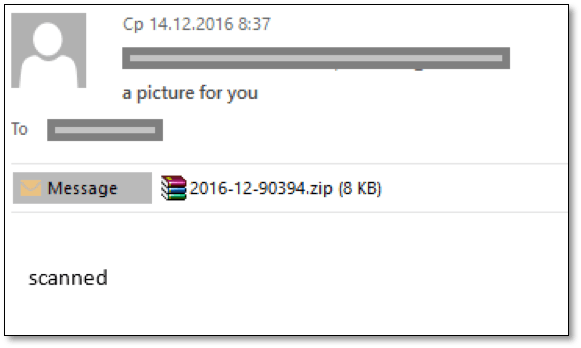 This screenshot shows an attachment containing a malicious file with a .jse extension, detected by Kaspersky Lab as Trojan-Downloader.JS.Cryptoload.auk. This is yet another malicious file written in JavaScript that downloads a Locky encryptor modification to the victim’s machine.

Overall, a wide variety of malicious attachments were used. As a rule, these were archives containing programs written in Java and JavaScript (JS files, JAR, WSF, WRN, and others), but there were also office documents with macros (DOC, DOCX, XLS, RTF) as well as classic executable files (EXE). Sometimes rare archive formats such as CAB were used.

When launched, ransomware programs encrypt the data on a user’s computer and demand a ransom (usually in bitcoins via the Tor network). More details about these programs can be found in our report Kaspersky Security Bulletin 2016. The ransomware revolution.

To make each email unique, spammers insert random sequences of characters in their messages that are invisible to the user. This trick is not new, but spammers continue to use it, perfecting their methods. Below we describe the most popular tricks of 2016 used by spammers to add ‘noise’. All the examples below are taken from real-life spam messages.

There may be numerous ways of altering text in an email, but when it comes to URLs in spam messages, the situation is different. There can be lots of URLs in a single mass mailing (even reaching into the thousands), but they are subject to more limitations, as spammers have to pay for the purchase of each domain. However, attackers have come up with different techniques to make each link unique while also ensuring it opens correctly when clicked.