The world’s largest mobile innovation forum, “Super Mobility Week”, is being held in Las Vegas. We were there to participate and moderate a panel on mobile and cloud cyber-security with speakers from Verizon, Samsung, and Eriksonn Mobile. 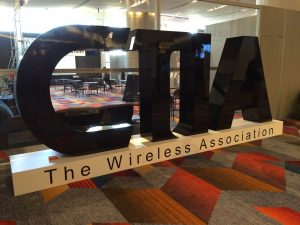 The event maintains an impressive vendor floor and multiple stages for discussions and panels throughout the days. The floor hosts vendors presenting their newest products, including wearables and other IoT. The afternoon keynotes yesterday brought a switch from the planned Twitter’s CEO to their “President of Global Revenue” Mark Bain, who spoke about both their technology push onto wearables and IoT, and a glimpse into their data mining capabilities derived from their Gnip acquisition. It’s notable that he didn’t mention anything about security or privacy. Two factor authentication is ancient history for them, while Apple and their customers unfortunately continue to learn the hard way that some inconvenience is a small tradeoff for privacy and security.

Microsoft also keynoted, bringing their EVP of Devices Group onstage to discuss their push into mobile to cloud technologies with Nokia devices and “Cloud OS”. Again, no mention of security baked into these technologies, although we haven’t seen any recent naked celebrity photo theft from the Microsoft cloud.

My panel’s discussion “Cybersecurity — An Industry View” (http://www2014.supermobilityweek.com/info/index.cfm/mobilecon-thought-leadership-session-details?calID=2508) weaved mainly in and out of enterprise wide security challenges to BYOD and cloud adoption, along with recent and relevant threats that we noted:

3. Wifi and Ssl insecurities, as implemented in and used by mobile technologies, are on the increase and will likely continue to be.

4. Targeted attackers express interest in an expanded set of technologies, including various mobile devices by the Rocra, LuckyCat and Chuli attackers.

The event lasts from September 9th to the 11th.