CODEGATE 2014 was held in COEX, Seoul Samsung from 2nd-3rd April. It is one of the major hacking festivals, composed of hacking contests (CTF) and an international conference. The purpose of this event is to discover and cultivate the human resources of IT security. It is also a venue for younger people to meet professionals in IT security, giving them the chance to play an active part in the CTF events and speaking at the conference.

Traditionally, teams made up of security professionals have taken part in the “Hacking Defense Contest”. This year, as a new initiative at CODDGATE, they launched a “junior” category open to young people. In this “Junior Hacking Defense Contest”, students can participate as individuals, to give them more chances to get into this field.The challenge categories included web hacking, reverse engineering and exploitation. There was also a cryptography category. 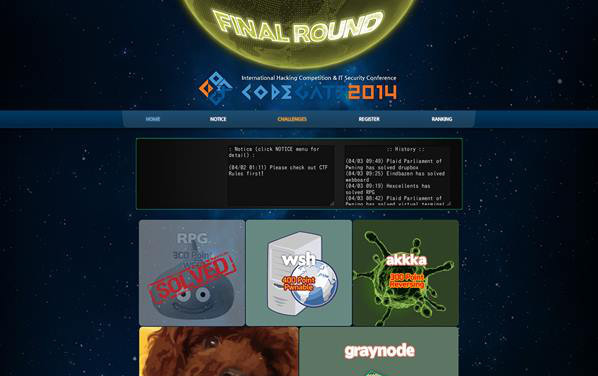 Mr. Beist – One of Organizers said “I didn’t sleep for like 60 hours during the pre-qual. Others couldn’t sleep much either. Also, setting up the challenges was far from easy. One of grayhash, chpie, had to spend like 17 days to create one hard challenge.”

About 1,300 teams participated in the “Hacking Defense Contest”. The final was played by 15 teams: the top 12 teams from the qualification and 2 champions of other CTFs. The team “Played Parliament of Pwning” (PPP) won a stunning victory in the final match of the strong suit. They achieved the overwhelming score of 6,080 points to win a cash award of 30 million KRW (around 30,000 USD), as well as a ticket to the DEFCON in Las Vegas in the summer. Second place was taken by “More Smoked Leet Chicken” and in Third place was “Dragon Sector”. 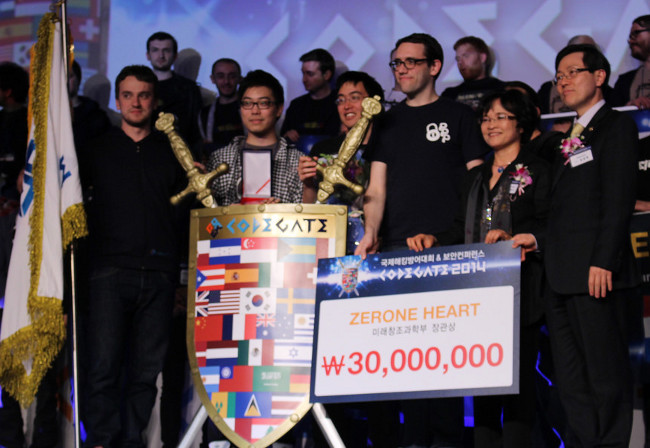 In the “Junior Hacking Defense Contest”, approximately 500 students from different countries competed amongst each other. “setuid0” became the first champion, followed by “dmbs335”, and in third place was “n0n3m4”.

CTF is one of the great entry points into IT security – by actively competing against each other, participants get deeper insights to IT security. Let’s play CTF:)