CozyDuke (aka CozyBear, CozyCar or “Office Monkeys”) is a precise attacker. Kaspersky Lab has observed signs of attacks against government organizations and commercial entities in the US, Germany, South Korea and Uzbekistan. In 2014, targets included the White House and the US Department of State, as believed.

The actor often spearphishes targets with e-mails containing a link to a hacked website. Sometimes it is a high profile, legitimate site such as “diplomacy.pl”, hosting a ZIP archive. The ZIP archive contains a RAR SFX which installs the malware and shows an empty PDF decoy. 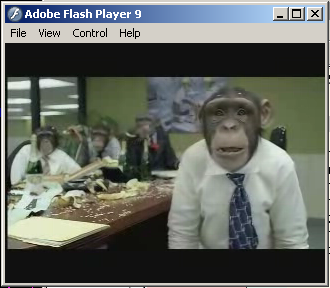 In other highly successful runs, this actor sends out phony flash videos directly as email attachments. A clever example is “Office Monkeys LOL Video.zip”. The executable within not only plays a flash video, but drops and runs another CozyDuke executable. These videos are quickly passed around offices with delight while systems are infected in the background silently. Many of this APT’s components are signed with phony Intel and AMD digital certificates. 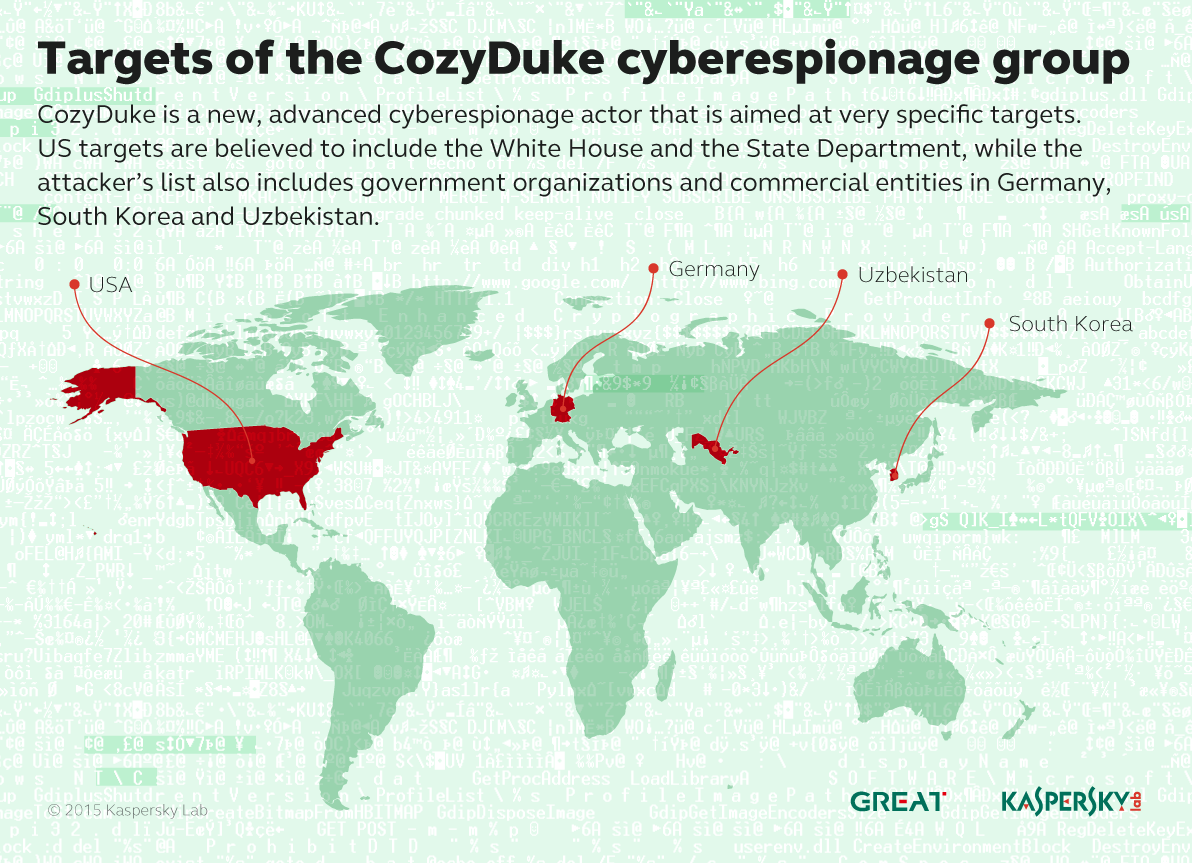 Let’s examine a smattering of representative CozyDuke files and data. There is much to their toolset.

CozyDuke droppers and spyware components often maintain fairly common characteristics, but these files’ functionality are modified in slight ways depending on the team’s needs. This rapid development and deployment is interesting.

Believe it or not, recipients in bulk run the file within:

This file in turn drops two executables to %temp%:

The file collects system information, and then invokes a WMI instance in the rootsecuritycenter namespace to identify security products installed on the system, meaning that this code was built for x86 systems, wql here:

The code hunts for several security products to evade:

In addition to the WMI/wql use, it also hunts through the “SOFTWAREMicrosoftWindowsCurrentVersionUninstall” registry key looking for security products to avoid. Following these checks, it drops several more malware files signed with the pasted AMD digital signature to a directory it creates. These files are stored within an 217kb encrypted cab file in the dropper’s resources under the name “A”. The cab file was encrypted and decrypted using a simple xor cipher with a rotating 16 byte key: x36x11xddx08xacx4bx72xf8x51x04x68x2ex3ex38x64x32.

The cab file is decompressed and its contents are created on disk. These dropped files bundle functionality for both 64bit and 32bit Windows systems and are all located within one directory:
C:Documents and SettingsuserApplication DataATI_Subsystem

This dll is built with anti-AV protections as well. However, it looks for a different but overlapping set, and the random duplication suggests that this component was cobbled together with its dropper, partly regionally based on target selection.

The code collects information about the system and xml formats this data prior to encryption for proper parsing:

Finally, this process beacons to www.sanjosemaristas.com, which appears to be a site that has been compromised and misused multiple times in the past couple of years.
hxxp://www.sanjosemaristas[.]com/app/index.php?{A01BA0AD-9BB3-4F38-B76B-A00AD11CBAAA}, providing the current network adapter’s service name GUID. It uses standard Win32 base cryptography functions to generate a CALG_RC4 session key to encrypt the collected data communications and POSTs it to the server.

Samples are usually signed with a fake certificate – we’ve seen two instances, one AMD and one Intel: 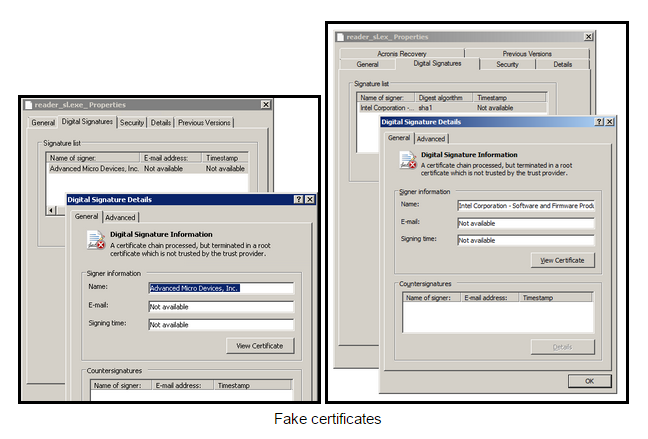 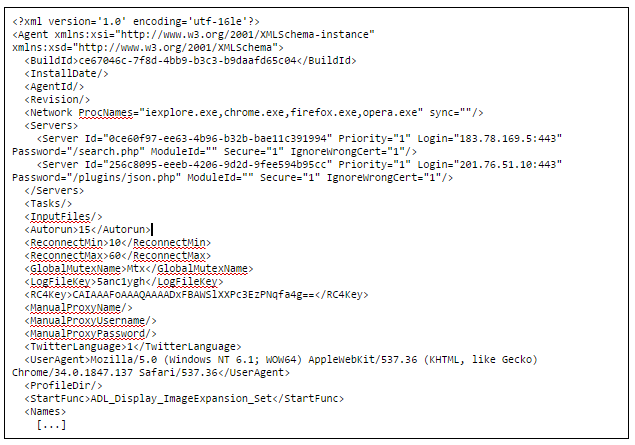 The attackers send commands and new modules to be executed to the victims through the C&Cs. The C&C scripts store these temporarily until the victim next connects to retrieve local files. We’ve identified two such files:

Here’s how such a database file appears:

These are BASE64 encoded and use the same RC4 encryption key as the malware configuration.

Decoding them resulted in the following payloads:

Decoding them also resulted in a set of tasking files maintaining agent commands and parameter values:

screenshot_task.dll is a 32-bit dll used to take a screenshot of the full desktop window and save it as a bitmap in %temp%. The number of times the screenshot is repeated is configurable within the xml task file.

cmd_task.dll is a 32-bit dll that maintains several primitives. It is used to create new processes, perform as a command line shell, and several other tasks.

Each of these payloads is delivered together with a configuration file that explains how to run it, for instance:

In another tasking, we notice a tracked victim:

They copy down a base64 encoded document from Microsoft OneDrive to the victim system and decode it there:

Not everything works as planned, so they maintain error reporting facility for the c2 communications: 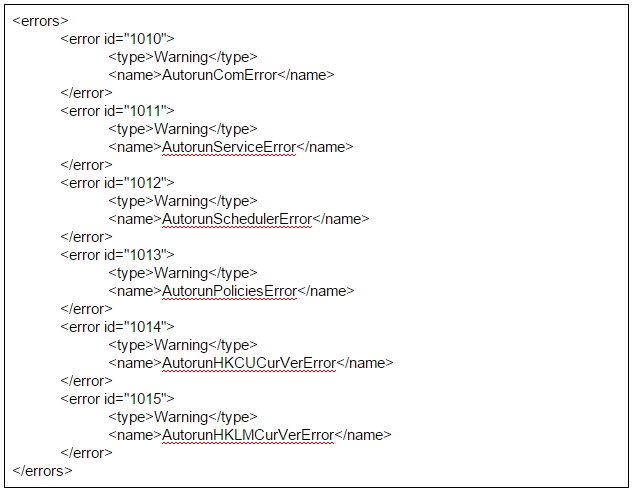 Furthermore, ChromeUpdate is a 64-bit executable (which appears to be a WEXTRACT package) that oddly drops a 32-bit Dll. Cache.dll is simply stored as a cabinet file in the ChromeUpdate’s resource section.

Cache.dll was written in C/C++ and built with a Microsoft compiler.

Structurally, “Cache.dll” is a fairly large backdoor at 425KB. It maintains both code and data in the raw, encrypted blobs of data to be decrypted and used at runtime, and hidden functionality that isn’t exposed until runtime. No pdb/debug strings are present in the code.

It maintains eight exports, including DllMain:

ADB_Setup is a entry point that simply spawns another thread and waits for completion. 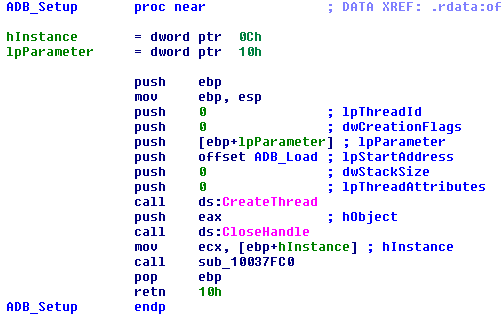 Above, we see a new thread created with the start address of Cache.dll export  “ADB_Load” by the initial thread.

This exported function is passed control while the initial thread runs a Windows message loop. It first grabs an encrypted blob stored away in a global variable and pulls out 381 bytes of this encrypted data: 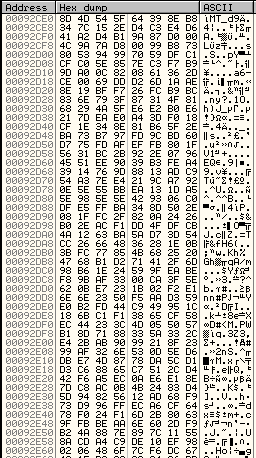 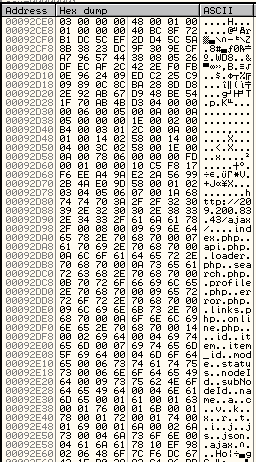 The code then decodes this set of import symbols and resolves addresses for its networking and data stealing functionality:

It then uses the runtime resolved networking API calls to send the collected data back to a hardcoded c2 and set of urls.

Communications with the CozyDuke C2 include key/value pairs passed as URL parameters. Observed keys that remind us of the Cosmicduke communications include:

One of the second stage modules of CozyDuke/Cozy Bear, Show.dll, is particularly interesting because it appears to have been built onto the same platform as OnionDuke. Below we compare Show.dll with the OnionDuke sample MD5: c8eb6040fd02d77660d19057a38ff769. Both have exactly the same export tables and appear to be called internally “UserCache.dll”: 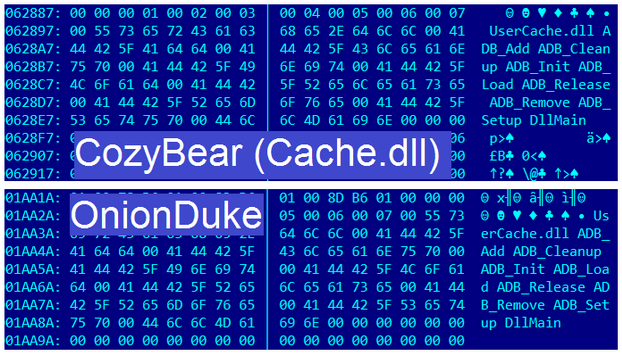 This seems to indicate the authors of OnionDuke and CozyDuke / Cozy Bear are the same, or working together.

Another interesting comparison of two other files matches a recent second stage tool from the CozyDuke attacks with a second stage component from other Miniduke/Onionduke attacks.

The two share identical export function names in their export directories, and the naming appears to be randomly assigned at compile time. The table below presents the function matches based on size data, but the calls, jmps and code all match as well. The contents of only one of these exports in update.dll has no match whatsoever in cache.dll. 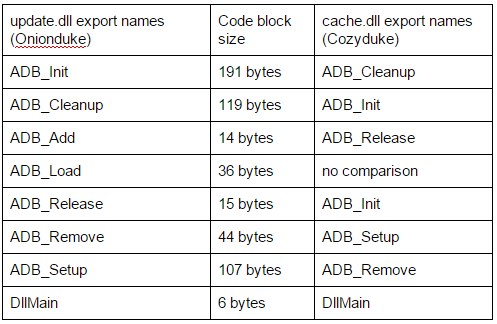 Unlike the atiumdag.dll file above, however, cache.dll and update.dll do not maintain anti-AV and anti-analysis functionality sets. Perhaps they plan to pair this stealer with another dropper that maintains the WMI anti-AV functionality. This rotating functionality seems representational for the set, along with other characteristics. Their custom backdoor components appear to slightly evolve over time, with modifications to anti-detection, cryptography, and trojan functionality changing per operation. This rapid development and deployment reminds us of the APT28/Sofacy toolset, especially the coreshell and chopstick components.

We expect ongoing and further activity from this group in the near future and variations on the malware used in previous duke-ish incidents.