Cryptocurrency has gradually evolved from an element of a new world, utopian economy to a business that has affected even those sectors of society least involved in information technology. At the same time, it has acquired a fair number of “undesirable” supporters who aim to enrich themselves at the expense of other users: attackers who release miners embedded in user JS scripts, or plan to implement miners into IoT devices at the production stage; hidden in countless variations of Trojans in conjunction with SMB exploits etc.

We will tell you two unusual success stories that happened on the “miner front”. The first story echoes the TinyNuke event and, in many respects gives an idea of the situation with miners. The second one proves that to get crypto-currency, you don’t need to “burn” the processor.

DiscordiaMiner and fights on forums

In early June, our analysts found a new and seemingly unremarkable Trojan that unloaded the miner of the popular Montero crypto-currency. However, in the course of further research, we uncovered many interesting details that we would like to share with you.

Kaspersky Lab products detect this Trojan as Trojan.Win32.DiscordiaMiner. It works as follows:

All interaction with the command server (C&C) occurs in the open, with the help of GET requests, without any check or verification. In all samples, the hxxp://api[.]boosting[.]online address is provided as the C&C. The line associated with the individual user (etc. MTn31JMWIT) and the address of the required resource – the list of files, the update, etc. – are added to the server address. Example: hxxp://api[.]boosting[.]online/MTn31JMWIT/getDiscordia

Discord on the forum

As mentioned above, at a certain point in its work, the Trojan is instructed to issue a command to run the miner: it specifies the email of the user who has “done the job”. It looks like this:

Using the value of the <user_email> argument, with the first line of the search results we get the Trojan-related topic on the Russian-language forum:

On this forum thread there is a wide discussion of the Trojan’s work details. The most interesting part of the discussion is on page 21 – the forum participants accuse the Trojan’s author of substituting users’ addresses with his own. Among other things, there is also a dialogue on the chat app, Telegram where the author explains this substitution as a banal mistake.

On the forum, the author of DiscordiaMiner references the short lifespan of this error as an argument in his defense: 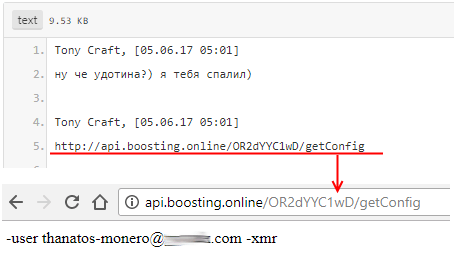 Among other things, in the course of the dispute the author mentions that the source codes of the Trojan DiscordiaMiner are now publicly available.

Indeed, the first line of the search results provides the link to the author’s repository. 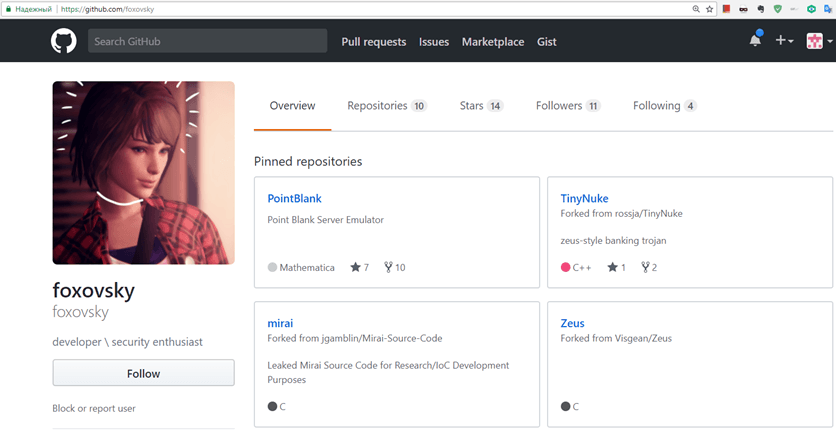 In addition to the source codes, which really do coincide fully with the restored Trojan code, the repository also includes very informative diagrams of the Trojan’s operation, the samples of documents used for distribution as well as instructions for how exactly the UAC is to be bypassed. The pictures below are taken from the repository (which is currently unavailable). 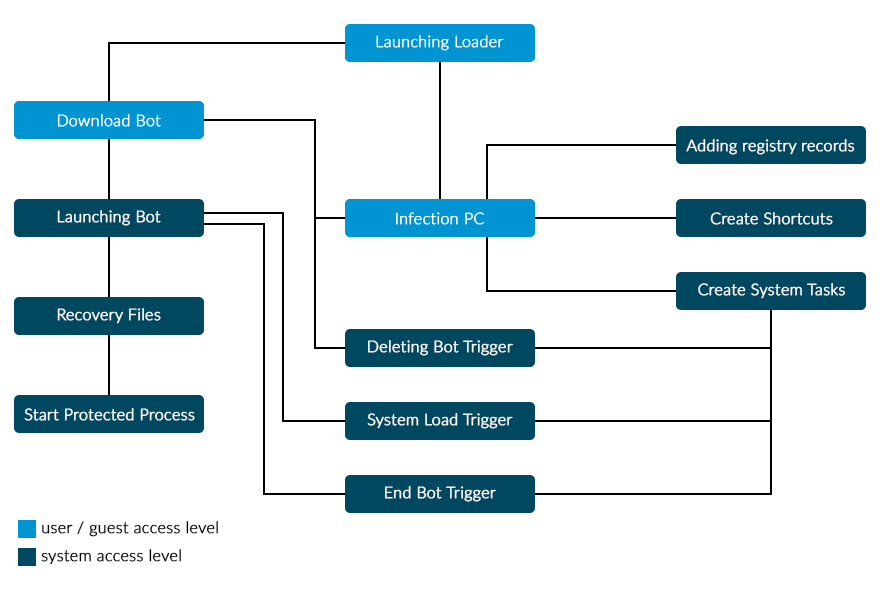 The source codes are presented in full and, apparently, only the user-associated string (ClientID) varies from assembly to assembly. 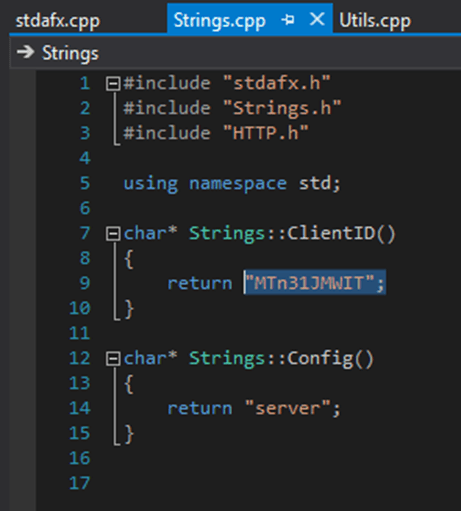 Although the “dumping” of program source code is not unique, this case in many respects echoes the NukeBot story – the same disputes on a forum followed by the publication of the source codes by the author with the aim of “protecting honor and dignity”. Another common feature is the “minimalistic” design of both Trojans: NukeBot could only embed web-based injections into the browser, while DiscordiaMiner can download and run files from a remote server. But we cannot say whether these two bots have any more specific connections.

It’s extremely rare for authors of mining software to become fabulously wealthy. With a few exceptions, the wallets used by attackers contain a total of $50-100, received from all incoming transfers during the entire period of the Trojan’s work. However, there are those that do not go down the beaten path, and benefit from “alternative” ways. The authors of the CryptoShuffler Trojan belong in this category.

Kaspersky Lab products detect this Trojan as Trojan-Banker.Win32.CryptoShuffler.gen. MD5 of the file in question is 0ad946c351af8b53eac06c9b8526f8e4

The key feature of CryptoShuffler is the following: instead of wasting processor time on mining, the Trojan simply substitutes the sender’s address in the clipboard! That was once the case with WebMoney and Bitcoin, but this malware sample is aimed at all popular cryptocurrencies.

As usually happens in the beginning, the Trojan writes itself into the registry for autoloading.

In later versions of the Trojan, this procedure is slightly different – if the module is implemented as a dynamically loaded library, its further run at the start is performed using the rundll32 system utility. The name of the called procedure and, concurrently, the main function of the represented library is call_directx_9.

The Trojan creates a thread of execution, in which it maintains unchanged the autorun branch specified in the screenshot above. 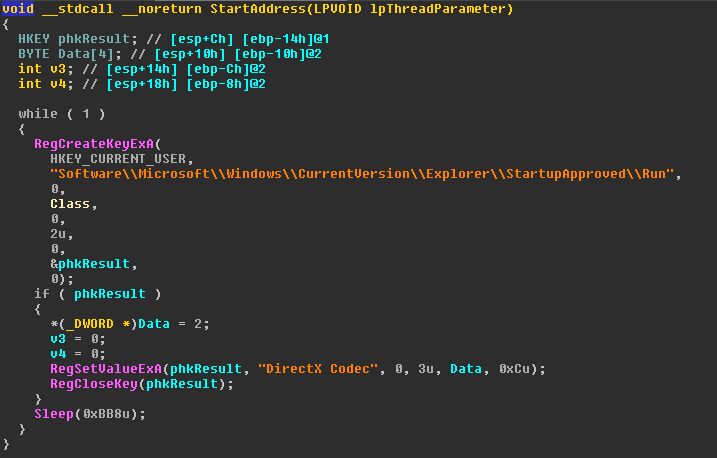 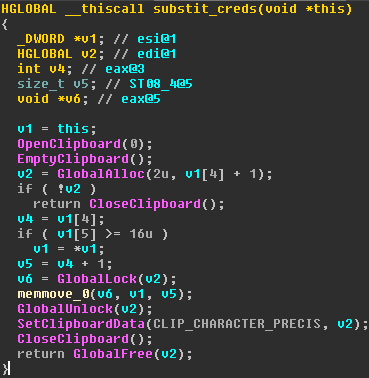 The search for the corresponding wallet in the string received from the clipboard is performed using regular expressions. Most popular cryptocurrency wallets have a fixed constant at the beginning of the string and a certain length – it is easy to create regular expressions for them. For example, the address of Bitcoin-wallets can be easily recognized by the digit “1” or “3” at the beginning of the string.

The body of the Trojan stores the wallets, corresponding to the specified cryptocurrencies. The main list looks like this. 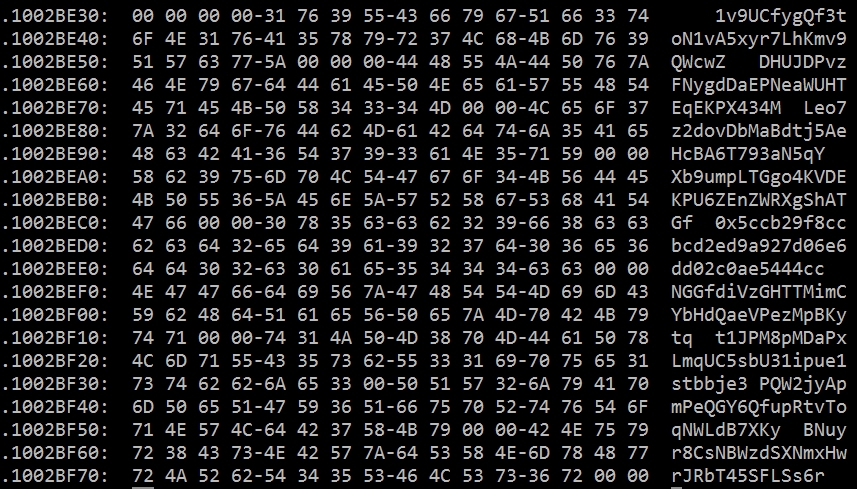 The biggest profit reaches the cybercriminals’ pockets from the users of Bitcoin wallets – at the time of writing, there were ~ 23 BTC on the balance of their wallet, which at the end of October amounted to approximately $140,000. The amounts in the remaining wallets range from tens to thousands of US dollars.

The malware described is a perfect example of a “rational” gain. The scheme of its operation is simple and effective: no access to pools, no network interaction, and no suspicious processor load.

Tales from the blockchain