Volume of spam in mail traffic

The breakdown of spam in March met expectations: the share of spam remained stable and amounted to 70% – 80% of all mail traffic on the Russian Internet. This stability is typical both of the Russian Internet and the Internet as a whole, although some Western analysts did record an increase in spam volume in March, when it reached 85% of all mail traffic.

The monthly high amounted to 83.7% and was recorded on 17 March. The monthly low for March on the Russian Internet amounted to 72% of all email on March 8th – clearly, spammers decided not many people would be reading their email on International Women’s Day. 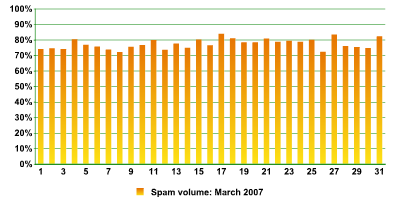 Breakdown of spam by category

The leading spam categories in March were: 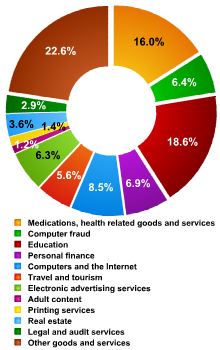 March saw a major decline in the personal finance category. Over the past six months, most spam in this category was comprised of graphical spam promoting different company stocks. In March 2007, the volume of this spam category halved. This decline was the result of a number of factors:

The number one category in March in terms of aggressive tactics and scale of mass mailings is spam that advertises inexpensive medications (Viagra, Cialis, etc.). Such messages often use the same graphical technology seen in financial spam.

Real estate spam on the rise on the Russian Internet

In early March, the Russian Internet saw the amount of real estate spam skyrocket, with offers for realtor services and announcements about renting or buying apartments, houses, warehouses, plots of land and more. This particular type of spam is peculiar to the Russian Internet, and the vast majority of messages are in Russian.

During the first 10 days of the month, this spam category shot up from a stable 2% – 3% to 7% of all unwanted email before falling back down to its usual volume.

It’s hard to say what caused the sudden, brief growth in this category in the beginning of the month (it could very well be that this was the result of a successful advertising campaign by spammers offering their services). However, regardless of the reasons behind the increase, the fact that real estate spam makes up a steady percentage of mail traffic on the Russian Internet is interesting in itself, and demonstrates that those working in real estate are willing to consider spam as a business tool.

The volume of graphical spam started to fall slightly in the beginning of the year. In January it represented 33% of all spam, falling to 27% in February and falling again to 25.7% in March. This decline is partly due to the decrease in financial spam. On the other hand, spammers continue to actively use graphics in advertisements for inexpensive medications, software and diplomas. Consequently, a sharp drop in the volume of graphical spam isn’t likely anytime soon.