Kaspersky Lab has been tracking a targeted attack actor’s activities in Japan and South Korea recently. This attacker has been using the XXMM malware toolkit, which was named after an original project path revealed through a pdb string inside the file: “C:\Users\123\documents\visual studio 2010\Projects\xxmm2\Release\test2.pdb”. We came across an unusual technique used by a sample which contained no pdb strings but was very similar to a variant of XXMM malware in terms of code similarity, malware functionality, crypto-algorithm, data structures and module configuration.

The malware sample we observed was named “srvhost.exe” to resemble a standard system process name. It came from one of our partners at the beginning of 2017. One of the most surprising features of the malware was its file size, which is not commonly seen in malware – it was over 100MB. According to our analysis, this malware is a Trojan loader component that activates a backdoor. We could not confirm pdb strings from this malware, however the backdoor module seems to be named “wali” by the author, according to strings from the embedded config block.

The wali loader decrypts the embedded wali backdoor using the “\x63” byte and a simple XOR operation. The XOR key is not only “\x63”, we confirmed others. Then, the wali backdoor module is injected into the memory of the iexplore.exe process by the loader.

What is inside the wali loader that makes it so big in size? The reason is that this sample has a very big overlay of junk data. We found more than 20 other similar samples (wali loader + overlay) using open source intelligence and by searching our malware collection using YARA rule. After removing the overlay, there were only six unique samples.

The overlay data is generated by the wali dropper when the wali loader is installed onto the victim’s machine. The following figure shows the structure of malware components and how they are related to each other:

Wali dropper2 checks if the user account has admin privileges, and decrypts the wali loader using the same algorithm and the same key as of dropper1, and creating new files using the following file paths:

It also appends generated garbage data to the overlay as well, using the same function. Finally, it creates a registry value of “sunUpdate” in  “HKEY_LOCAL_MACHINE\Software\Microsoft\Windows\CurrentVersion\Run” to ensure malware persistence.

The feature to appending junk data to the malware executable to inflate the file size is quite unique to wali dropper1 and wali dropper2. We assume that by creating a large file the authors wanted to avoid AV detection, complicate sample exchange and stay below the radar of the most commonly used YARA rules. The function that generates the junk data is shown below: 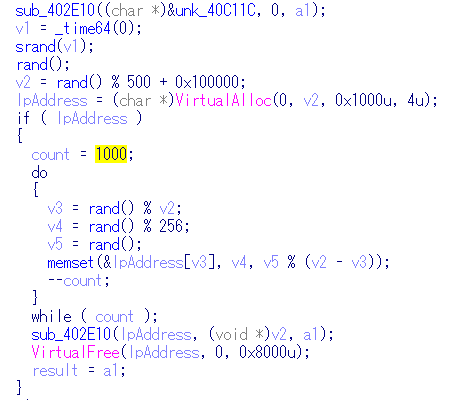 The create_garbage_data function generates a random byte in a loop with 1,000 iterations. In every iteration it fills blocks of data of random length within certain dynamically calculated limits. After that the result of create_garbage_data is written to the overlay of the decrypted wali loader and the process is repeated 100 times. This produces junk data of ~100MB which is appended to the executable.

Fig. Loop to append the junk data to overlay.

As the appended junk data is created dynamically and depends on random values, the size of it may vary. We have seen 100MB files as well as 50MB samples used in real world attacks. The largest we observed was a 200MB malware sample created with the same trick. This technique currently doesn’t affect detection of the malware by Kaspersky Lab products. The malware is detected as:

Inflating file size with garbage data is not a completely new technique. Previously polymorphic viruses and worms used this technique a lot to mix original code with garbage data spread across the malware file, sometime increasing the file size by hundreds of kilobytes and even megabytes. Certain software protectors may also insert decoy files into packed files and inflate file size up to 1MB. We have also seen executable malwares disguised as movie files and ISO files spread over torrents, which in these cases, the malware size is inflated to a few gigabytes in order to mimic true content .

What is quite unique in using this method and appending junk data to a file is that in this case this technique is used in targeted attacks and is happening after the initial infection, during the later phases of attack with the intention of increasing file size to avoid detection.

While this technique may seem inefficient in its primitive approach to bypass detection, we believe that in certain cases this malware may stay below the radar of incident responders and forensic analysts who use YARA rules to scan harddrives. The reason is that one of the common practices for YARA rule authors is to limit the size of scanned files, which is aimed mainly at improving performance of the scanning process. Large files, like the ones produced by XXMM malware, may become invisible for such rules, which is why we would like to recommend security researchers to consider this when creating rules for dropped malwares.