In the beginning there were only malware and machines to be infected, with no money in the middle – only a will to get “fame” by coding. A few years ago this situation changed drastically and today the cybercrime ecosystem is much more complicated, including as much as 7 key elements. This starts with the coders, who only develop the malware, then sell it to other criminals while offering service support. The criminals who buy it distribute it among other cybercriminals and money mules.

What’s the problem here? In general the AV industry still fights the same way as 15 or more years ago. We detect more amounts of advanced malware yet more appears every day. It’s like cutting a weed but leaving the root – it just grows up again and again…

What happened on the 1st day at VB is that we saw a series of presentations dedicated to how to deal with this modern state of cybercrime. Mikko Hypponen from F-Secure, along with Bob Burls of the Police Central e-Crime Unit (Metropolitan police) delivered a keynote speech about the m00p gang joint investigation and their experiences. The message was clear – it’s time to fight cybercrime. 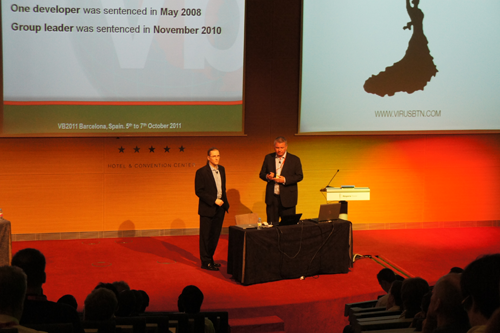 Right after that I delivered a presentation called “A look at the cybercrime ecosystem and the way it works” and it was about the current moves of cybercriminals, how well they are organized and what type of people are behind it. As an example I presented real data – pictures,habits, nicknames, real names and other stuff of the most relevant criminals from Latin America and in Europe. I also analyzed current limitations in terms of laws to fight cybercrime in Mexico, Brazil and Russia. Before my presentation I did not have any conversation with Mikko but the message was exactly the same – it’s time to fight not only bad files but also bad people aka cybercriminals.

Finally my colleague Fabio Assolini showed how cybercriminals from Brazil steal money today and have quite a comfortable life, some of them moving from city to city each month, recruiting money mules and using their stolen cash to live the highlife. They buy luxury cars and stay in the most expensive hotels. They don’t have any fear of being punished and are only living their lives to steal money every single day. The situation gets worse when the countries we noted lack a legal system that persecutes online theft and cybercrime. The feeling of impunity is really strong. The case Fabio presented showed that the same bad guy was already arrested 3 times and again and again he’s set free.

There are some ideas about how to make our job better (pulling out the weed’s roots). For now, it’s mainly plans, but maybe the time has come to do more radical fighting against cybercrime. What do you all think?

Malware isn’t only malware anymore… our participation at VB2011