Today while conducting research on the alleged Latvian power hack, I came across some interesting malvertising on imageshack, where pictures of the purported hack have been hosted. 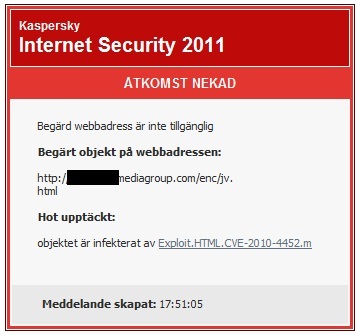 Advertising on the page loads a exploitable Java vulnerability that Kaspersky recognizes as Exploit.HTML.CVE.2010-4452.m, which then tries to download Trojan.win32.TDSS.cgir. TDSS as some of you may recognize is a rootkit that can access Windows at its lowest levels and can prove extremely difficult to remove.

Kaspersky already detects both the exploit, as well as the Trojan payload. This serves as a reminder of the importance of keeping your Anti-virus up to date.

We will update with further details as they become available.