Perhaps the worst possible scenario is when a bank website is hosting malicious ads: you never know what can be installed and when on your computer if you click on the ad banners.

Something similar happens with security websites hosting malicious ads. They are supposed to be for security information. The people browsing such sites trust the content to be safe, but in actual fact because of the ad banners the resources may be anything but trustworthy. 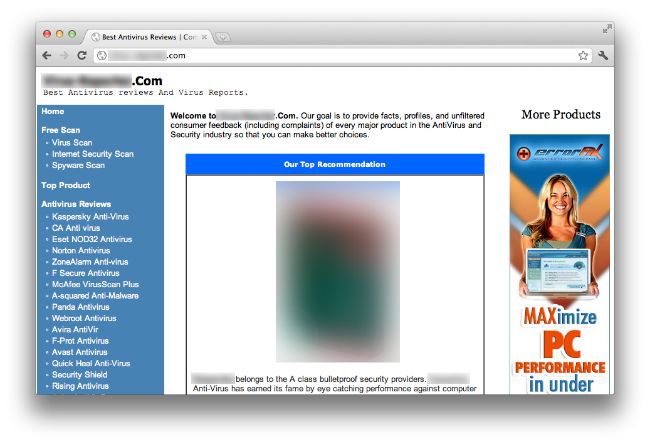 The site above was found by looking for antivirus protection and reviews. The banner to the right of the screenshot leads to a malicious app, which is basically a rogue optimizer, forcing the final user to pay for activation. So what is actually going on here? Basically, while looking for security and protection the end user may end up with a nasty infection and lose money by paying for rogue apps. The scheme used here is the same as in Fake AV attacks – “detecting” things you even don’t have in your file system and then asking for money to cure them.

If you want to check AV reviews, it’s better to visit well-known, trusted resources like
av-comparatives.org, av-test.org and virusbtn.com

Kaspersky Anti-Virus detects the threat mentioned above as Trojan-FakeAV.Win32.ErrorFix.