Today, cybercriminals are quick to exploit vulnerabilities in Adobe Reader, Flash and Java to infect users’ computers. There is a simple reason for this popularity: exploits of vulnerabilities found in these products can infect computers regardless of which operating systems and browsers are used on the attacked machines. We assumed that the threats posed to users were unaffected by their choice of browser and undertook a little research to test this assumption. 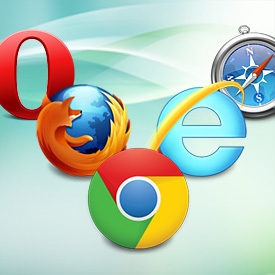 KSN, Kaspersky Lab’s cloud service, collects anonymous statistics about any threat detected on the computers of those who agree to have their data collected and transferred. This information is subsequently used to block unknown malicious programs, which is again done via the cloud.

For research purposes, we singled out 10.5 million computers in various locations around the globe. These computers regularly supply KSN (http://ksn.kaspersky.com) with information about malicious code detected on the Internet.

When web-based threats such as malicious scripts, exploits and infected files are detected on a server, etc. by a web browser that is trying to access them, KSN receives information about the name of the browser and its MD5. By analyzing the KSN data, we can obtain statistics about the browsers installed on our client’s computers.

The most popular browser

For starters, here are the figures showing the popularity of different browsers installed on our sample computers:

The popularity rating for browsers installed on users’ computers

Google Chrome has the highest number of users. This result is in line with the findings of several other studies (http://en.wikipedia.org/wiki/Usage_share_of_web_browsers).

We also found that:

We looked at which browsers are installed by users according to operating system.

Information about the operating systems and browsers installed on users’ computers

It should be noted that “home” versions of operating systems are typically used by regular home users. Professional versions of Windows XP and Windows 7 are generally preferred by so-called “advanced” users.

What are the threats?

Continuing our research, we compiled ratings for the threats most often encountered by the users of each browser.

In the leading positions in the Top 20 we find antivirus verdicts which indicate groups of malicious objects:

In these ratings, we also see which malicious programs are most often detected on the computers of users who use specific browsers.

On the computers of Firefox users, exploits of vulnerabilities in Adobe software are most often detected: Exploit.JS.Pdfka, Trojan-Downloader.JS.Expack, Exploit.SWF.CVE-2011-0611.

The users of Internet Explorer most often encounter the adware browser extension not-a-virus:WebToolbar.Win32.MyWebSearch and the malicious adware Trojan.JS.Popupper.

Opera users are more likely than others to encounter the malicious program Trojan-Downloader.SWF.Voleydaytor.h, which is deployed by cybercriminals on compromised sites.

Nothing in particular stood out when it came to malware statistics for SAFARI users.

The differences in these lists of malware are partly accounted for by browser operation quirks, e.g. in the way browsers handle PDF files or use ‘sandbox’ technology.

The results are also affected by different online behavior exhibited by different categories of users. ‘Advanced’ users, for instance, are more active online compared to home users, and are more likely, therefore, to end up on sites containing exploits.

Let us compare the number of notifications about repelled attacks in browsers.

Number of threats blocked in browser

Although Internet Explorer is the second most popular, it is second to last in terms of blocked threats.

If we compare the number of attacks that an average user of each browser encountered in September, we get the following picture: 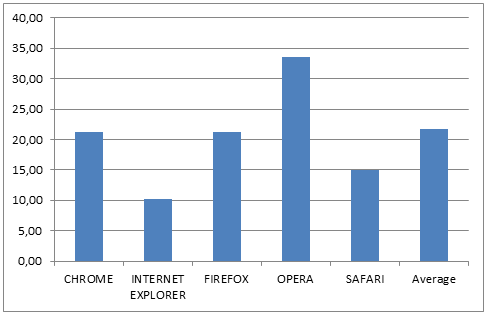 As seen in the diagram, the average numbers of attacks repelled on the computers of Chrome and Firefox users are very similar, and almost the same as the average for all browser users.

Internet Explorer users faced the fewest attacks, while Opera users had to deal with the most.

We can presume that home users who prefer Internet Explorer typically visit a limited number of popular sites. Consequently, their computers are less frequently attacked by cybercriminals than the computers of ‘advanced’ users of other browsers who tend to display riskier online behavior.

In conclusion, we would like to make a few important points:

Naturally, this research is not complete as there was no analysis of the geographic distribution of browser users; also, the threats lumped together under heuristic and behavior verdicts require further analysis. This may be the subject of future publications. For now, I would like to thank Yuri Namestnikov and Kaspersky Lab’s Database Design and Development Group , whose participation was essential throughout this research!

KSN: An Analysis of Web Browsers