Despite CCTV and the risk of being caught by security staff, attacks on ATMs using a direct connection — so-called black box attacks — are still popular with cybercriminals. The main reason is the low “entry requirements” for would-be cyber-robbers: specialized sites offer both the necessary tools and how-to instructions.

Kaspersky Lab’ experts investigated one such toolkit, dubbed KoffeyMaker, in 2017-2018, when a number of Eastern European banks turned to us for assistance after their ATMs were quickly and almost freely raided. It soon became clear that we were dealing with a black box attack — a cybercriminal opened the ATM, connected a laptop to the cash dispenser, closed the ATM, and left the crime scene, leaving the device inside. Further investigation revealed the “crime instrument” to be a laptop with ATM dispenser drivers and a patched KDIAG tool; remote access was provided through a connection to a USB GPRS modem. The operating system was Windows, most likely XP, ME, or 7 for better driver compatibility. 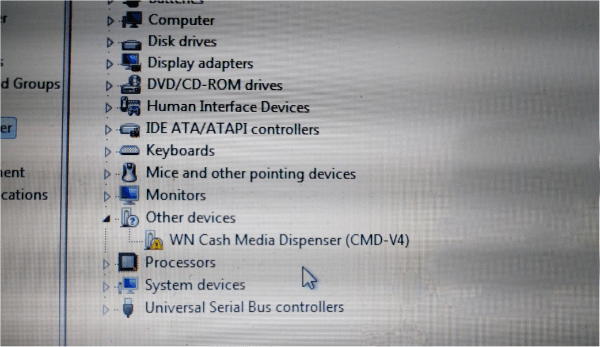 ATM dispenser connected to a computer without the necessary drivers

The situation then unfolded according to the usual scenario: the cybercriminal returned at the appointed hour and pretended to use the ATM, while an accomplice remotely connected to the hidden laptop, ran the KDIAG tool, and instructed the dispenser to issue banknotes. The attacker took the money and later retrieved the laptop, too. The whole operation could well be done solo, but the scheme whereby a “mule” handles the cash and ATM side, while a second “jackpotter” provides technical support for a share of the loot, is more common. A single ATM can spit out tens of thousands of dollars, and only hardware encryption between an ATM PC and its dispenser can prevent an attack from occurring.

Overall, the attack was reminiscent of Cutlet Maker, which we described last year, except for the software tools. We were able to reproduce all the steps of KoffeyMaker in our test lab. All the required software was found without too much difficulty. Legitimate tools were used to carry out the attack with the exception of the patched KDIAG utility, which Kaspersky Lab products detect as RiskTool.Win32.DIAGK.a. Note that the same version of this program was previously used by cybercriminals from the Carbanak group.