In June, we saw an explosive rise in the number of Koobface modifications – the number of variants we detected jumped from 324 at the end of May to nearly 1000 by the end of June. And this weekend brought another flood, bringing us up to 1049 at the time of writing. 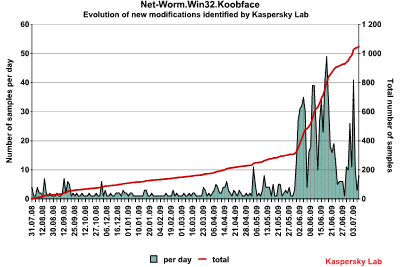 Normally the increase in the number of malicious programs slows a bit over the summer with lots of people (virus writers, cybercriminals etc.) taking a bit of time off. But in the case of Koobface, the opposite has happened. This is probably because cybercriminals have realized that spreading malware via social networking sites is very effective.

June 2009 is an important milestone in the history of social network malware; the activity we’ve seen this month far exceeds anything we’ve previous seen. With everyone who’s anyone now having a Facebook page, Twitter account or similar, the pool of potential victims is growing day by day – just take a look at the Alexa stats for Facebook. So naturally, cybercriminals are going to be targeting these sites more and more often.

Koobface on the rise