The new year has started rather badly for the Bitcoin world. On January 4th, a cyber-attack against Bitstamp, one of the biggest bitcoin exchanges in the world, resulted in the loss of almost 19,000 BTC – the equivalent of more than $5 million. 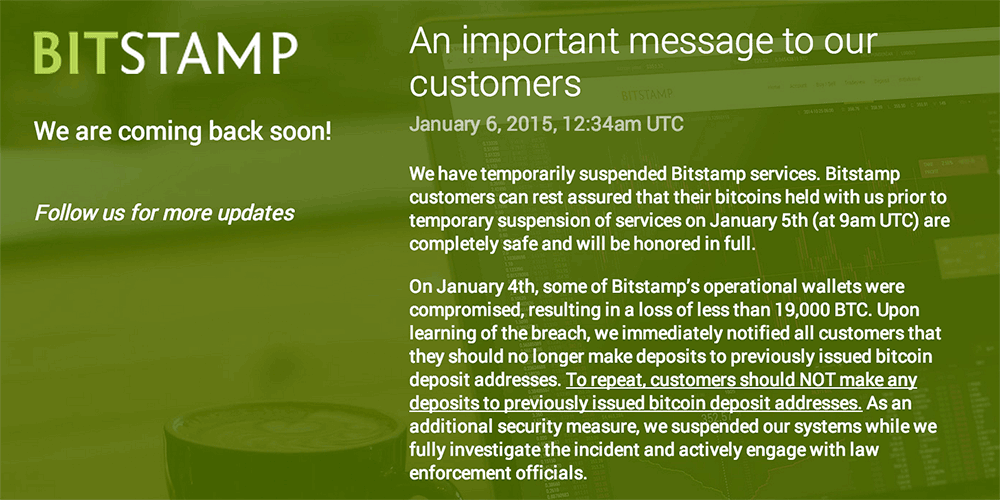 While very little is known at the moment about how the attackers managed to pull off this latest bitcoin heist, Bitstamp is assuring their customers that all of their bitcoins remain safe. The company states that “this breach represents a small fraction of Bitstamp’s total bitcoin reserves“, so hopefully covering the losses shouldn’t be a problem for them.

Because of the irreversible nature of bitcoin transactions, the only thing Bitcoin enthusiasts can do right now is to sit and watch how the attackers are emptying the address used to collect the stolen bitcoins.

You can follow the thieves’ transactions by yourself here: https://blockchain.info/address/1L2JsXHPMYuAa9ugvHGLwkdstCPUDemNCf

Right now, the attackers are most likely trying to move those bitcoins around through as many addresses as possible, and then will proceed to launder the stolen coins by using so-called “mixing” services

Bitstamp seems to have been much better prepared for such an incident compared to Mt. Gox, so while the price of Bitcoin was of course impacted, the impact was not that big. Part of the reason is that bitcoins are currently trading at prices that haven’t been seen since the autumn of 2013 anyway, between $250 and $300 for 1 BTC.

Taking into account these cyber attacks, we conclude that in 2015 security will continue to remain the most important thing for Bitcoin exchanges and enthusiasts.

Our advice is to diversify and try and minimize the time in which your bitcoins are hosted by anyone else except yourself. Bitcoin exchanges and third party wallet providers seem to act as a magnet for attackers, so it’s better to take the security of your bitcoins in your own hands.

Make sure to check out our tips on How to Keep Your Bitcoins Safe.