Wipers attacking Saudi organizations and beyond

Beginning in November 2016, Kaspersky Lab observed a new wave of wiper attacks directed at multiple targets in the Middle East. The malware used in the new attacks was a variant of the infamous Shamoon worm that targeted Saudi Aramco and Rasgas back in 2012.

Dormant for four years, one of the most mysterious wipers in history has returned.

Also known as Disttrack, Shamoon is a highly destructive malware family that effectively wipes the victim machine. A group known as the Cutting Sword of Justice took credit for the Saudi Aramco attack by posting a Pastebin message on the day of the attack (back in 2012), and justified the attack as a measure against the Saudi monarchy. 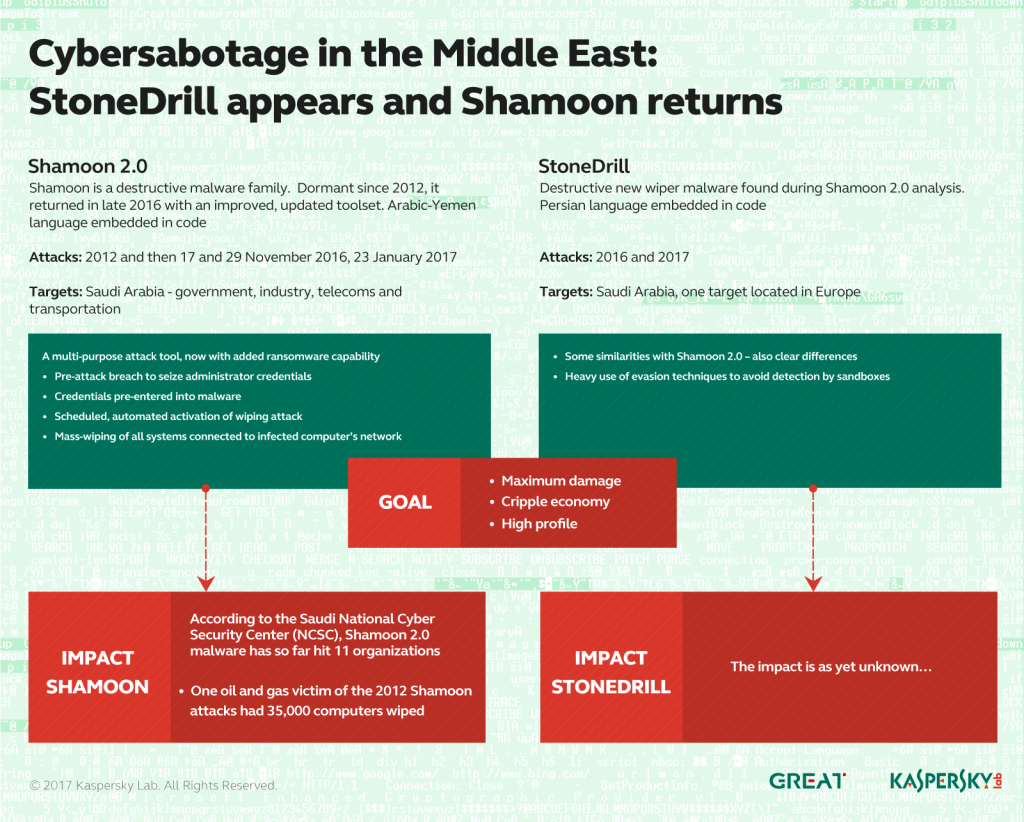 The new attacks share many similarities with the 2012 wave and now feature new tools and techniques. During the first stage, the attackers obtain administrator credentials for the victim’s network. Next, they build a custom wiper (Shamoon 2.0) which leverages these credentials to spread widely inside the organization. Finally, on a predefined date, the wiper activates, rendering the infected machines completely inoperable. It should be noted that the final stages of the attacks are completely automated, without the need for communication with the command and control center.

While investigating the Shamoon 2.0 attacks, Kaspersky Lab also discovered a previously unknown wiper malware which appears to be targeting organizations in Saudi Arabia. We’re calling this new wiper StoneDrill. StoneDrill has several “style” similarities to Shamoon, with multiple interesting factors and techniques to allow for the better evasion of detection. In addition to suspected Saudi targets, one victim of StoneDrill was observed on the Kaspersky Security Network (KSN) in Europe. This makes us believe the threat actor behind StoneDrill is expanding its wiping operations from the Middle East to Europe.

To summarize some of the characteristics of the new wiper attacks, for both Shamoon and StoneDrill:

We are releasing a full technical report that provides new insights into the Shamoon 2.0 and StoneDrill attacks, including:

Our discovery of StoneDrill provides another dimension to the existing wave of wiper attacks against Saudi organizations that started with Shamoon 2.0 in November 2016. Compared to the new Shamoon 2.0 variants, the most significant difference is the lack of a disk driver used for direct access during the destructive step. Nevertheless, one does not necessarily need raw disk access to perform destructive functions at file level, which the malware implements quite successfully. 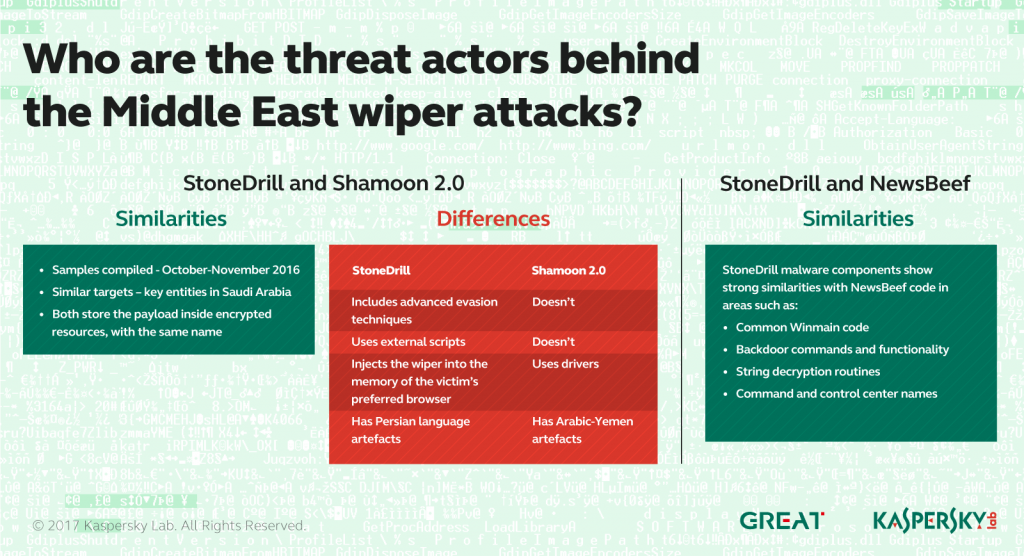 Of course, one of the most important questions here is the connection between Shamoon and StoneDrill. Both wipers appear to have been used against Saudi organizations during a similar timeframe of October-November 2016. Several theories are possible here:

Taking all factors into account, our opinion is that the most likely theory is the second.

Additionally, StoneDrill appears to be connected with previously reported NewsBeef activity, which continues to target Saudi organizations. From this point of view, NewsBeef and StoneDrill appear to be continuously focused on targeting Saudi interests, while Shamoon is a flashy, come-and-go high impact tool.

Finally, many unanswered question remain in regards to StoneDrill and NewsBeef. The discovery of the StoneDrill wiper in Europe is a significant sign that the group is expanding its destructive attacks outside the Middle East. The target for the attack appears to be a large corporation with a wide area of activity in the petro-chemical sector, with no apparent connection or interest in Saudi Arabia.

As usual, we will continue to monitor the Shamoon, StoneDrill and NewsBeef attacks.

A presentation about StoneDrill will be given at the Kaspersky Security Analyst Summit Conference in April 2-6, 2017.

Kaspersky Lab products detect the Shamoon and StoneDrill samples as: