On April 14-15, 2021, Kaspersky technologies detected a wave of highly targeted attacks against multiple companies. Closer analysis revealed that all these attacks exploited a chain of Google Chrome and Microsoft Windows zero-day exploits. While we were not able to retrieve the exploit used for remote code execution (RCE) in the Chrome web browser, we were able to find and analyze an elevation of privilege (EoP) exploit that was used to escape the sandbox and obtain system privileges.

All of the observed attacks were conducted through Chrome browser. Unfortunately, we were unable to retrieve the JavaScript with full exploit code, but the timeframe of attacks and events preceding it led us to suspect one particular vulnerability.

On April 6-8, 2021 the Pwn2Own competition took place. This is a computer hacking contest where the Google Chrome web browser was one of the targets. According to the ZDI (Zero Day Initiative, the organizer of Pwn2Own) website, one participating team was able to demonstrate a successful exploitation of the Chrome renderer process using a Typer Mismatch bug.

On April 12, 2021, the developers of Chromium committed two (issue 1196683, issue 1195777) Typer-related bug fixes to the open-source repository of V8 – a JavaScript engine used by Chrome and Chromium web browsers. One of these bug fixes (issue 1196683) was intended to patch a vulnerability that was used during Pwn2Own, and both bug fixes were committed together with regression tests – JavaScript files to trigger these vulnerabilities. Later on the same day, a user with the Twitter handle @r4j0x00 published a working remote code execution exploit on GitHub, targeting an up-to-date version of Google Chrome. That exploit used a vulnerability from issue 1196683 to execute a shellcode in the context of the browser renderer process. 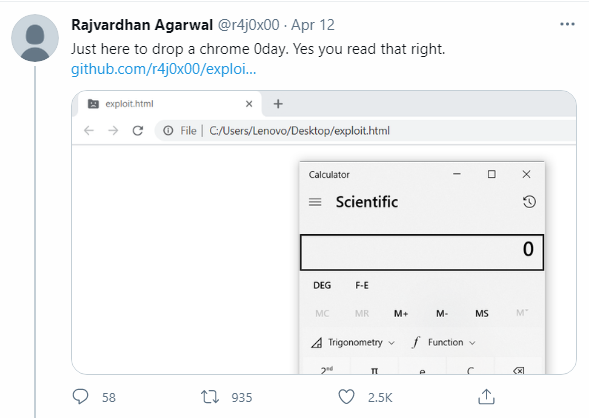 Screenshot of tweet with Chrome zero-day published on April 12, 2021

The published exploit didn’t contain a sandbox escape exploit and was therefore intended to work only when the browser was launched with the command line option –no-sandbox. 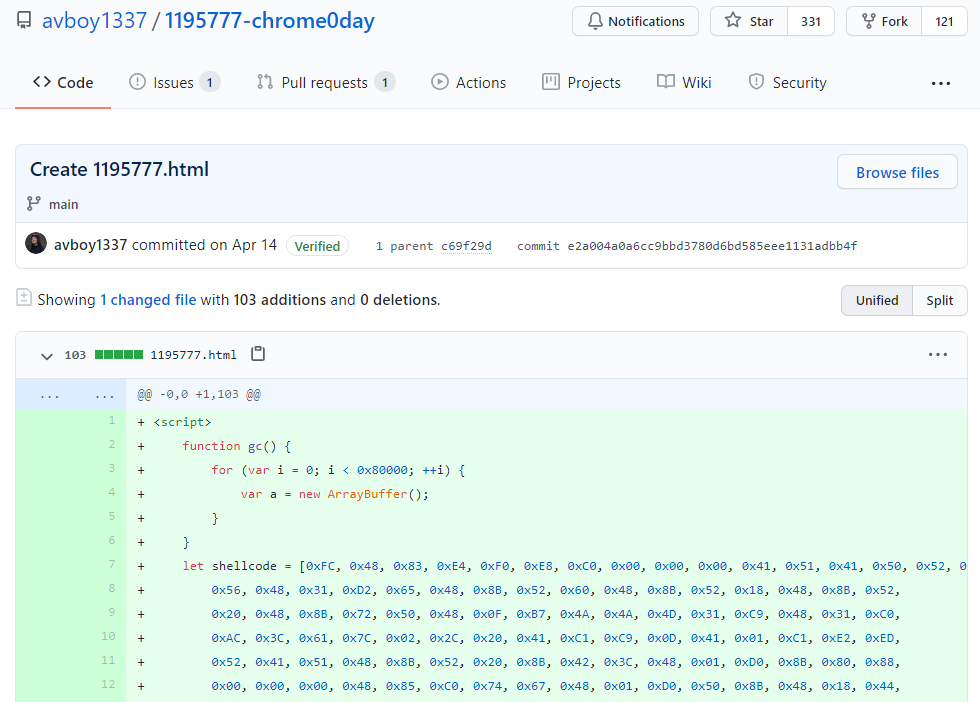 Screenshot of GitHub repository with Chrome zero-day published on April 14, 2021

We suspect the attackers were also able to use this JavaScript file with regression test to develop the exploit (or acquire it from someone else) and were probably using CVE-2021-21224 in their attacks.

It’s noteworthy that this vulnerability can be observed in code that was available on GitHub for a few years before we caught it in the wild and Microsoft patched it. 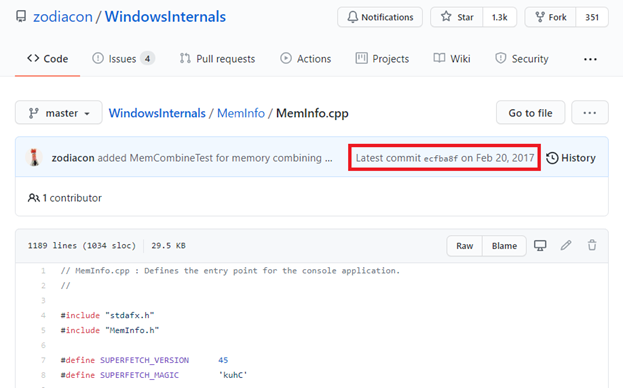 The exploit uses CVE-2021-31956 along with Windows Notification Facility (WNF) to create arbitrary memory read and write primitives. We are planning to publish more information about this technique in the future.

Besides the aforementioned exploits, the full attack chain consists of four additional malware modules, which will be referred to as:

The stager module is used to notify that exploitation was successful. It also downloads and executes a more complex malware dropper module from a remote server. Each stager module is delivered to the victim with a personalized configuration blob that defines the C&C URL, Session ID, keys to decrypt the next stage of malware, and other information.

All the stager module samples that we’ve discovered so far were configured to use the same URL address – hxxps://p{removed}/metrika_upload/index.php – to download the encrypted malware dropper module.

We believe there is a chance that the remote code execution JavaScript exploit was also hosted on the same legitimate-looking geopolitical news portal, but we found no evidence of a classic watering hole attack. The victimology suggests a highly targeted delivery of exploits.

The dropper module is used to install two executables that pretend to be legitimate files belonging to Microsoft Windows OS. One of these files (%SYSTEM%\WmiPrvMon.exe) is registered as a service and is used as a launcher for the second executable. This second executable (%SYSTEM%\wmimon.dll) has the functionality of a remote shell and can be considered the main payload of the attack. We couldn’t find any similarities between this and other known malware.

None of the artifacts we analyzed appear to have strong connections to any known threat actors. The only similarity to CHAINSHOT we observed is the “PreviousMode” technique, although this is publicly known and may be used by various groups. We are calling the threat actor behind these attacks PuzzleMaker.

Kaspersky products detect this exploit and malware modules with the verdicts:

Kaspersky products detected these attacks with the help of the Behavioral Detection Engine and the Exploit Prevention component. Over the past few years, we have built a multitude of exploit protection technologies into our products that have detected many zero-days, repeatedly proving their effectiveness. We will continue to improve defenses for our users by enhancing technologies and working with third-party vendors to patch vulnerabilities, making the internet more secure for everyone.

More information about these attacks and the actor behind them is available to customers of the Kaspersky Intelligence Reporting service. Contact: intelreports@kaspersky.com.

Kaspersky would like to thank Microsoft for their prompt analysis of the report and patches.