Over the last decade DKIM signatures have become an important technology in the extensive list of methods for fighting against spam. Despite the fact that many users have no idea what the term DKIM even means, it is exactly this system that behind the scenes keeps our mailboxes guarded from various types of unsolicited mail, as well as protects a part of the world mail traffic from being wrongly labeled as “spam”.

In this article we investigate the structure of DKIM in perspective from its emergence all the way up to nowadays. We also reveal the main advantages and downsides of this piece of technology, as well as explore typical spammers’ tricks for forging DKIM signatures.

DKIM technology (DomainKeys Identified Mail) provides a sender verification and guarantees the integrity of the delivered email. The verification is based on the electronic message signature which is generated with asymmetric cryptography. This signature is added to the service headers and is transferred transparently for the end user.

DKIM signature validation occurs automatically on the user side. It relies on the data extracted from the DKIM header as well as on the public encryption key retrieved from the sender’s DNS domain name records. The message might be marked as scam, phishing, or suspicious if the specified domain name was not authorized to send this message, depending on the user’s policies. Email clients are more loyal to the correspondence with successfully validated DKIM headers, as opposed to the messages with failed DKIM verification. In the meantime, emails without any DKIM headers are processed in the standard mode.

The history of DKIM starts in 2003 with an independent technology DomainKeys (DKIM ancestor) developed by Mark Delany as a part of his work at Yahoo. Two years later Yahoo is granted a patent for Domainkeys, and a wide range of vendors starts to prepare the first recommendatory version of DKIM standard.

In parallel with the DomainKeys development in 2003-2007, Cisco creates their own project “Identified Internet Mail” (IIM), based on a similar concept of authentication with the message signature.

Despite the fact that new standard had been published, by the year 2012 numerous companies were still using a deprecated 2007-year version of standard. This created a lot of interesting research on potential vulnerabilities in DKIM which we discuss below. 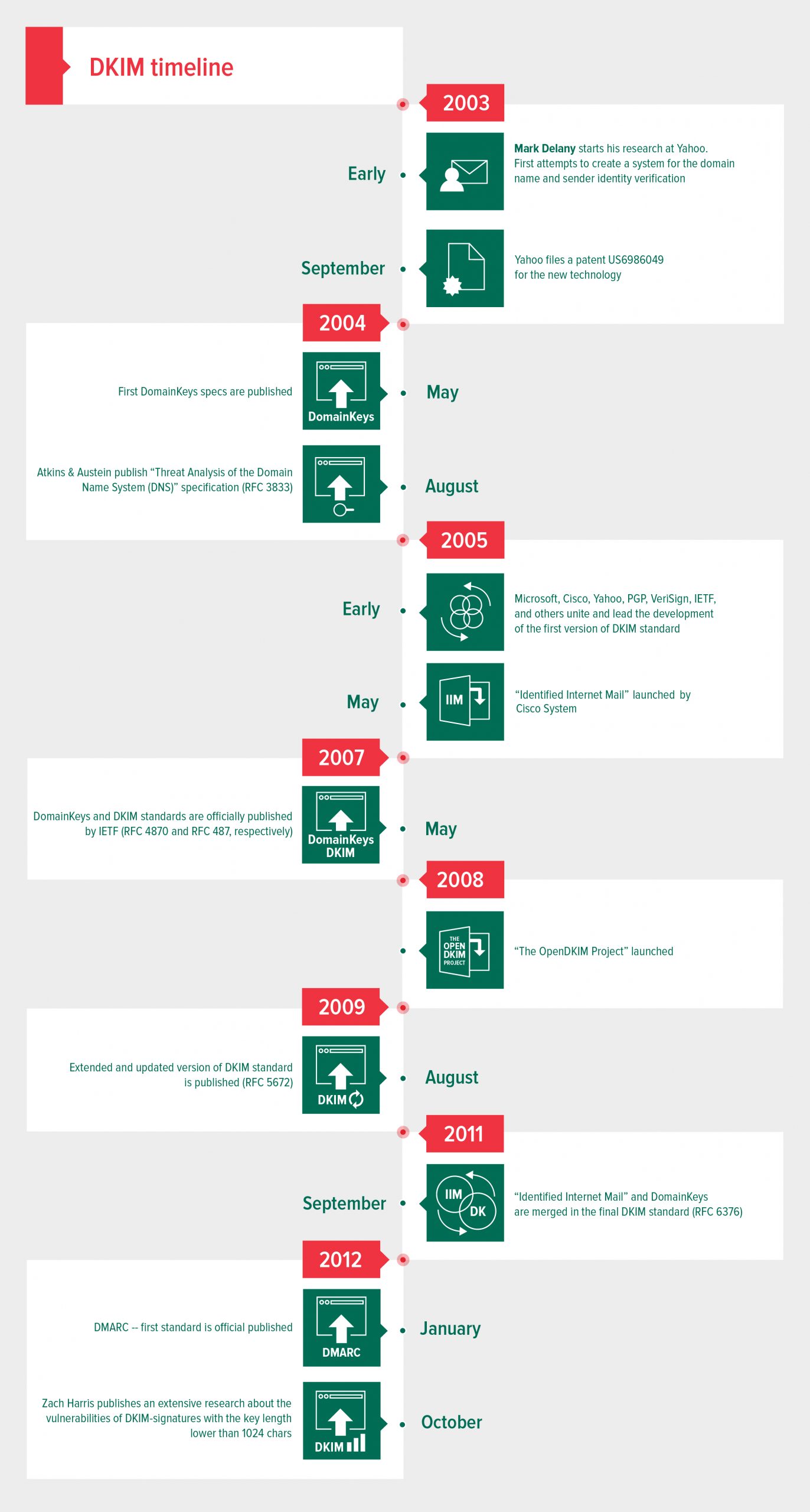 DKIM is based on the standard asymmetric encryption. 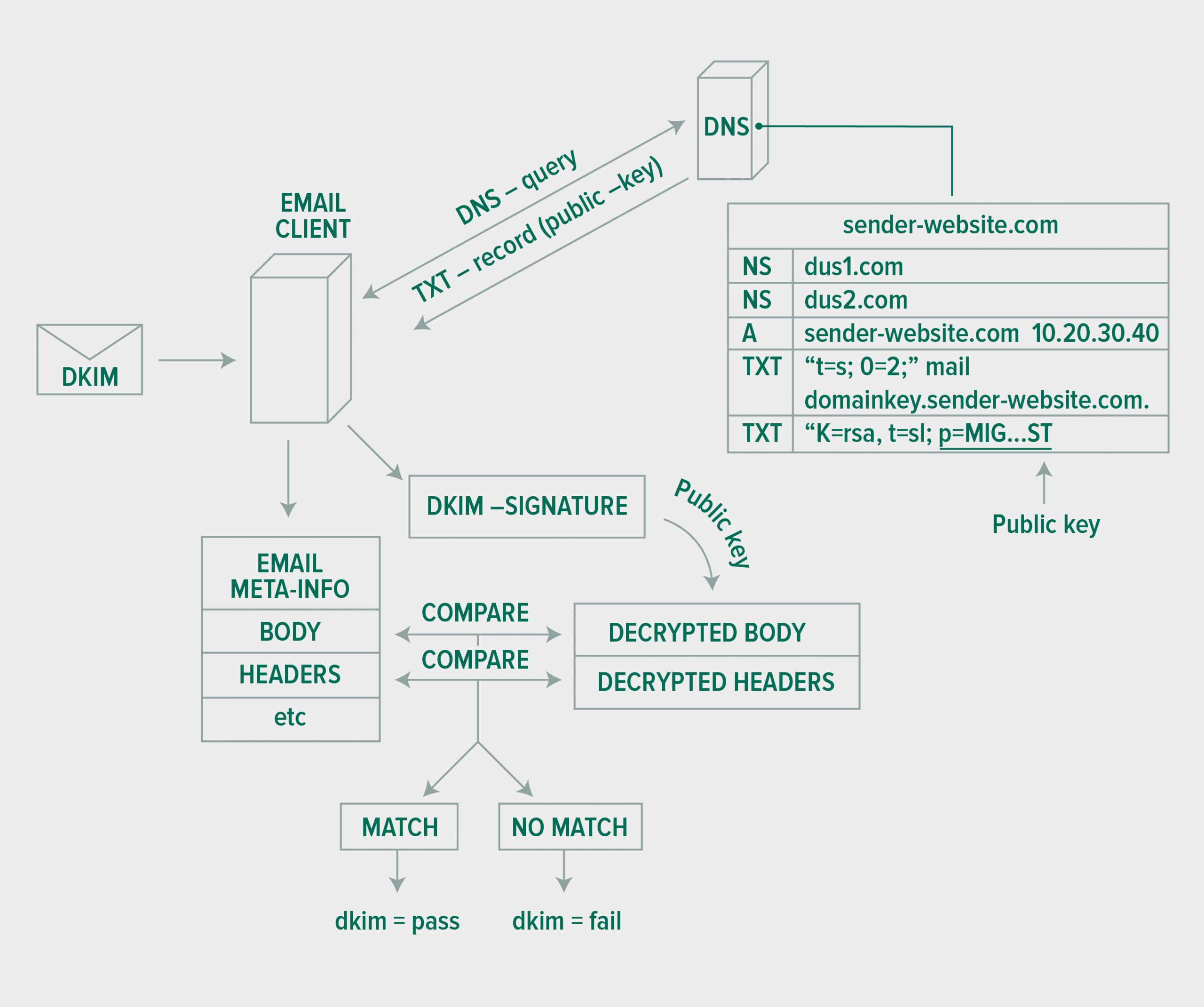 Typical DKIM signature headers comprises of a list of tags like “tag=value”. Tags names have short names and usually are 1-2 characters long.

First attempts to use DKIM by spammers were observed by us back in 2009. Originally, spammers tried to add headers with content that was far away from valid DKIM signatures. Spammers paid very small attention to the accuracy of the signature, what created some pretty interesting cases.

For example, spammers used the same header for all emails in this spam mailing (the genuine DKIM headers are actually different for non-identical messages since each of them is based the message body, headers, timestamps, and other unique factors).

Other spam samples show how spammers copied DKIM signature from the legitimate third-party website and for every email changed content of only one DKIM-tag, completely forgetting that other tags also depend on the message content and should have different values as well.

Similar mistakes systematically appeared in spam throughout the last years.

Some of the most popular of them:

Spammers are capable of setting up their own mail servers and domains in order to generate legitimate DKIM headers as the average system administrator would do. In spite of that, valid DKIM headers have been fairly uncommon in spam until recently.

This is largely due to the complexity of the installation process of the DKIM server side for the valid signatures generation. However, the number of domain names involved in the spam activity has increased significantly over time, therefore attacks on DKIM have become more efficient and profitable for spammers. For these reasons spammers had to learn how to skillfully operate DNS-records of their numerous domains.

In the example below we can see a perfectly valid DKIM signature along with a correct domain’s  TXT-record which lead to the “dkim=pass” verdict when coupled together. 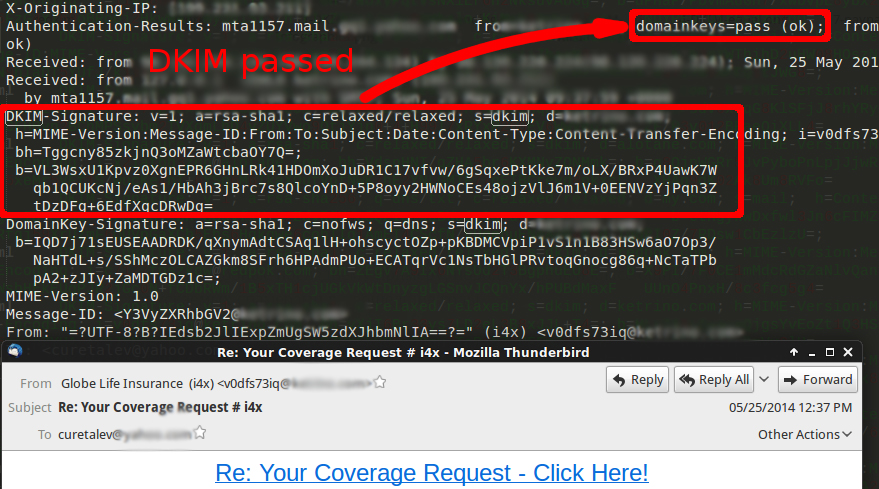 This extra work appears to be reasonable enough for spammers since many email services are more loyal to the messages with correct DKIM signatures, and spammers’ mail eventually has higher chances not to be banned by anti-spam filters and end up in the user’s mailbox.

In addition to simple checks for the “DKIM=fail” verdict in message headers, our Kaspersky Security for Linux Mail Server detects all email spam with mentioned spammers tricks. It either detects this mail as spam and forwards straight to the junk folder  or increases the spam rate of the message.

Vulnerabilities and weaknesses of DKIM

It is not reasonable to rely solely on DKIM for the following reasons:

а) Spammers, as well as the average users, can correctly configure DKIM on their own website.
b) It is possible that some of mail coming from a single domain name does not have any DKIM headers. One example might be if the domain uses multiple mail servers with different configurations, although there might be many other scenarios.

Because of these reasons, the standard advises not to “penalize” any mail without DKIM signatures.

DKIM signature becomes invalid when the headers order is even slightly modified, when new headers are added, or when headers had any minor changes in their content. These kinds of changes are quite common and occur when the message is processed by the server-forwarder on the way to the recipient.

All DKIM signatures signed with private keys shorter than 1024 bits in length are vulnerable according to the research by Zach Harris published in Wired in October 2012. Moreover, Harris managed to crack the 384-bit authentication in just 24 hours using his laptop only. You can read about other requirements to DKIM in our blog article about this news.

Interestingly enough, Harris had successfully sent emails to Google founders Sergey Brin and Larry Page in 2012 by spoofing their DKIM headers and formatting messages as their personal correspondence between each other.

Recently, numerous companies including Google and Microsoft started to intensively promote the use of encryption keys with the sufficient length. Despite that, there are still a great number of insecure mail servers signing DKIM headers with private keys of not cryptographically strong lengths.

How to use DKIM?

DKIM is used in combination with other technologies of mail reputational analysis. The majority of modern email services and mail clients already support DKIM verification. However, it is useful to ensure that DKIM is configured correctly if you use your own domain name, or if you want to set up DKIM on your own mail server.

Many corporate email services support DKIM installation with only several clicks required. However, the domain administrator will have to manually edit the DNS zone file to add corresponding TXT-records.

For example, this is how the DKIM activation process looks like for Gmail for Work service.

Final content of the zone record should be similar to:

This record authorizes Google servers to send mail from your domain name, and therefore the reversed verification on the recipient side will result in the spf=pass verdict.

If you have any problems with installation, the DKIM installation manual and SPF record manual from Google Apps should be helpful. For the details on the zone file editing, refer to your domain name registrant documentation.

DKIM installation on your own mail server

Setting up DKIM on your own mail server is a less trivial process. We will give a short explanation of the DKIM installation procedure for Postfix mail agent on the server with Debian-like distribution. DKIM installation for other mail servers and OS is analogous. For more details, refer to the documentation on the interested email client and the information at the OpenDKIM project website.

Store the generated key to the arbitrary file in the server directory with limited access and specify the path to it in the configuration file below.

You can validate the TXT-record of your domain with a simple request using host tool:

However, take into account it might take up to several hours to have your TXT-record updated because DNS providers cache data on their side.

The majority of public email services support DKIM signatures, validate them transparently for the user, and use the received verdicts for their own anti-spam systems.

For example, Gmail service marks emails with a ‘secured connection’ icon if the sender is verified and this email passes some internal validations for the sender.

You can enable this functionality in Settings → Labs → Authentication icon for verified senders.

As another example, Yandex.Mail service supports DKIM-indicators by default. It shows the

icon when this email has a valid electronic signature.

DKIM technology has various competitors and has become a basis for other sender authentication solutions.

SPF also uses DNS for storing information, and is a tool for verification the sender’s domain. As opposed to DKIM, SPF stores not the public key in DNS records, but the list of the servers authorized to send email messages. Overall, SPF allows to verify the authenticity of the domain name, but not the message text or its headers.

Nonetheless, SPF technology is more widespread than DKIM and is supported by the vast majority of mail clients and email services.

PGP is currently the most popular algorithm for email encryption in the world. It allows to encrypt the entire message under assumption that both sides generate public/private keys in advance and exchange the public keys. DKIM does not try to compete with PGP while being just an extension of the ordinary concept of email-message with the ability to validate the sender.

DMARC is a relatively fresh authentication method that combines both SPF and DKIM technologies. This system was presented for the first time in 2011 and numerous top vendors expressed interest in it. In 2013 DMARC was already protecting more than half of the world mailbox while still not yet being an official standard, which once again proves the success of DKIM technology that underlies DMARC.

DKIM technology on guard of your mail