SolarWinds, a well-known IT managed services provider, has recently become a victim of a cyberattack. Their product Orion Platform, a solution for monitoring and managing their customers’ IT infrastructure, was compromised by threat actors. This resulted in the deployment of a custom Sunburst backdoor on the networks of more than 18,000 SolarWinds customers, with many large corporations and government entities among the victims.

According to our Threat Intelligence data, the victims of this sophisticated supply-chain attack were located all around the globe: the Americas, Europe, Middle East, Africa and Asia.

After the initial compromise, the attackers appear to have chosen the most valuable targets among their victims. The companies that appeared to be of special interest to the malicious actors may have been subjected to deployment of additional persistent malware.

Overall, the evidence available to date suggests that the SolarWinds supply-chain attack was designed in a professional manner. The perpetrators behind the attack made it a priority to stay undetected for as long as possible: after the installation, the Sunburst malware lies dormant for an extended period of time, keeping a low profile and thwarting automated sandbox-type analysis and detection. Additionally, the backdoor utilizes a sophisticated scheme for victim reporting, validation and upgrading which resembles methods involved in some other notorious supply-chain attacks.

Read more about our research on Sunburst malware here. Additional reports and indicators of compromise are available to our Threat Intelligence Portal customers.

How to protect your organization against this threat

The detection logic has been improved in all our solutions to ensure that our customers remain protected. We continue to investigate this attack using our Threat Intelligence and we will add additional detection logic once they are required.

Our products protect against this threat and detect it with the following names: 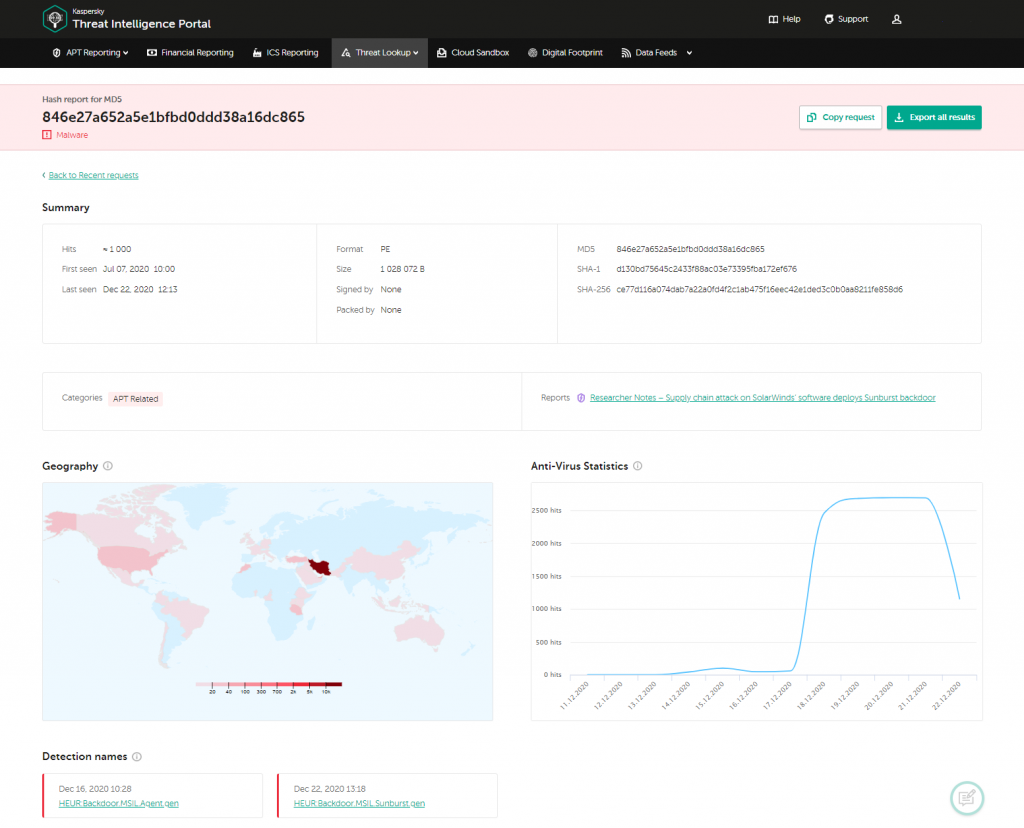 Our Behavior Detection component detects activity of the trojanized library as PDM:Trojan.Win32.Generic.

Our Endpoint Detection and Response (Expert) platform can be helpful in looking for and identifying traces of this attack. The customer can search for Indicators of Compromise (such as hashes or domain names) with an .ioc file or directly with the Threat Hunting interface: 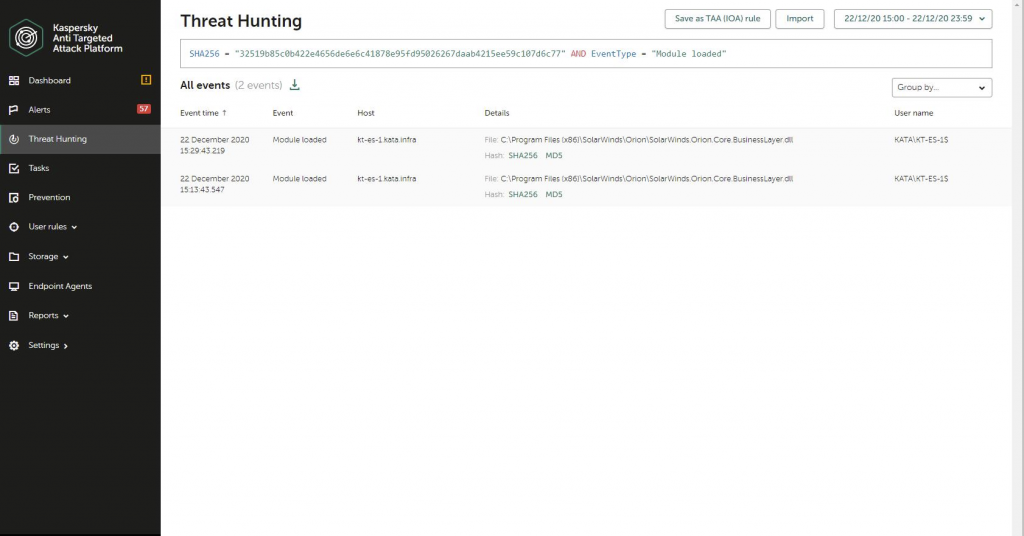 Or, customers can use the IoA Tag, which we have added specifically for this attack: 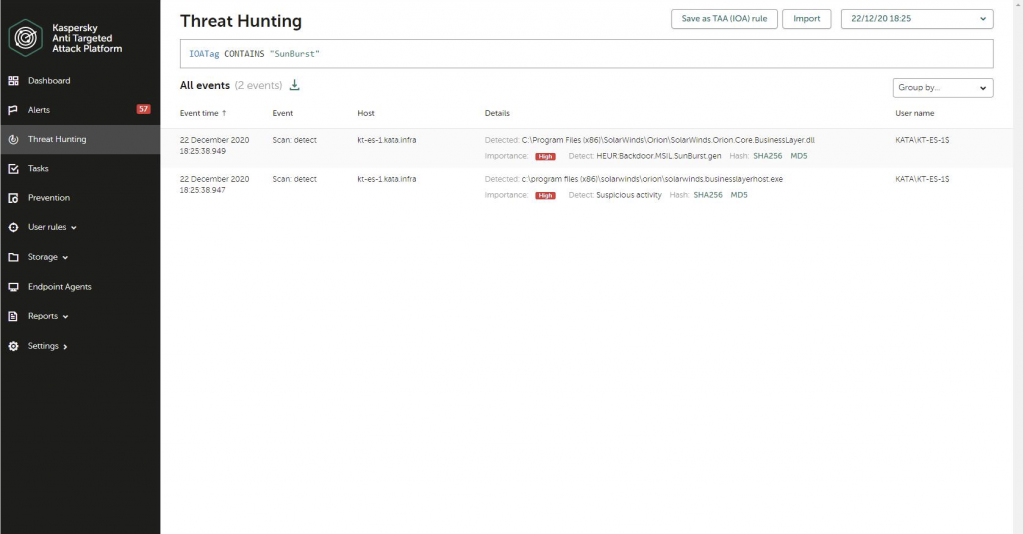 This rule marks endpoint detections for Sunburst to make it more clearly visible to security officers: 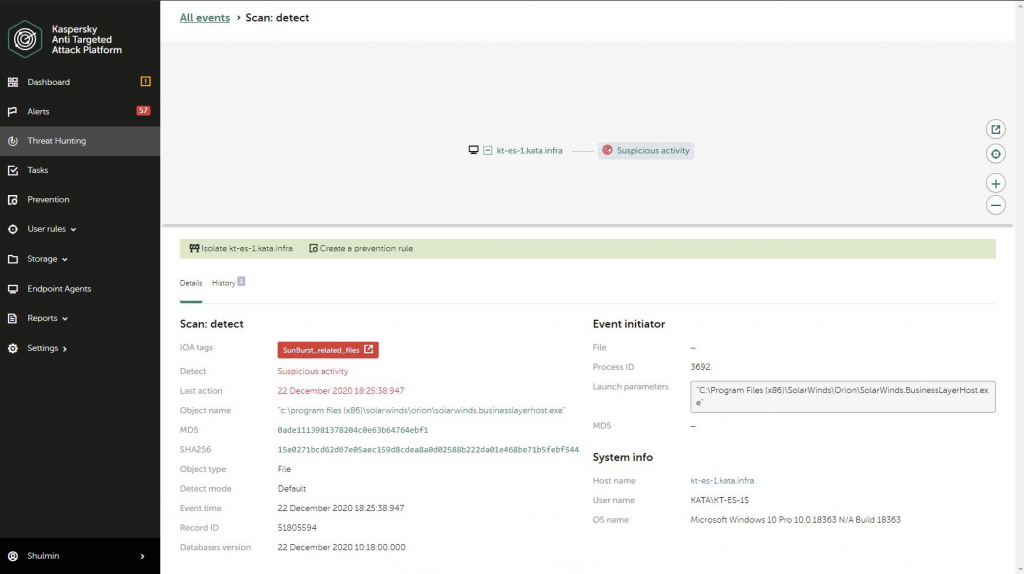 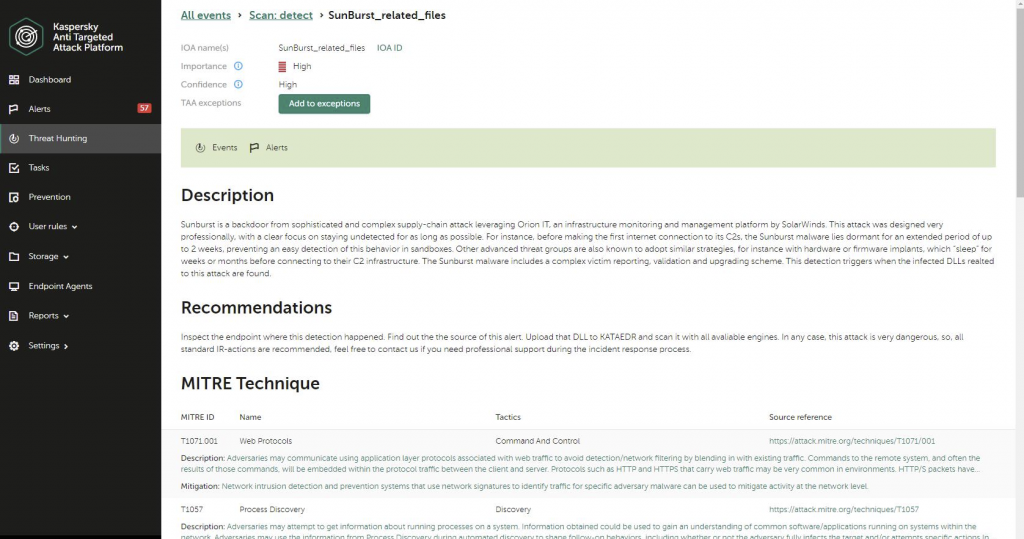 Our Kaspersky Anti-Targeted Attack Platform detects Sunburst traffic with a set of IDS rules with the following verdicts:

Our Managed Detection and Response service is also able to identify and stop this attack by using threat hunting rules to spot various activities that can be performed by the Sunburst backdoor as well as detections from Kaspersky Endpoint Security.

How we protect our users against the Sunburst backdoor