It is a malicious file that when opened shows its victims the following content: 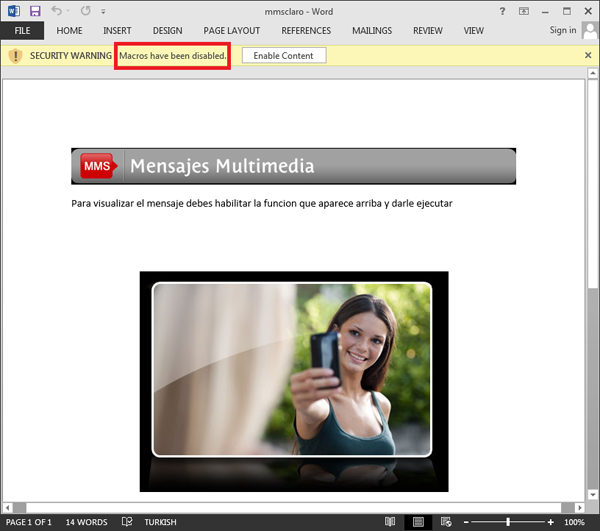 If macros are enabled and a victim clicks on the message to supposedly download an MMS message, two pieces of malware are installed into the machines of victims.

When it is extracted from the main .docm file, it has two different urls downloading two different pieces of malware. Each image in the macro-enabled file downloads different malware when the victim clicks on it.
The first malware is downloaded from the same malicious server located in Panama and the second one from the Dropbox cloud.

Kaspersky Anti-Virus detects both malicious files under the Trojan.MSIL.Agent family.

What is interesting here?

It is interesting to notice that one of the downloaded malicious MSIL.Agents also has the same user name under the source path inside of the compiled binary:

What does this mean? It means that Latin American cybercriminals are probably not only in touch with cybercriminals from Eastern Europe but from Turkey too.
Today, some advanced cybercriminals use exploits to infect the machines of victims, but as you can see from this example, this may be a waste of money since the old school tricks still work for them. If you do not believe me, just see how on January 10, when the file was submitted for the first time to VirusTotal, it registered 0 of 48 detections and at the time of writing this post only 2 of 50 anti-virus solutions detected this malicious sample: