Step 1: How this started

While I was investigating the Trojan.JS.Iframe.aeq case (see blogpost) one of the files dropped by the Exploit Kit was an Applet exploiting a vulnerability:

So basically I unzipped the .jar and took a look using JD-GUI, a java decompiler. These were the resulting classes inside the .jar file: 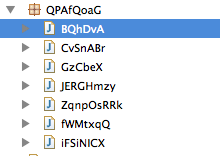 The class names are weird, but nothing unusual. Usually the Manifest states the entry point (main class) of the applet. In this case there was no manifest, but we could see this in the applet call from the html:

The third parameter was the .exe that the applet drops. There was no real need to explore any more deeply just to get an overview of what the applet does. However the point here was to analyze the vulnerability that this .jar file exploits.

At this point I should say that I was biased. I had read a McAfee report (http://kc.mcafee.com/resources/sites/MCAFEE/content/live/PRODUCT_DOCUMENTATION/24000/PD24588/en_US/McAfee_Labs_Threat_Advisory_STYX_Exploit_Kit.pdf) about a similar campaign using the same Exploit kit. In this report they said that the malware dropped by this particular HTML inside the kit was CVE-2013-0422.

Usually the first clue which might confirm this would be verdicts from AV vendors, but this time it was not the case:

Ok, so let’s take a look at the decompiled code, starting from the entry point. We can confirm that the ZqnpOsRRk class is implementing the Applet:

But quickly we see that something is not working. The names of the classes and methods are random and the strings obfuscated, but this is nothing to worry about. However in this case we see that the decompiler is showing strange “code”:

Or it is not able to decompile methods of the class directly and is just showing up the bytecode as comments:

Now I was starting to wonder how bad the situation was? Could I still get enough information to discover which CVE is exploited by this .jar?

Time for some serious digging!

I started to rename the classes based on their first letters (ZqnpOsRRk to Z, CvSnABr to C, etc) and to match the methods with what I thought they were doing. It’s much like any RE using IDA.

There was a lot of “strange” code around, which got strange interpretations from the decompiler. I decided to delete it to tidy up the task.

Of course, there was a risk that I might delete something important, but this time it looked like misinterpretations of the bytecode, dead code and unused variables. So I deleted things like:

Where I saw commented bytecode (not decompiled by JD-GUI), I deleted everything but the references to functions/classes.

At the end I had a much cleaner code, but I was very worried that I might be missing important parts. For instance, I had procedures which just returned NULL, function which just declared variables, unused variables, etc.

How much of this, if any, was part of the expolit and how much was just badly interpreted code?

At least I was able to get something useful after cleaning the code. I was able to localize the function used to deobfuscate the strings:

Not exactly rocket science. Now I could decompile all the strings, but I still didn’t have a clear idea of what was happening in this .jar.

Seeing that the code was not decompiled properly I remembered that to check which vulnerability is being exploited you don’t really need a fully decompiled code. Finding the right clues can point you to the right exploit. At this point I thought that it might be CVE-2013-0422, so I decided to get more information about this vulnerability and see if I could find something in the code to confirm this.

This CVE was discovered in January 2013. Oracle was having a bad time just then, and shortly afterwards a few other Java vulnerabilities were exposed.

I downloaded a few samples from VirusTotal with this CVE. All of them were easily decompiled and I saw some ways to implement this vulnerability. But there was no big clue.

I decided also to try a few other decompilers, but still got no results.

However when taking a second look at the results of running a now-obsolete JAD I saw that the decompiled code was quite different from the one of JD-GUI, even though it was still incomplete and unreadable.

But there were different calls with obfuscated strings to the deobfuscation function.

The applet uses a class loader with the obfuscated strings to avoid detection, making it difficult to know what it is loading without the properly decompiled strings. But now I had all of them!

After running the script I got:

Now this was much more clear and familiar to me. I had another look at one of the PDFs I was just reading and bingo!

In these cases it is always possible to take another approach and do some dynamic analysis debugging the code. If you want to go this way I recommend reading this for the setup:

However, I couldn’t stop thinking about why all the decompilers failed with this code. Let’s take a look at the decompiled bytecode manually. We can easily get it like this:

Let’s take a look to the code we get and what it means, with an eye on the decompiled code. We will need this:

and the decompiled code with the corresponding instruction numbers:

So we can see how a method which just provides returns leaves a lot of garbage in the middle. The decompiler cannot handle this and tries to interpret all these operations, these anti-decompilation artifacts. It just adds a lot of extra noise to the final results. We can safely delete all this.

There are TONS of these artifacts in the bytecode. Here a few examples:

There are also a lot of nonsense jumps, such as push NULL then jump if null, gotos and nops.

Basically it’s difficult to delete these constructors from the bytecode because the parameters are different and don’t always throw up the same opcodes. It’s up to the decompiler to get rid of this dead code.

After a couple of hours manually cleaning the code and reconstructing it from the bytecodes, I could finally read the result and compare it with the original decompiled one. Now I understood what was happening and what was wrong with the original code I could safely delete the dead code and introduce readable names for classes and methods.

But there was still one unanswered question: why was the first decompiler unable to deobfuscate all the strings, and why did I have to use JAD to get everything?

JD-GUI returns the bytecode of the methods that it cannot decompile but for instructions such as ldc (that puts a constant onto the stack) it does not include the constant along with the instruction in the output code. That’s why I couldn’t get them until I used a second decompiler. For example:

In the bytecode, happily, we can find all these references and complete the job.

When I was working in this binary I remembered a presentation in BH 2012 about anti-decompiling techniques used for Android binaries. This was the first time I had personally encountered a Java binary implementing something similar. Even they are not that difficult to avoid, the analysis is much slower and it can be really hard to crack big binaries.

So there are two open questions: first, what can be done, from the decompiler’s perspective, to avoid these tricks? I’m hoping to discuss this with the authors of JD-GUI.

Secondly, how can we make code “undecompilable”? Are there automatic tools for this? Again, I’m hoping to find out more, but please contact me if you have anything useful to share.