There is a new malicious ongoing campaign on Skype. It-s active and kicking yet.

The infection vector is via social engineering abusing infected Skype by sending massive messages to the contacts like these ones:

Goo.gl short URL service shows that at the moment there are more than 170k clicks on the malicious URL and only 1 hour ago there were around 160k clicks. It means the campaign is quite active with around 10k clicks per hour or with 2.7 clicks per second!

The most of victims come from Russia and Ukraine: 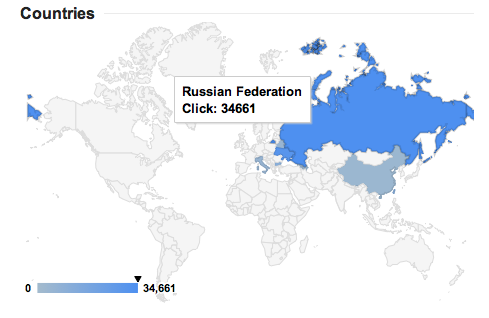 Between other most probably infected countries are: China, Italy, Bulgaria and Taiwan.
The campaign seems to be active since March 1, at least that day the short Google URL was created, however it got strength in the last hours. This graph shows the number of clicks in the last 2 hours:

So far VirusTotal shows 12 of 46 AV detection rate. Kaspersky AV detects the malicious sample by its cloud technology with the verdict UDS:DangerousObject.Multi.Generic

Now few words about malware itself. It-s written in Visual Basic. The subroutines called with human names like Lenka, Pier, Christiane, Ryann, etc. The next expressions are used as part of the social engineering in Skype:

Malware has capabilities to spread via USB too. Malware uses IRC protocol to interact with the C&C as part of the botnet once it-s infected. The string in the sample leading to the VB project file is C:\Users\s\Desktop\Must Use Different Name\HqwKH\avivah.vbp

Finally something interesting is this:

An avalanche in Skype