Kaspersky Lab’s mission is to protect the world from viruses. But the company also believes it has a duty to safeguard our children from content which could be harmful to youngsters. In order to carry out this important task, Kaspersky Lab’s products integrate a special component named Parental Control.

This component allows caring parents to control their children’s computer and Internet activity.  For example, Parental Control allows parents to easily restrict the time their children spend using the computer or surfing the web.

In addition, Parental Control enables parents to restrict the launch of certain applications and to monitor their children’s activities on social networks and chat sites. One of the most important functions of this module is to limit access to potentially harmful web resources. Many of these, of course, are adult content sites. However, social networks, forums and even online stores can also pose a threat. The module currently includes 14 different categories of sites, enabling parents to decide which are undesirable for their child. Here are the categories:

About a year ago we described how Parental Control worked with different web resources. At that time the statistics only considered resources which had been blocked by the Parental Control tools. Since then we have improved the mechanism of collecting statistical data and now we can identify the categories of sites which are most popular with youngsters, regardless of whether Parental Control allows them to visit or not.

That is why our worldwide statistics on the sites most frequently visited by children in 2013 varies considerably from the previous year’s figures. 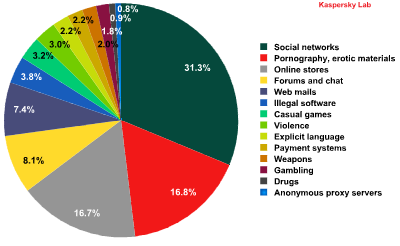 The sites most often visited by children worldwide

The raw numbers show that over the last month, children whose computer activities are regulated by the Parental Control module have attempted to access different networking sites more than 52 million times, while attempted visits to adult sites exceeded 25 million.

However, children living in different countries often have different preferences, which is why we also provide statistics on a country-by-country basis.  The period under consideration is between 1 January and 15 May 2013.

Below is a pie chart showing the distribution of sites with potentially undesirable content most often visited by the children in Russia: 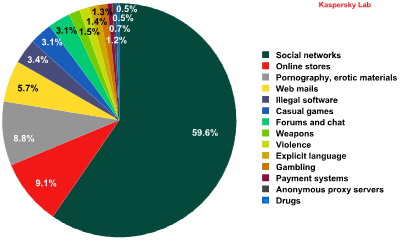 The sites most popular with children in Russia

The distribution situation in Russia is very similar to the global picture. However there are several interesting local features:

Sites about drugs (0.46%) are less popular in Russia than elsewhere in the world. E-payment systems (0.69%) are also noticeably less popular.

The picture for Germany is even less similar to the world distribution pattern: 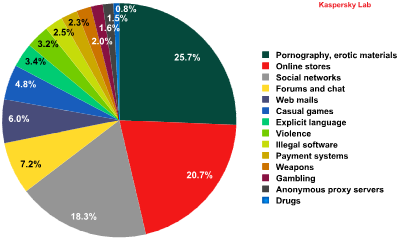 The sites most popular with children in Germany

Like many other children all over the world, German youngsters do not often visit sites with material about weapons, gambling or drugs,  which is of course encouraging. However it should be noted that social networking sites can feature materials on a huge range of topic – including these ones. 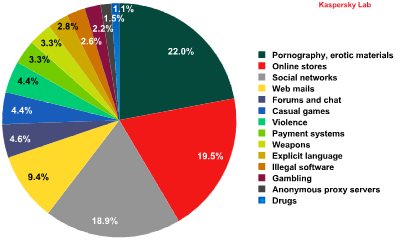 The sites most popular with children in the US

Unlike Russian children, youngsters in the USA are not very interested in Illegal software (2.6%) while chats and forums are close to the top in 5th position with 4.6% of all visits.

In the UK the distribution is as follows: 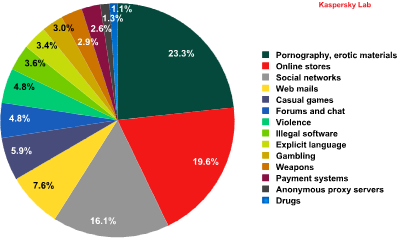 The sites most popular with children in the UK

The situation in Japan is very different from the global picture. Japanese youngsters are most interested in chats and forums (34.2%). Apparently, these sites successfully replace social networking sites which are down in 4th place (10.6%). In addition, many of this country’s most popular web resources have been created with the help of tools used for developing forums and blogs. 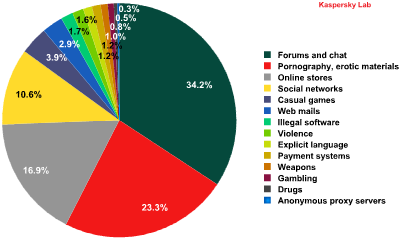 The sites most popular with children in Japan 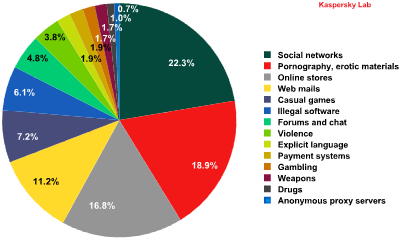 The sites most popular with children in Brazil

The least visited sites for Brazilian children are those containing information about weapons (1.7%), drugs (1%) and gambling (1.7%).

The distribution of sites most often visited by Saudi Arabian children is similar to that of the rest of the world. However, the gap between the top 3 and the rest is smaller here: 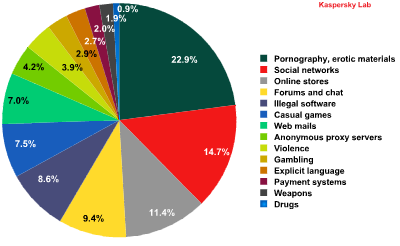 The sites most popular with children in Saudi Arabia

In Saudi Arabia, the situation with illegal software is the same as in Russia – these sites are in 5th position (8.6%)

Under the new algorithms, our statistics make it very clear that children all over the world are keen on social networking sites. In many countries this category of sites is in the Top 3 while, for example, in Russia it is far ahead of all other categories.

At the same time, parents need to understand that social networking sites can be a source of many threats from potentially harmful content to various shady characters who might show unhealthy interest in their children.

Online stores have also found a consistent position in the top 5. It can be assumed that children visit these resources in search of toys and similar products. In this situation, parents should be especially watchful – if children know where their parents keep their credit cards, they can use it for unplanned purchases. Additionally, children could become victims of the fraudsters if they accidentally reach a fake online store.

Hopefully, the statistics we have collected will help parents around the world to better understand how their kids spend time on the Internet and take appropriate security measures, such as installing and running a specialized solution such as Parental Control from Kaspersky Lab. After all, the duty of every parent is to nurture and protect their children.

What are children doing online?