From penny-stealing malware to multi-million-dollar heists, a quick overview of the bitcoin bonanza in the digital era

An interesting title felt just about right for an interesting topic when I first submitted my research paper about the evolution of bitcoin cybercrime for this year’s edition of the Virus Bulletin conference, held in the sleepless Seattle. Discussing the situation from an economic standpoint I aimed to paint a picture reflecting how the present geopolitical situation in Latin America makes the region a fertile ground for bitcoin enthusiasts, and by extension, cybercriminals. It’s certainly not easy to capture a snapshot of a phenomena that changes so rapidly and present it to a group of security experts who are already well-informed about the subject. Nevertheless, with the aid of regional statistics, incident timelines and analysis of the most interesting malware samples, there is enough information in the report to give some clear indicators about what’s been going on with the world’s most popular cryptocurrency this past year, and what we can expect in the future when it comes to bitcoin-related cybercrime.

While some early adopters have been involved in the bitcoin market from the beginning (by means of mining or simply by participating in exchanges), others are just grasping the concept of cryptocurrencies and learning about the perils of bitcoin the hard way – be it in the form of ransomware demanding a quick payment or malicious mining code consuming their limited computing resources. From wallet stealing malware to large scale bitcoin exchange heists, we can find just about anything in the cryptoworld, and this is just the beginning. Nowadays, we talk about malware and cybercrime as two sides of the same (bit)coin, usually referring to organized crews of criminals with clearly defined roles engaging in illegal activities with the sole purpose of financial profit. It makes sense then, to observe the correlation between the number of malware samples in the wild targeting bitcoin users and the price of the currency being exchanged on global markets. 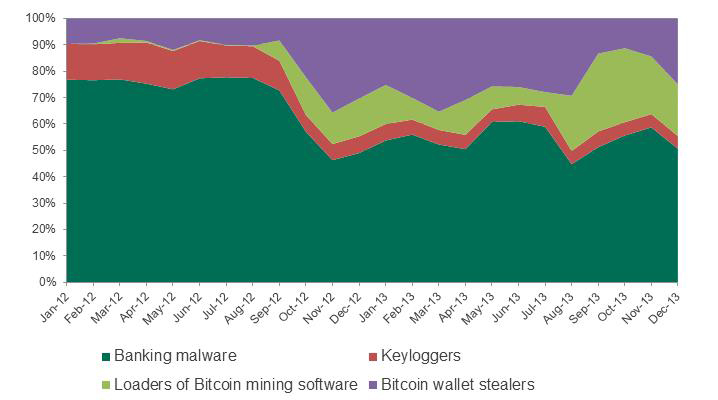 As mentioned in 2013’s Kaspersky’s Security Bulletin, our predictions for the cybercriminal bitcoin ecosystem came true – and then some: “Attacks on Bitcoin pools, exchanges and Bitcoin users will become one of the most high-profile topics of the year.  Attacks on stock exchanges will be especially popular with the fraudsters as their cost-to-income ratio is very favorable.

As for Bitcoin users, in 2014 we expect considerable growth in the number of attacks targeting their wallets. Previously, criminals infected victim computers and went on to use them for mining. However, this method is now far less effective than before while the theft of Bitcoins promises cybercriminals huge profits and complete anonymity.”

It’s a long time since we got through a week without one of the major bitcoin exchanges making headline news. We can attribute the success of some attacks to faulty technical implementations of bitcoin wallets, others relied on clever social engineering approaches, and the rest can be blamed on bad business practices and simple negligence about adhering to already proven security standards. There are just too many incidents to list, but there is a common thread uniting them all, which makes them a great body of experience for future generations of bitcoin exchanges to build on.

We have only recently seen why countries like Argentina and Brazil have become a fertile ground for the adoption of a cryptocurrency economy, and as we realize this, so have too cybercriminals. With a whole new set of frauds, scams and threats facing bitcoin holders, citizens need to be aware that keeping their savings secure in no easy task in today’s hyper connected world. Because there are no borders for cryptocurrencies, there are none for criminals either, and following the money trail means landing in Latin America, where the general audience is still widely vulnerable to many attacks seen in other parts of the world.

After the Mt. Gox incident we have witnessed targeted phishing campaigns, bitcoin community members moonlighting as private investigators, localized ransomware samples, scams, mobile miners, internet of things devices participating in botnets, and everything else that this digital bitcoin gold rush has brought upon us. 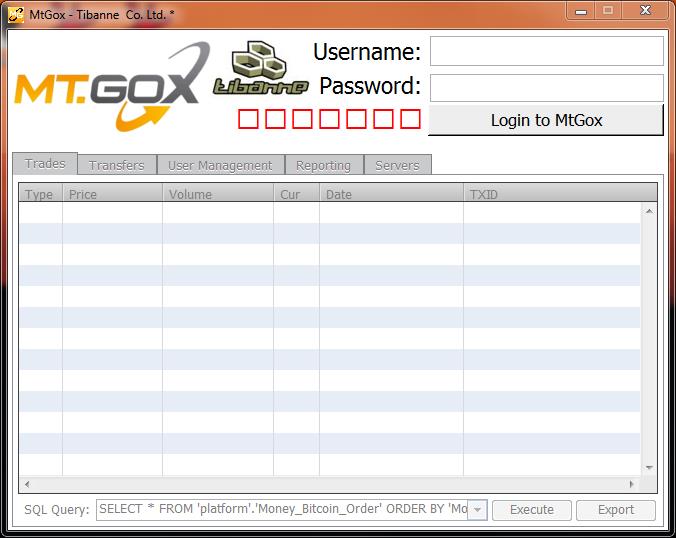 Analysis of, Malware from the Mt. Gox Leak Archive

Being your own bank is more difficult than it seems

Alchemy proved possible for cryptocurrency enthusiasts, turning energy into capital, betting on the success and global adoption of their favorite choice. Seen by outsiders as a hobby for geeks, bitcoin is more than a currency, it’s a community that has certain values ingrained and it’s revolutionizing the financial world as we currently know it.

Collective but anonymous, organized yet decentralized, this ordered chaos is beginning to make sense after all the problems it has faced. The culling of the excess exchanges that used to be available brings a Darwinian equilibrium to the bitcoin ecosystem, forcing the ones left to implement better business practices and security measures.

Malware trends indicate that cybercriminals are migrating from mining botnets and pools to more direct wallet stealing and exchange credential hijacks. The inefficient mining Trojans working on mobile devices proved that accessing the funds stored in the victim’s digital wallet can be much more straightforward than putting the effort into building a massive network of miners that reap minimal gains.

Debit Cards linked to bitcoin wallets are starting to appear and this brings another enticing entry point for criminals. With “bitwashing” services becoming more common, tracking stolen funds will prove much more difficult in the future, exposing the true anonymous nature of cryptocurrencies.

Once the de-facto choice for drug dealers and illegal markets, bitcoin is aiming to gain the global trust of other merchants, hoping that it will have a ready-made community to support it when it becomes the default standard for online and offline transactions. You can read the full paper presented at Virus Bulletin here.