In February 2014, an article was published on a popular Russian IT website under a curious title – Studying the BillGates Linux Botnet. It described a Trojan with sufficiently versatile DDoS functionality. The capability that we found the most interesting was the Trojan’s ability to conduct DNS Amplification-type attacks. In addition, it followed from the article that the Trojan had a sophisticated modular structure, something we had not seen in the world of Linux malware before.

The article also provided a link for downloading all of the Trojan’s files (taken directly from an infected machine) – which is what we did.

The archive that we downloaded contained the following files, which, according to the author of the article, were all modules of the same Trojan:

The archive with the files also contained a configuration file for cron – the Linux task scheduler. In this case, the utility is used by the Trojan as a means of getting a foothold in the system. The Trojan uses cron to perform the following tasks:

During subsequent analysis of the files, we did not find any code responsible for saving the config file for cron. Most likely, the file was manually downloaded to the victim machine by a cybercriminal after gaining remote access to the system.

The file atddd is a backdoor designed to conduct various types of DDoS attacks against the servers specified. As mentioned above, Kaspersky Lab products detect it as Backdoor.Linux.Mayday.f. The files kysapdd, skysapdd, xfsdxd, ksapdd are almost exact copies of atddd – with one exception, which is discussed later in the text.

The backdoor starts its operation by calling the function daemon(1, 0), continuing to run in the background and redirecting standard input, output and errors to /dev/null

Next, atddd collects relevant information about the system, including:

The information listed above is stored in the g_statBase structure.

After this, the backdoor decrypts strings defining the C&C server’s IP address and port number. The encryption algorithm used is very simple: an encrypted string is taken character-by-character, with 1 added to the ASCII code of a character if its number is odd and subtracted from it if the character’s number is even. As a result, the string “3/3-2/4-269-85” yields the IP-адрес “202.103.178.76”, while “2/:82” stands for port number “10991”.

After this, atddd reads configuration file fwke.cfg, which is located in the same folder with the malicious program. Information from the config file is saved in the g_fakeCfg structure. If the file does not exist, the backdoor attempts to create it and store the following information in it:

This information is subsequently sent to the C&C server and can be updated with a command from the C&C.

Next, the backdoor creates a new thread, CThreadTaskManager::ProcessMain(), in which commands to begin an attack and terminate an attack are put into the execution queue. After this, a new thread is created – CThreadHostStatus::ProcessMain(). In this thread, data on CPU and network load is updated every second and can subsequently be sent to the C&C server if requested.

After this, 20 threads are created, which read information from the task queue and, depending on the information read, launch an attack or terminate it. However, some of the threads may not be used in an attack if the relevant C&C command has a parameter (the number of threads to be used).

Then the malware enters an endless loop of processing messages from the C&C. After a connection with the C&C is established, information about system version and CPU clock rate, as well as data from the g_fakeCfg structure, is sent to the C&C every 30 seconds.

In response, the server should send 4 bytes, the first of which is the serial number of a command – from 1 to 4.

Next, if the command has parameters, the C&C sends another 4 bytes defining the amount of data that will be sent (i.e., the parameters). Then the parameters themselves are sent; their size should match the number from the previous C&C response.

About each command in greater detail:

In addition to the above, the backdoor includes several empty methods (without any code), which have curious names: CThreadAttack::EmptyConnectionAtk, CThreadAttack::FakeUserAtk, CThreadAttack::HttpAtk. Apparently, the malware writer had plans to extend the malicious program’s functionality, and this is a test version rather than a final version. The file cupsdd, which is discussed below, provides a confirmation of this.

This means that, contrary to our expectations, the files atddd, kysapdd, skysapdd, xfsdxd, ksapdd are not modules of a single piece of malware but rather different copies of the same Trojan, each connecting to its own C&C server. However, this is not the most curious part of it by far.

Like the files described above, this file is a backdoor designed to carry out various types of DDoS attacks. However, cupsdd is significantly more feature-rich and sophisticated than its ‘colleagues’, although in places its code is very similar to that found in atddd. 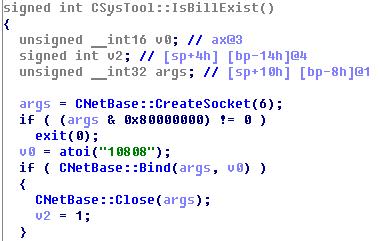 If the file is already running, its process, whose PID can be found in the file /tmp/bill.lock, is terminated (kill(pid, 9)). Then the file is dropped anyway, replacing the existing copy.

After this, the current process forks and the child process calls the function system(“/path/to/cupsddh”), which executes the file dropped.

Next, the function daemon(1, 0) is called, for the same purpose as in the case of the sample described above (atddd).

Then, if flag g_iIsService == 1, the backdoor sets itself to run at system startup by creating the following script named DbSecuritySpt in /etc/init.d/:

The malware also creates symbolic links to the script in /etc/rc[1-5].1/S97DbSecuritySpt 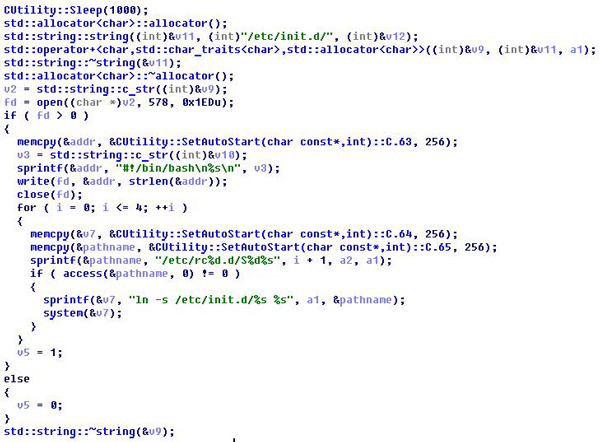 Next, the malware reads the configuration file conf.n (if it exists) from the same folder as the one in which cupsdd is located. The first 4 bytes of the file define the size of the data which follows. All the data is stored in the structure g_cnfgDoing.

Then the malware reads the file containing commands – cmd.n. The format is the same as in conf.n. The data is stored in the structure g_cmdDoing.

After this, the malware obtains all the necessary information about the system, including:

All the data is stored in the structure g_statBase.

Next, a new stream, CThreadTaskGates::ProcessMain, is created, in which the following commands are processed: 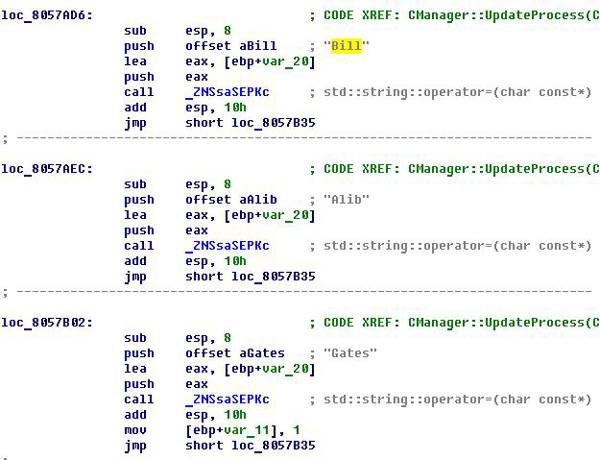 The C&C responds by sending 4 bytes containing the length (in bytes) of the file that will be transferred next. Then the C&C transfers the file itself in 1024-byte packets.

First, the file is saved in the /tmp folder under a random name consisting of digits. Then, depending on the file that was received, the existing file cupsdd (or cupsddh) is replaced or the file is copied to /usr/lib/libamplify.so

Next, the temporary file is deleted from /tmp, and the chmod command is used to set 755 permissions for the resulting file. After this, in the case of updating cupsddh, the active process is terminated and the new file is launched. In the case of updating cupsdd, the final stage (starting from copying a file from /tmp) is carried out by cupsddh, to which the relevant command is sent.

Next, the backdoor starts several threads, in which it simultaneously performs several additional operations:

Next, the main thread enters the loop of receiving and processing commands from the C&C server. There are two possibilities in this case, depending on the g_iGatsIsFx flag: 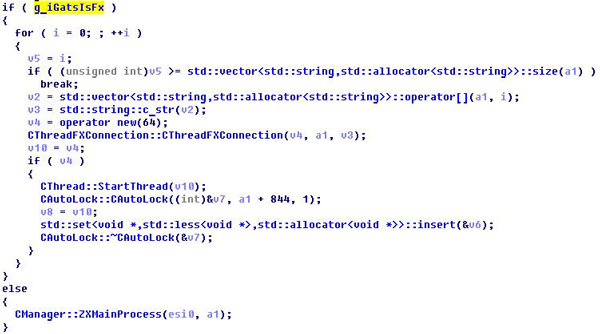 Commands received from the C&C are divided into two queues: either for execution in the current module (in the thread CThreadTaskGates described above) or for passing to the cupsddh module (thread CThreadConnSender).

The file is packed with UPX. After being unpacked, it calls daemon(1,0). It creates the file /tmp/bill.lock, in which it stores the PID of the current process. cupsddh stores system data in the structure g_statBase, which is identical to that used by cupsdd.

Next, it populates the structure g_provinceDns with the IP addresses of DNS servers converted to binary data in network byte order using the function inet_addr(), taking data from the string array g_sProvinceDns (offset in unpacked file: 0x8f44с, size 4608 bytes).

cupsddh executes command “insmod /usr/lib/xpacket.ko” in an attempt to load the kernel module into the kernel. However, the file is not present on ‘clean’ systems, and the malware does not make any attempt to download it or obtain it in any other way.

Next, data from the file /usr/libamplify.so (as it turns out, this is not a library but one more config file) is loaded into the structure g_AmpResource. The file has the following format: 1st dword is the number of dwords that follow. Apparently, it contains the list of IP addresses for DNS servers that are currently relevant, i.e., those suitable for DNS Amplification type DDoS attacks.

The following commands are possible:

This mode uses pktgen, a kernel-level packet generator built into Linux. Its advantage to the attacker is that traffic is generated with the greatest speed possible for the given network interface. In addition, the packets generated in this way cannot be detected using ordinary sniffers, e.g., the standard tcpdump, since packets are generated at kernel level.

The packet generator is controlled using a set of scripts/configs in the /proc/net/pktgen folder, but the module pktgen must first be loaded into the kernel by calling the command “modprobe pktgen”. However, I did not find any such calls. Apparently, the call “insmod /usr/lib/xpacket.ko” is used instead, although, as mentioned above, the file is absent from the system by default. As a result, kernel mode is not operational in this version of the malware.

Nevertheless, the malware attempts to write several files to the /proc/net/pktgen folder, namely:

As in the case of atddd, normal attack mode uses raw sockets.

The following attack types are possible in this mode:

The last attack type on the list above is different in that packets are sent to vulnerable DNS servers, with the attack target specified as the sender’s IP address. As a result, the cybercriminal sends a small packet with a DNS request and the DNS server responds to the attack target with a significantly larger packet. The list of vulnerable DNS servers is stored in the file libamplify.so, which is written to disk following the relevant command from the C&C.

This version of the Trojan appeared a little later and is probably currently the latest. Essentially, this is the same cupsdd, only a little ‘shaped up’. Overall, there is more logic in the code, plus there are a couple of new functions.

The most significant changes were made to the Gates module, i.e., the file cupsdd. Now it has three operating modes. The choice of mode is based on the folder from which the file is launched. Specifically, if it is launched from /usr/bin/pojie, then monitoring mode is enabled, otherwise the module operates in installation and updating mode, which is later superseded by the mode in which it controls the Bill module. 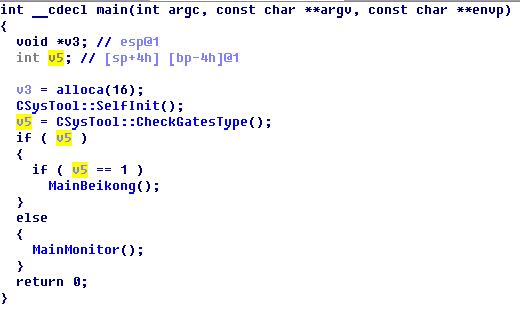 To summarize, in the new version of the Trojan its authors have added a little ‘robustness’ without making any significant functionality changes.