On 28 January 2017, John Lambert of Microsoft (@JohnLaTwC) tweeted about a malicious document that dropped a “very interesting .JS backdoor“. Since the end of November 2016, Kaspersky Lab has observed Turla using this new JavaScript payload and specific macro variant. This is a technique we’ve observed before with Turla’s ICEDCOFFEE payloads, detailed in a private report from June 2016 (available to customers of Kaspersky APT Intelligence Services). While the delivery method is somewhat similar to ICEDCOFFEE, the JavaScript differs greatly and appears to have been created mainly to avoid detection.

Targeting for this new malware is consistent with previous campaigns conducted by Turla, focusing on foreign ministries and other governmental organizations throughout Europe. Popularity of the malware, however, is much lower than ICEDCOFFEE, with victim organizations numbering in the single digits as of January 2017. We assess with high confidence this new JavaScript will be used more heavily in the future as a stage 1 delivery mechanism and victim profiler.

The malware is fairly simplistic but flexible in its functionality, running a standard batch of profiling commands on the victim and also allowing the actors to run arbitrary commands via Wscript.

Turla, also known as Snake / Uroburos / Venomous Bear and KRYPTON is a Russian-speaking APT group that has been active since at least 2007. Its activity can be traced to many high-profile incidents, including the 2008 attack against the US Central Command, (see Buckshot Yankee incident) or more recently, the attack against RUAG, a Swiss military contractor. The Turla group has been known as an agile, very dynamic and innovative APT, leveraging many different families of malware, satellite-based command and control servers and malware for non-Windows OSes.

Targeting Ukraine, EU-related institutions, governments of EU countries, Ministries of Foreign Affairs globally, media companies and possibly corruption related targets in Russia, the group intensified their activity in 2014, which we described in our paper Epic Turla. During 2015 and 2016 the group diversified their activities, switching from the Epic Turla waterhole framework to the Gloog Turla framework, which is still active. They also expanded their spear phishing activities with the Skipper / WhiteAtlas attacks, which leveraged new malware. Recently, the group has intensified their satellite-based C&C registrations ten-fold compared to their 2015 average. 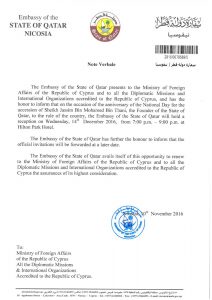 Decoy document used in the attack

The lure document above shows an official letter from the Qatar Embassy in Cyprus to the Ministry of Foreign Affairs (MoFA) in Cyprus. Based on the name of the document (National Day Reception (Dina Mersine Bosio Ambassador’s Secretary).doc, it is presumed it may have been sent from the Qatar Ambassador’s secretary to the MoFA, possibly indicating Turla already had control of at least one system within Qatar’s diplomatic network.

The document contains a malicious macro, very similar to previous macros used by Turla in the past to deliver Wipbot, Skipper, and ICEDCOFFEE. However, the macro did contain a few modifications to it, mainly the XOR routine used to decode the initial JavaScript and the use of a “marker” string to find the embedded payload in the document.

Below is a snippet of the new XOR routine used to decode the initial JavaScript payload. Turla has consistently changed the values used in this routine over the last year, presumably to avoid easy detection:

Here is a function written in Python to assist in decoding of the initial payload:

Another change in the macro is the use of a “marker” string to find the payload offset in the document. Instead of using hard coded offsets at the end of the document as in ICEDCOFFEE, the macro uses the below snippet to identify the start of the payload:

This file is then executed using Wscript.Shell.Run() with a parameter of “NPEfpRZ4aqnh1YuGwQd0”. This parameter is an RC4 key used in the next iteration of decoding detailed below.

The only function of mailform.js is to decode the third layer payload stored in the JavaScript file as a Base64 string. This string is Base64 decoded, then decrypted using RC4 with the key supplied above as a parameter (“NPEfpRZ4aqnh1YuGwQd0”). The end result is yet another JavaScript which is passed to the eval() function and executed.

The third layer payload is where the C2 beaconing and system information collection is performed. This JS will begin by copying itself to the appropriate folder location based on the version of Windows running:

Next, it will establish persistence on the victim by writing to the following registry key:

After establishing its persistence, it will then execute a series of commands on the victim system using “cmd.exe /c” and store them to a file named “~dat.tmp”, in the same folder where “mailform.js” is located:

Once the information is collected into the temporary “~dat.tmp” file, the JavaScript reads its contents into memory, RC4 encrypts it with the key “2f532d6baec3d0ec7b1f98aed4774843”, and deletes the file after a 1 second sleep, virtually eliminating storage of victim information on disk and only having an encrypted version in memory.

With the victim info stored in encrypted form in memory, the JavaScript then will perform the necessary callback(s) to the C2 servers which are hard coded in the payload. The addresses seen in this payload were as follows:

It should be noted that the above domains appear to have been compromised by the actor based on the locations of the PHP scripts. 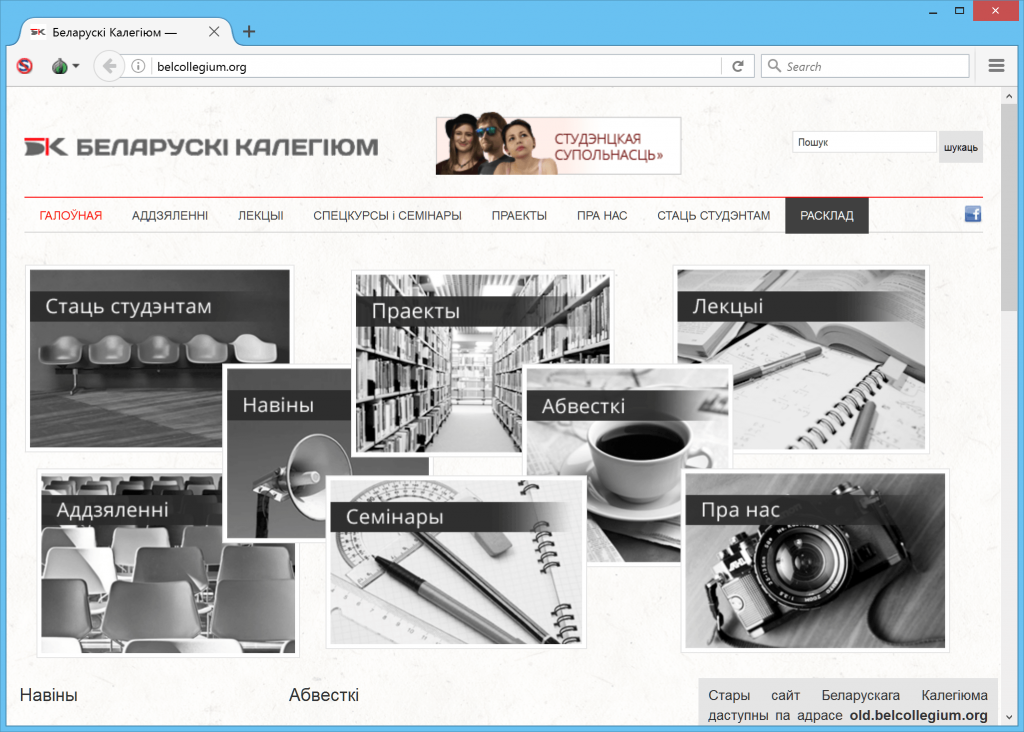 Belcollegium[.]org – a legitimate website compromised and used for C2

The POST request will contain the unique User-Agent string above as one of the headers and also the Base64 encoded version of the RC4 encrypted victim data collected earlier.

The C2 will respond in one of four ways after the POST request:

In the case of an answer of “good”, the JavaScript will then sleep for a random amount of time, ranging from 3600-3900 seconds.

The “exit” command will cause script to exit gracefully, thus shutting down the communications to the C2 server until next startup / login from the user.

The “fail” command is for uninstalling the JavaScript and its persistence. Both the “mailform.js” file and registry key created for persistence will be deleted upon receipt of this command.

The “work” command is used to task the victim’s system to run arbitrary commands via Wscript.shell.run(). It begins by checking to see if a file “mailform.pif” exists in the same directory as the JavaScript, and if so, it will delete it. The victim will then send a POST request to the C2 much in the same way as before with the beacon traffic, but with some slight differences. The User-Agent header will remain the same as in the beacon traffic, but the data sent to the C2 will consist of the 4-byte string “work”. If the response from the server after this acknowledgement is “200 OK”, then the system will proceed to read the response data into memory, RC4 encrypt it using the same key “2f532d6baec3d0ec7b1f98aed4774843”, then write it out to the “mailform.pif” file referenced above. The command file is run, the JavaScript will sleep for 30 seconds, and then the file is subsequently deleted.

One of the domains involved in this new malware (soligro[.]com) expired in July 2016 and was was available for purchase and sinkhole at the time of the analysis. Sinkhole data shows several potential victims, with one high profile victim (195.251.32.62) located within the Greek Parliament: 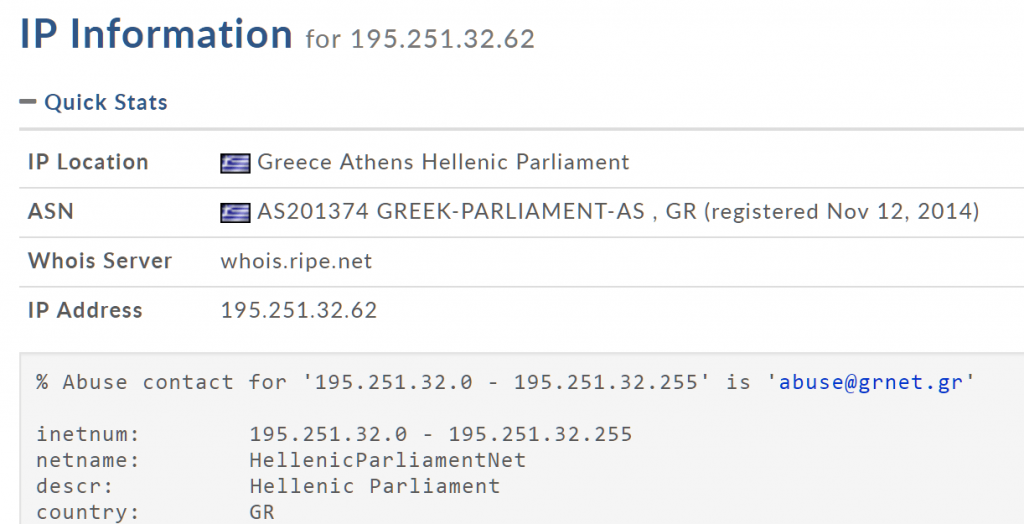 The majority of connections to the sinkhole server have been observed from IP ranges residing within Greece. This leads us to believe the main target for the specific document above was Greece, although we also have indications of targeting in Romania and Qatar based on other data.

In recent months, the Turla actors have increased their activity significantly. The addition of KopiLuwak to their already existing ICEDCOFFEE JavaScript payload indicates the group continues to evolve and deliver new tools to avoid detection by known malware signatures.

Currently, it seems the Turla actors continue to rely heavily on embedded macros in Office documents. While this may appear to be an elementary technique to use for such a sophisticated actor, they are repeatedly successful in compromising high value targets with this method. It is advised that users disable macros in their enterprise and not allow the user to enable said content unless absolutely necessary. Furthermore, using the polymorphic obfuscation technique for the macros has caused difficulties in writing signatures for detection. 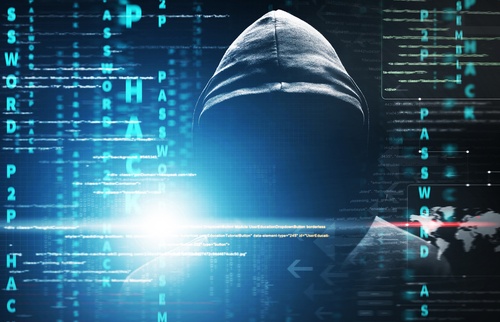