Felix FX Lindner of Recurity Labs GmbH started the day off with a close look at Huawei’s security response process and (hint: it’s not close to being adequate) and a technical dissection of the internals of the networking giant’s VRT software that powers routers and hardware around the world.

Lindner’s presentation included an introduction of the VRT architecture, the special properties of configuations and services and a hands-on demo of how to reverse engineer the operating system.

Coming on the heels of the U.S. government’s nervousness about the use of Huawei gear, Lindner’s talk was particularly timely. One thing that stood out what his statement that he was unable to pinpoint any backdoors on VRT-powered routers.

But, as Lindner explains, the combination of easy-to-find vulnerabilities and Huawei’s tenuous approach to security response means that backdoors aren’t really necessary.

The second talk I enjoyed was by Nils of MWR InfoSecurity. Nils, well-known for his Pwn2Own hacks against modern browsers and Android devices, demonstrated several hacks of Pin Pads or payment terminals that are used to accept card payments around the world. 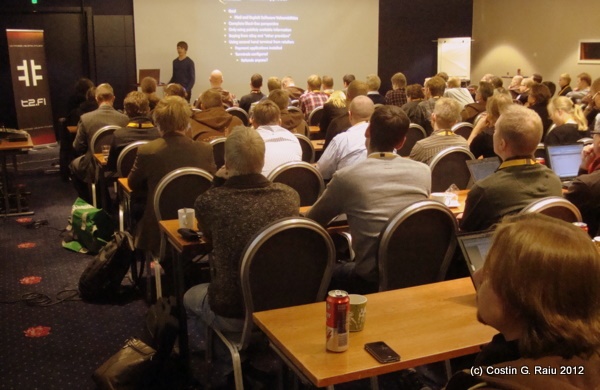 He explained that these handheld devices run payment applications on top of the device-specific firmware and showed how easy it is to launch code execution exploits against memory corruption vulnerabilities.

Tomorrow, my colleague Costin Raiu will do a keynote presentation on how the Flame nation-state malware campaign was discovered and provide a wide-angle look at the state of cyber-war operations.