This type of spam message traditionally contains adverts for fake designer goods and medication to boost the male libido. In order to grab the users’ attention, spammers are actively exploiting this particular holiday – recipients are invited to buy their nearest and dearest a replica of a Swiss watch or a pill to increase potency.

Seasonal partner programs containing adverts with the trappings of this day of romance increase their activity as 14 February approaches. In particular, partner programs offering flowers blossom at this time of year with participants getting a cut from every customer that they attract. These sorts of programs distribute the lion’s share of Valentine’s spam. 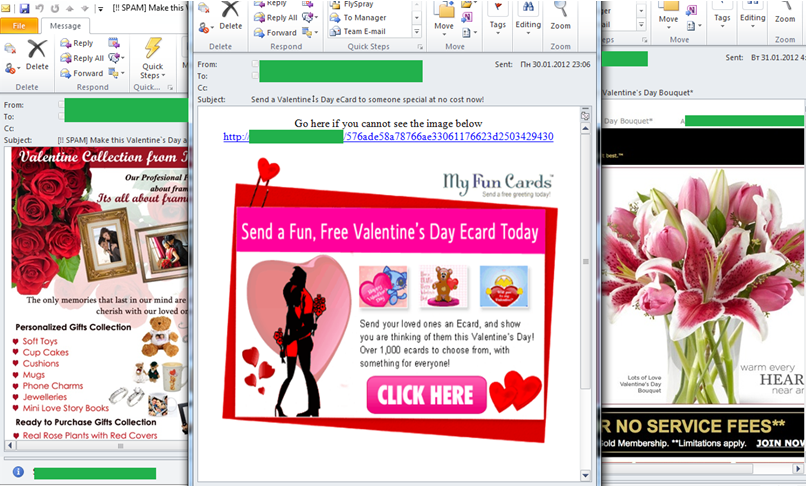 In January spam traffic included Valentine’s e-cards to be sent on the big day. Knowing such greetings cards often contain malicious code we decided to have a closer look at one of these mailings. Contrary to our expectations, the link did not lead to a malicious program, but there was no e-card there either. More details about the results of our research are available in our blog.

In 2011, fraudsters distributed malware masked as e-cards less frequently than usual. However, users should not completely discount this risk, especially on a major date in the calendar. Spammer tricks do not disappear – they leave the stage and then come back again.

The year 2012 promises to be packed with political events of international importance. In March Russia will elect its president. In April-May presidential elections will be held in France and finally in November US citizens will vote for their new president.

Previous years, especially 2011, demonstrated that political activity in various forms is familiar territory for spammers. In January 2012 it became evident that the amount of political spam in the coming year would not decrease.

Radical emails calling for revolution in Russia continued to appear on the RuNet in January. No “constructive” mass mailings from the supporters of this or that political faction were registered in January, although we expect to see them in February, the final month of presidential campaigning.

US spammers are also actively demonstrating their political stance even though the elections are almost a year away. Spam traffic often includes emails containing a “shocking video” of Barack Obama or “awful facts” about the current president. Additionally, American spammers have been distributing messages canvassing for other potential candidates in order to “end the Obama era”.

Sporting themes have also become “newsworthy” for the fraudsters. The 2012 Olympic Games is the bait exploited by “Nigerian” spammers to distribute emails containing fake notifications of Olympic lottery wins. Advanced Internet users have no difficulty in recognizing them as fraudulent messages, but less experienced users can easily fall victim to such scams. 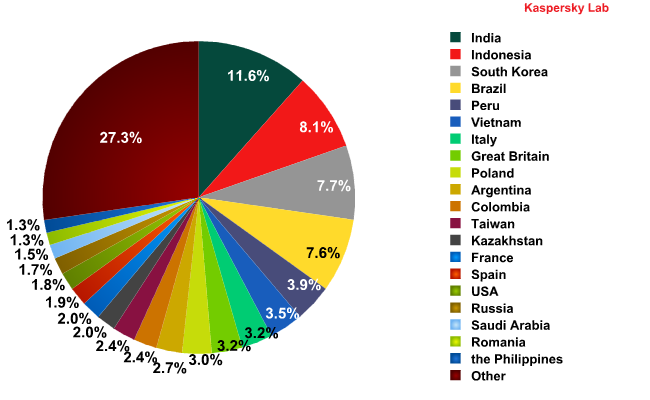 In January the UK re-entered the list of ten most popular sources of spam, pushing Colombia off the list and taking 8th place. In December the UK had dropped out of the top 10, possibly because the holiday season saw many botnet computers switched off. The rest of the rating remained unchanged from December, although some entries swapped places.

India maintained its leadership having distributed 11.5% of the total quantity of spam (-1 percentage point). Indonesia’s share decreased compared to December’s figure by almost 3 percentage points which, however, could not prevent it from taking 2nd place in the rating. Indonesia was followed by South Korea (+1.6 percentage points).

Brazil and Peru came 4th and 5th. The amount of spam originating from these two countries decreased by 2.1 and 2.5 percentage points respectively.

As in December, 6th position in January was occupied by Vietnam, whose contribution to world spam dropped by 0.25 percentage points.

Thus, the first six places in the rating of the most popular spam sources were occupied by Asian and Latin American countries.

Malicious files were found in 4.3% of all emails in January, an increase of 0.3 percentage points compared with the previous month. 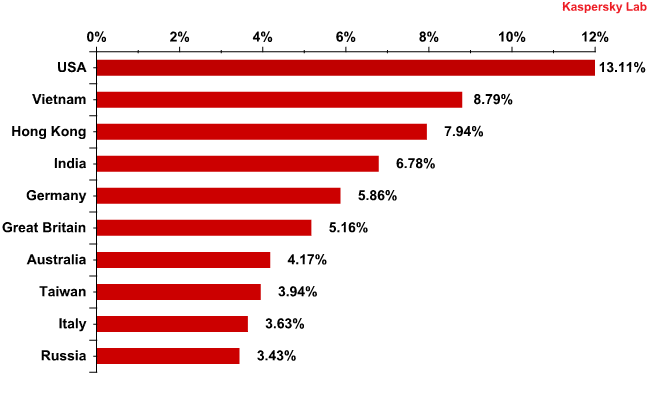 Countries where mail antivirus detected malware most frequently in January 2012

This fall was not caused by the holiday season. On the contrary, at the beginning of January the percentage of antivirus detections on the Russian segment of the internet was 3-4 times higher than in the second half of the month.

Among other significant shifts in the rating, Germany’s figure is worthy of special mention – the share of antivirus detections in this country doubled compared to the previous month.

The share of the other Top 10 members fluctuated within a range of 1.5 percentage points. 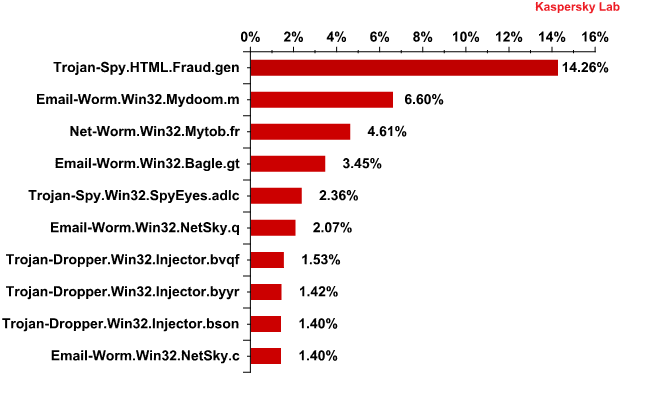 Trojan-Spy.HTML.Fraud.gen again topped the list of the 10 most popular malicious programs distributed via email in January: over 14% of all antivirus detections fell on this long-term leader of the rating, an increase of 3 percentage points compared with December’s figure.

Trojan-Spy.HTML.Fraud.gen uses spoofing technology and appears in the form of an HTML page. It comes with a phishing email containing a link to a fake site resembling that of a well-known bank or e-pay system where the user is asked to enter a login and a password. 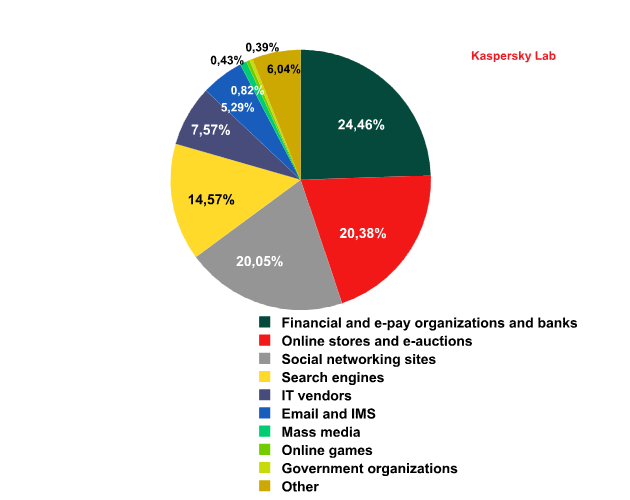 Top 100 organizations, by sphere of activity, targeted by phishers in January 2012 (based on anti-phishing component detections)

This year sees the start of Kaspersky Lab’s new listing of the top 100 organizations targeted by phishers, grouped by category. The rating is based on our anti-phishing component detections activated every time a user attempts to click on a phishing link, regardless of whether the link is in a spam email or on a web page.

The Top 100 organizations targeted by phishers can be broken down into nine categories:

The “Other” category includes mobile operators, Internet providers and some other organizations. In most cases the accounts of the users on these sites also contain financial information. 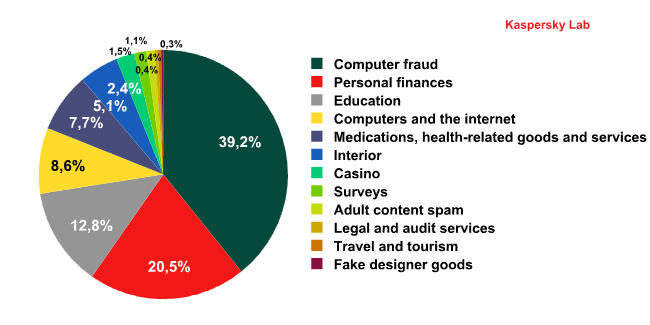 The top two categories in English-language spam have not changed compared to December. Fraudulent emails remained on top despite a slight drop (-1.6 percentage points) in its share while the percentage in the Personal Finance category grew slightly (+3.3 percentage points).

The amount of spam messages in the Education category doubled. In January spammers were especially persistent in inviting users to get a degree in graphic design.

The share of the Computers and the Internet category increased fourfold in January. More than half of all spam messages registered by Kaspersky Lab offered cartridges for photocopying machines.

In practice, the “Valentine” mass mailings are not as numerous as those spread in the run-up to Christmas and the New Year. In the second week of 2011, the peak of their distribution, Valentine spam accounted for just 0.21% of the total quantity of spam and there is no reason to expect any considerable growth this year. However, emails exploiting the Valentine theme will no doubt be evident in the first half of February.

To recap, one of the traditional types of spam at this time of year is malicious messages imitating Valentine’s Day cards. Over the last few years this type of spam has not been encountered frequently in spam flows, but the risk should not be ignored. Users should be particularly vigilant with all emails received in this period. It is especially dangerous to open an .exe link because it may well contain malicious code instead of a declaration of love.

It is worth noting that the amount of spam with malicious attachments is not declining and has maintained its rather high level – 4.3%. Additionally, the Computer Fraud category tops the rating of the most popular spam categories. These two factors combine to make English-language spam very dangerous for users.