Apple fans are eagerly awaiting the arrival of iPhone 5 which is due out today. Each unveiling of an iDevice is accompanied by a global buzz of excitement which usually attracts the attention of spammers: every new iPad or iPhone inevitably becomes the bait in numerous fake lotteries and other fraudulent emails.

However, customers are not only interested in Apple’s devices but also their accessories. This year’s first registered mass mailing dedicated to the new iPhone came from a Chinese company that has decided to fill this niche.

The advertiser, having first apologized for any inconvenience that may be caused by the email, offers users the chance to buy a case for the new iPhone 5 which has not even been officially presented. 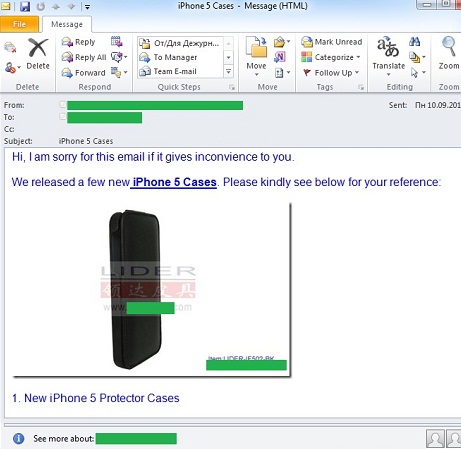 Considering the sort of promises that usually appear in spam, one can only wonder why the sender didn’t offer an actual iPhone 5 or, better still, an iPhone 6 (or whatever it’ll be called in 2013? iPhone 5v?).

Spam one step ahead of iPhone 5 release