These days, spam has become a part of our everyday lives, even if we wish that it wasn’t, and like many other things, it is indicative of what is happening to the global economy. It may not be readily obvious that this thesis is correct just by opening your inbox and finding lots of unwanted messages of course. However, when looked at as a whole it is clear that the themes and development trends of spam closely correlate to the global financial situation.

In order to understand this correlation and to accept it, it is first of all necessary to answer the question “What is spam?” There is a widely accepted and precise definition – spam is anonymous, unsolicited bulk email. However, from the recipients’ point of view, it is merely unwanted detritus that chokes up their inboxes.

For spammers of course, these anonymous, unsolicited bulk emails constitute their everyday business, and like any other form of enterprise, spam has its own business rules that regulate the relationship that exists between the spammer and their client. The spam business generally operates in one of two ways: either in the form of an affiliate program, or through the more standard ‘service provider/client’ relationship.

An affiliate or partnership program means that the distributor of the goods pays the spammers not for the advertisement itself, but for each client who purchases goods from them. In some cases a partnership program may be launched by the distributors themselves, however, most often it is a third party that brings together the company offering the goods and the spammers who are ready to advertise them. In this case it’s the spammer and the organizer of the scheme that take a cut from the seller of the goods.

The percentage of partnership program-type spam on the Russian Internet constantly fluctuates, yet rarely falls below a level of 30-60% of the total amount of spam.

The service provider/client relationship is the simplest method. The service provider is the spammer that offers their services. The client is the person or a company that use these services to advertise their goods. This scheme is as popular on the Russian Internet as the partnership program is.

This article began with a bold statement saying that spam is an indicator of the global economy. To go one step further – studying spam makes it possible to monitor developments in the global economic situation. Of course, it does not entail any serious economic analysis, but the general trends of the economic downturn and upturn were clearly visible. It was just necessary to know where to look.

Crisis symptoms were most evident in spam distributed under the service provider/client scheme, because the majority of clients were small and middle-sized businesses, the area most affected by the crisis. Below is a graph which illustrates the changes in the quantity of ordered spam. 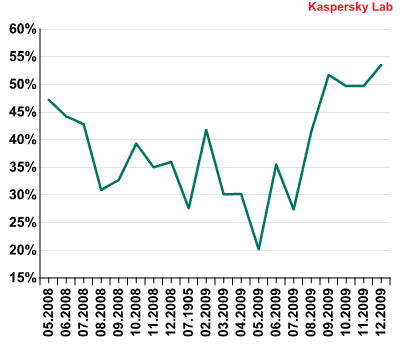 The first decline is in August 2008, the month considered to be the beginning of the economic crisis in Russia. Between August and October the amount of spam orders increased slightly, but then declined without ever reaching the pre-crisis level. The second serious decline – the bottom of the crisis – falls during the spring of 2009. These declines happened for two reasons: the spammers’ clients did not have enough money to advertise, and many small and medium-sized companies which had used spam as an advertising tool failed to survive the difficult economic situation.

Only one spam sector bucked the trend – real estate. 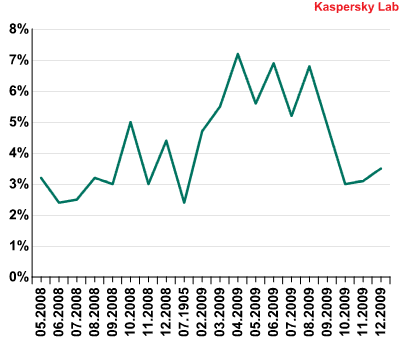 The amount of this type of spam on the Russian Internet is usually insignificant because the majority of real estate agencies are large companies that do not use spammer services. However, during this period office space was leased by small companies, thereby pushing up advertising activity during the crisis. This is quite logical. Many bankrupt companies had to leave their offices. Those organizations which could survive were looking for less expensive office space. This situation forced landlords to reduce their prices and to launch advertising campaigns that included spamming. The first burst of activity of this type was seen in October 2008. It reached its peak in the spring of 2009.

We have already mentioned that spam involves two parties – a service provider and a client. Though spammers represent the shadow economy, their “companies” are usually small and medium-sized businesses, meaning that they were also hit by the crisis. A lack of clients made spammers advertise their own services. Of course, this type of spam is not new, but it has never been as aggressive as it was during the crisis. Additionally, in trying to rustle up new business, the spammers sent out messages telling potential clients that advertising via bulk email was perfect for small companies and that their activity was entirely legitimate. 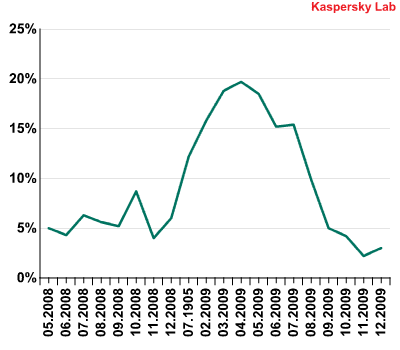 As can be seen from the graph, spammers first saw their business drop away during November 2008. Consequently, in January 2009 the percentage of this type of spam started to grow, reaching a peak in March 2009. 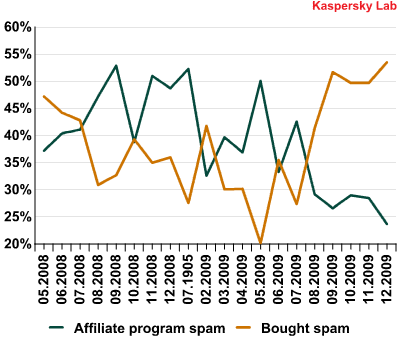 Correlation between the quantity of spam
ordered and ‘partnership program’ spam

The question therefore arises: why don’t spammers forget about individual clients and deal only with partnership programs? The answer is very simple. We are studying spam on the Russian Internet and the majority of Russian users do not buy goods advertised via partnership programs. That is why Russian spammers prefer to deal with real customers who pay real money rather than wait for that one-per-million email recipient to buy a pack of Viagra.

In June 2009 the situation in the spam industry changed for the better; however, it was too early to speak about any serious trends. During August these trends became more prolific. The spammers’ clients began returning and the amount of spam ordered by individual clients began to grow rapidly. In September it exceeded its regular figure of 50%, whilst the quantity of partnership program spam started to decrease.

The amount of spam advertising the spammers’ own services also declined because it was no longer necessary.

The percentage of real estate spam returned to its pre-crisis figures, which was a good indication of economic recovery, with landlords not needing to use spam as an advertising tool in order to find tenants. 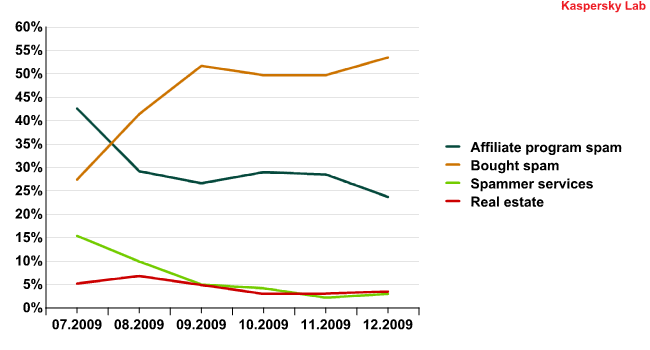 Spam by category in the second half of 2009

In conclusion, the noticeable stabilization of the spam industry is indicative of the general stabilization of small and medium-sized businesses in Russia. This means that spammers once again have clients willing to pay for their services, whilst the reappearance of real estate spam suggests that small and medium-sized businesses, the most vulnerable during the economic crisis, are recovering steadily.

Spam – How it Mirrors the Global Economy