Which web resources most often attract cybercriminals? It’s always those where they can reach the greatest number of users and deliver the maximum possible profits. Today, practically all internet users have an account with a social network (and often several with different networks), which makes these sites very popular with cybercriminals. Facebook is the most attractive social network: according to Kaspersky Lab’s statistics, fake sites imitating Facebook accounted for nearly 22% of all instances when the heuristic Anti-phishing component was triggered.

On the face of it, hijacking social network accounts shouldn’t be that attractive for cybercriminals, as it doesn’t bring an immediate profit – we don’t keep our savings with Facebook, while the personal information placed on these networks is only interesting to our friends and loved ones. But that first impression may be misleading. In reality, there may be several reasons for cybercriminals to want illegitimate access to the accounts in Facebook or any other social network:

Hijackers most often use the last option on this list, making money by selling stolen data.

According to data from Kaspersky Security Network in 2013, phishing sites imitating social network websites were to blame for more than 35% of cases when the Anti-phishing heuristic component was triggered. In total, we recorded over 600 million attempts by our users to access phishing sites. Sites imitating Facebook accounted for 22% of all phishing incidents.

The heuristic component of the Anti-phishing system is triggered when the user follows a link leading to a phishing page that has not previously been recorded in the Kaspersky Lab databases. It doesn’t matter how that link is followed: by clicking on a link provided in a phishing message, in a social network message or, say, as a result of some malware activity. When the heuristic component is triggered, the user sees a warning message about a possible threat. 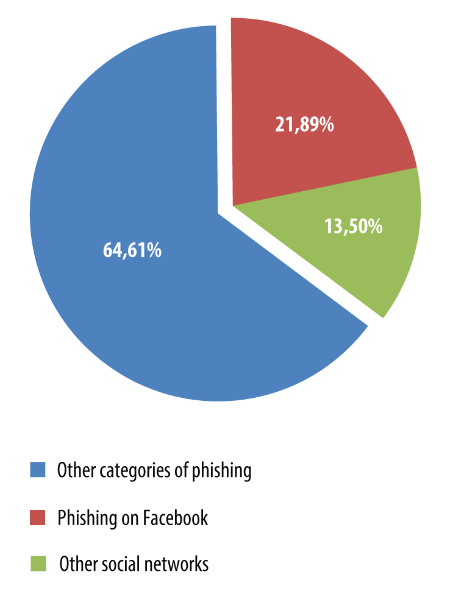 In 2013, fake Facebook pages accounted for 21.89% of all instances when the Anti-phishing heuristic component was triggered

In early 2014, the situation has changed somewhat: Yahoo took the lead for heuristic anti-phishing incidents. However, Facebook is still a top target for phishers: in Q1 2014, fake Facebook pages accounted for 10.85% of all instances when the Anti-phishing heuristic component was triggered. 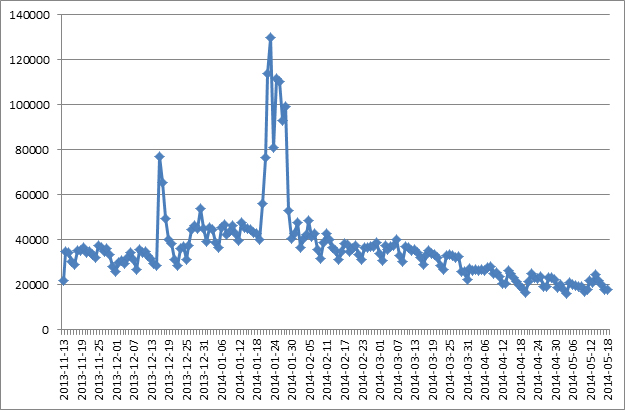 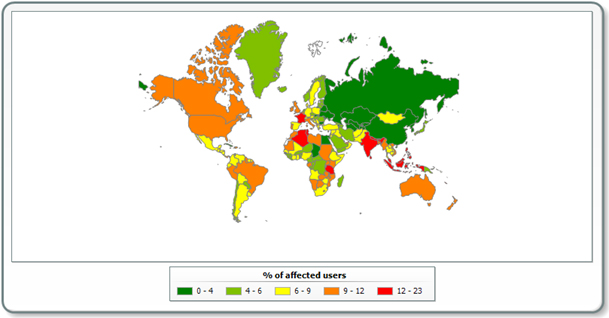 How do users land on fake webpages? Cybercriminals have created a number of ways to entice their victims to pages with phishing content. They typically use one of the following to send links to phishing webpages:

Users can also land on phishing pages if the computer or router was infected with malware that could, for instance, modify or replace the ‘hosts’ file, spoof the DNS or replace the content. This kind of malware is especially dangerous as they redirect users to phishing pages when they follow legitimate links to organizations whose sites are undergoing phishing attacks.

However, the correct URL address and the availability of a secure connection cannot always guarantee that you have not stumbled onto a fraudulent page. If in doubt, check that the certificate belongs to Facebook. Also, always pay attention to any notifications from the security software installed on your computer.

Sending email messages is a popular method for cybercriminals to send links to phishing pages. These messages are often impersonal, i.e. contain no direct addresses to a specific person, and typically imitate a Facebook message notifying that a personal message has arrived, or that the user’s friends have registered in this social network. If users click on the link, they land on a phishing site prompting them to enter their credentials. Those credentials are immediately sent to the cybercriminals, and users are redirected to the real Facebook login page.

Cybercriminals often resort to intimidation, sending fake messages that threaten to block users’ accounts. To avoid that, users are instructed to follow a link provided in the message and enter their login credentials on the webpage. This approach relies on shocking the victim into carelessness.

Below is an example of a fake Facebook message notifying a user of recent activities that s/he may have missed. If you position the cursor on the link, the popup window shows that it leads to an unknown address which is different from the official Facebook address. Interestingly, the cybercriminals use part of the recipient’s email address to address the user. 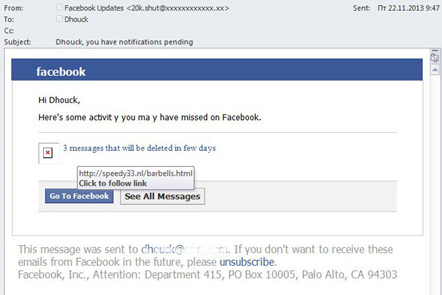 Here is another example of a fake message – this time in Portuguese. The recipient is warned that the account may be blocked soon. To avoid this, the user is advised to follow a link that supposedly leads to Facebook, and enter his/her credentials there. However, placing the cursor over the link shows that it leads to an unrelated site and not to Facebook. 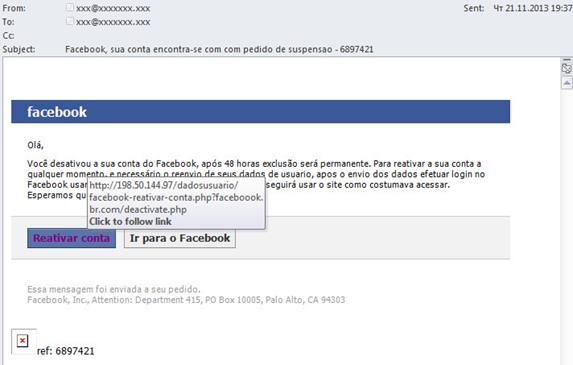 Often phishing messages are sent within the social network from compromised accounts registered by the friends of the potential victim. They typically imitate short personal messages and contain a question like “Is that you in this photo?” and a link to the “photo”. When users follow the link provided, they land on a fake Facebook login page that contains the standard message “Log in to continue”. If users don’t become suspicious and enter their credentials, their data will immediately be dispatched to cybercriminals.

All over the globe

Several examples of fake Facebook pages are given below. Pay attention to the address bar: cybercriminals often use words resembling “Facebook” in the URL address of the phishing page, trying to disorient inexperienced Internet users. At times, the URL does not have anything in common with the Facebook address even though the page design mimics that of genuine Facebook pages. Also, notice that no secure connection is available at these pages, which is a sure sign that that is a phishing resource. 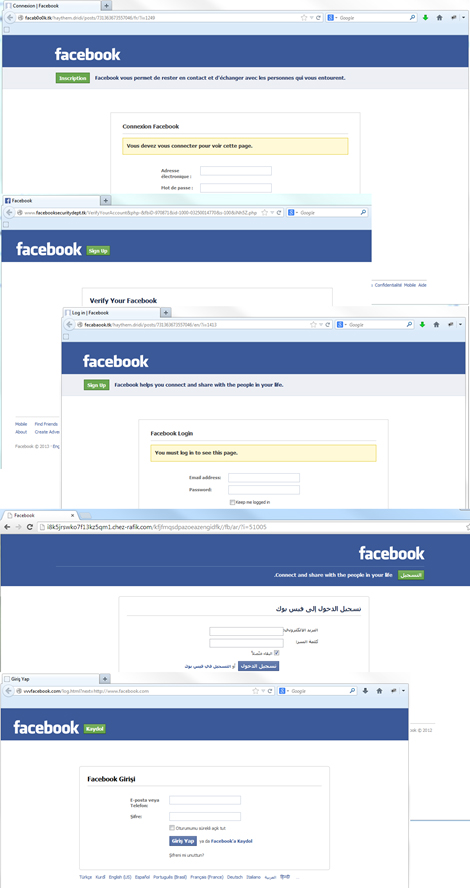 As can be seen in the examples, the phishing sites are designed to imitate Facebook’s login or registration page. The cybercriminals’ aim is obviously to collect personal data with which to gain access to accounts for further malicious actions.

Smartphone or tablet owners who visit social networks from their mobile devices are also in danger of losing their personal data. Cybercriminals create dedicated web pages for mobile browsers that imitate the Facebook app login procedure. 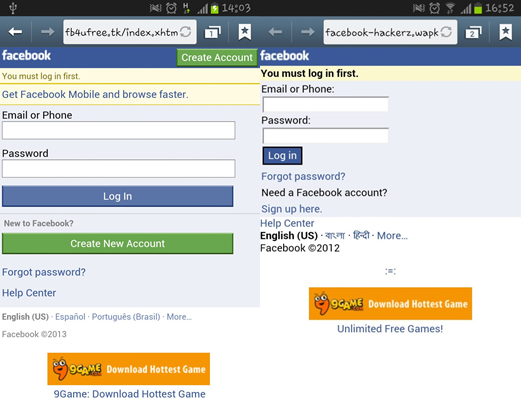 Some mobile browsers hide the address bar while opening the page, which plays into the cybercriminals’ hands. This makes it much more difficult for the user to detect the falsification. 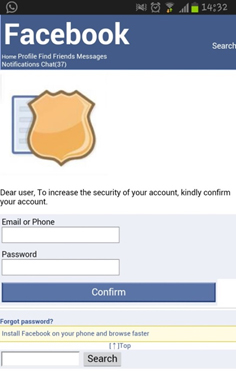 A phishing webpage with a hidden address bar

Malware programs which steal the owner’s personal data may also be active on mobile devices. This stolen information can include social network account credentials. As well as general purpose spyware, there are specialized mobile spyware programs specifically targeting social networks. For instance, a mobile Trojan can spoof the official Facebook application when the user launches it, so a phishing application will open. Also, there is a risk that the user may download a phishing application imitating the official Facebook mobile application.

When cybercriminals spy on social network accounts the main weapon is the carelessness of account holders and their lack of vigilance. Here are our recommendations: