Also known as Inception, Cloud Atlas is an actor that has a long history of cyber-espionage operations targeting industries and governmental entities. We first reported Cloud Atlas in 2014 and we’ve been following its activities ever since.

From the beginning of 2019 until July, we have been able to identify different spear-phishing campaigns related to this threat actor mostly focused on Russia, Central Asia and regions of Ukraine with ongoing military conflicts.

Cloud Atlas hasn’t changed its TTPs (Tactic Tools and Procedures) since 2018 and is still relying on its effective existing tactics and malware in order to compromise high value targets.

The Windows branch of the Cloud Atlas intrusion set still uses spear-phishing emails to target high profile victims. These emails are crafted with Office documents that use malicious remote templates – allowlisted per victims – hosted on remote servers. We described one of the techniques used by Cloud Atlas in 2017 and our colleagues at Palo Alto Networks also wrote about it in November 2018.

Previously, Cloud Atlas dropped its “validator” implant named “PowerShower” directly, after exploiting the Microsoft Equation vulnerability (CVE-2017-11882) mixed with CVE-2018-0802. During recent months, we have seen a new infection chain, involving a polymorphic HTA, a new and polymorphic VBS implant aimed at executing PowerShower, and the Cloud Atlas second stage modular backdoor that we disclosed five years ago in our first blogpost about them and which remains unchanged.

PowerShower, named and previously disclosed by Palo Alto Networks in their blogspot (see above), is a malicious piece of PowerShell designed to receive PowerShell and VBS modules to execute on the local computer. This malware has been used since October 2018 by Cloud Atlas as a validator and now as a second stage. The differences in the two versions reside mostly in anti-forensics features for the validator version of PowerShower.

The PowerShower backdoor – even in its later developments – takes three commands:

A few modules deployed by PowerShower have been seen in the wild, such as:

We haven’t yet seen a VBS module dropped by this implant, but we think that one of the VBS scripts dropped by PowerShower is a dropper of the group’s second stage backdoor documented in our article back in 2014.

And his new friend, VBShower

During its recent campaigns, Cloud Atlas used a new “polymorphic” infection chain relying no more on PowerShower directly after infection, but executing a polymorphic HTA hosted on a remote server, which is used to drop three different files on the local system.

This “polymorphic” infection chain allows the attacker to try to prevent IoC-based defence, as each code is unique by victim so it can’t be searched via file hash on the host. 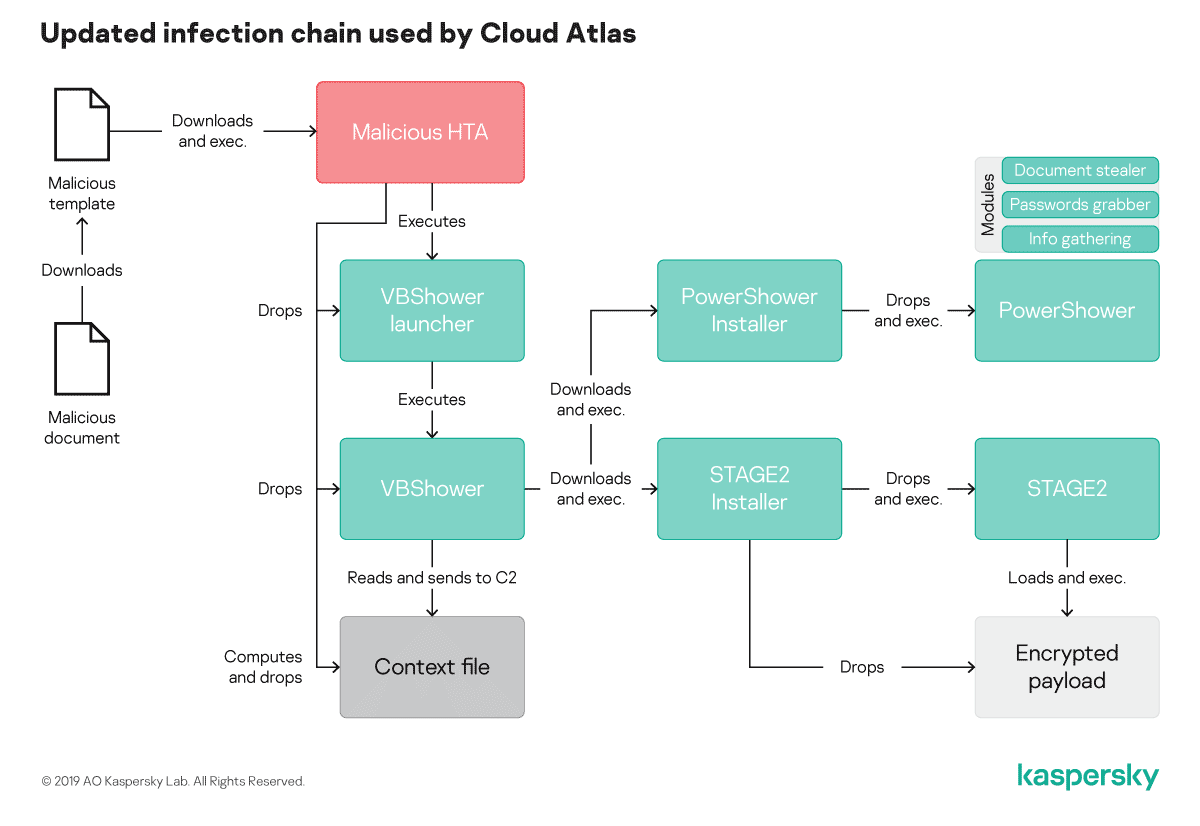 Once these files have been deleted and its persistence is achieved in the registry, VBShower sends the context file computed by the HTA to the remote server and tries to get via HTTP a VBS script to execute from the remote server every hour.

Cloud Atlas remains very prolific in Eastern Europe and Central Asia. The actor’s massive spear-phishing campaigns continue to use its simple but effective methods in order to compromise its targets.

Unlike many other intrusion sets, Cloud Atlas hasn’t chosen to use open source implants during its recent campaigns, in order to be less discriminating. More interestingly, this intrusion set hasn’t changed its modular backdoor, even five years after its discovery.

Some emails used by the attackers