Two years ago, we published our research into RedOctober, a complex cyber-espionage operation targeting diplomatic embassies worldwide. We named it RedOctober because we started this investigation in October 2012, an unusually hot month.

After our announcement in January 2013, the RedOctober operation was promptly shut down and the network of C&Cs was dismantled. As usually happens with these big operations, considering the huge investment and number of resources behind it, they don’t just “go away” forever. Normally, the group goes underground for a few months, redesigns the tools and the malware and resume operations.

Since January 2013, we’ve been on the lookout for a possible RedOctober comeback. One possible hit was triggered when we observed Mevade, an unusual piece of malware that appeared late in 2013. The Mevade C&C name styles as well as some other technical similarities indicated a connection to RedOctober, but the link was weak. It wasn’t until August 2014 that we observed something which made us wonder if RedOctober is back for good.

In August 2014, some of our users observed targeted attacks with a variation of CVE-2012-0158 and an unusual set of malware. We did a quick analysis of the malware and it immediately stood out because of certain unusual things that are not very common in the APT world.

Some of the filenames used in the attacks included:

At least one of them immediately reminded us of RedOctober, which used a very similarly named  spearphish: “Diplomatic Car for Sale.doc”. As we started digging into the operation, more details emerged which supported this theory.

Perhaps the most unusual fact was that the Microsoft Office exploit didn’t directly write a Windows PE backdoor on disk. Instead, it writes an encrypted Visual Basic Script and runs it. 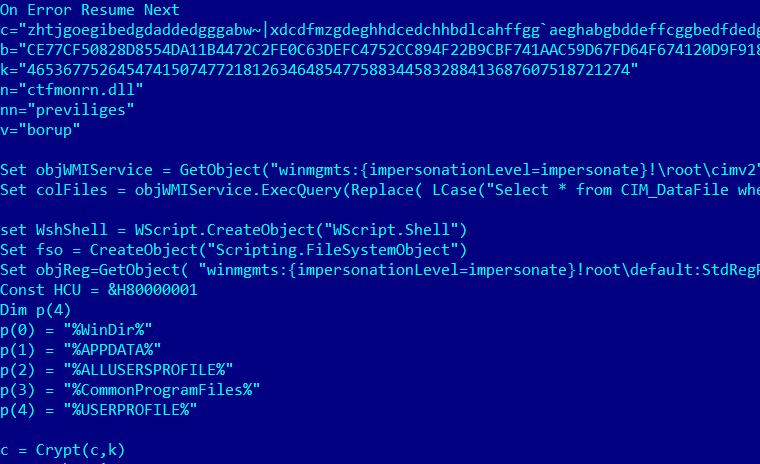 This VBScript drops a pair of files on disk – a loader and an encrypted payload. The loader appears to be different every time and internal strings indicate it is “polymorphically” generated. The payload is always encrypted with a unique key, making it impossible to decrypt unless the DLL is available.

HKEY_CURRENT_USER\Software\Microsoft\Windows\CurrentVersion\Run\ setting the key “bookstore” to the value “regsvr32 %path%\ctfmonrn.dll /s”, which ensures the malware runs every time at system boot.

Some of the DLL names we observed include:

Some of the payload names include:

The payload includes an encrypted configuration block which contains information about the C&C sever: 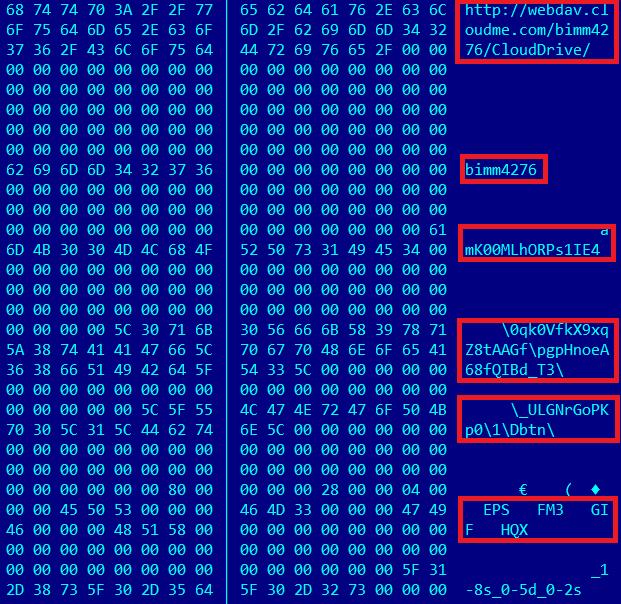 The information from the config includes a WebDAV URL which is used for connections, a username and password, two folders on the WebDAV server used to store plugins/modules for the malware and where data from the victim should be uploaded.

The Cloud Atlas implants utilize a rather unusual C&C mechanism. All the malware samples we’ve seen communicate via HTTPS and WebDav with the same server “cloudme.com”, a cloud services provider. According to their website, CloudMe is owned and operated by CloudMe AB, a company based in Linköping, Sweden.

(Important note: we do not believe that CloudMe is in any way related to the Cloud Atlas group – the attackers simply create free accounts on this provider and abuse them for command-and-control).

Each malware set we have observed so far communicates with a different CloudMe account though. The attackers upload data to the account, which is downloaded by the implant, decrypted and interpreted. In turn, the malware uploads the replies back to the server via the same mechanism. Of course, it should be possible to reconfigure the malware to use any Cloud-based storage service that supports WebDAV.

Here’s a look at one such account from CloudMe: 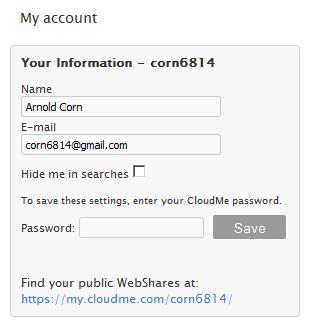 The files stored in the randomly named folder were uploaded by the malware and contain various things, such as system information, running processes and current username. The data is compressed with LZMA and encrypted with AES, however, the keys are stored in the malware body which makes it possible to decrypt the information from the C&C.

We previously observed only one other group using a similar method – ItaDuke – that connected to accounts on the cloud provider mydrive.ch.

Just like with RedOctober, the top target of Cloud Atlas is Russia, followed closely by Kazakhstan, according to data from the Kaspersky Security Network (KSN). Actually, we see an obvious overlap of targets between the two, with subtle differences which closely account for the geopolitical changes in the region that happened during the last two years.

Interestingly, some of the spear-phishing documents between Cloud Atlas and RedOctober seem to exploit the same theme and were used to target the same entity at different times.

Both Cloud Atlas and RedOctober malware implants rely on a similar construct, with a loader and the final payload that is stored encrypted and compressed in an external file. There are some important differences though, especially in the encryption algorithms used – RC4 in RedOctober vs AES in Cloud Atlas.

The usage of the compression algorithms in Cloud Altas and RedOctober is another interesting similarity. Both malicious programs share the code for LZMA compression algorithm. In CloudAtlas it is used to compress the logs and to decompress the decrypted payload from the C&C servers, while in Red October the “scheduler” plugin uses it to decompress executable payloads from the C&C.

It turns out that the implementation of the algorithm is identical in both malicious modules, however the way it is invoked is a bit different, with additional input integrity checks added to the CloudAtlas version.

Another interesting similarity between the malware families is the configuration of the build system used to compile the binaries. Every binary created using the Microsoft Visual Studio toolchain has a special header that contains information about the number of input object files and version information of the compilers used to create them, the “Rich” header called so by the magic string that is used to identify it in the file.

We have been able to identify several RedOctober binaries that have “Rich” headers describing exactly the same layout of VC 2010 + VC 2008 object files. Although this doesn’t necessarily mean that the binaries were created on the same development computer, they were definitely compiled using the same version of the Microsoft Visual Studio up to the build number version and using similar project configuration.

To summarize the similarities between the two:

Finally, perhaps the strongest connection comes from targeting. Based on observations from KSN, some of the victims of RedOctober are also being targeted by CloudAtlas. In at least one case, the victim’s computer was attacked only twice in the last two years, with only two malicious programs – RedOctober and Cloud Atlas.

These and other details make us believe that CloudAtlas represents a rebirth of the RedOctober attacks.

Following big announcements and public exposures of targeted attack operations, APT groups behave in a predictable manner. Most Chinese-speaking attackers simply relocate C&C servers to a different place, recompile the malware and carry on as if nothing happened.

Other groups that are more nervous about exposure go in a hibernation mode for months or years. Some may never return using the same tools and techniques.

However, when a major cyber-espionage operation is exposed, the attackers are unlikely to completely shut down everything. They simply go offline for some time, completely reshuffle their tools and return with rejuvenated forces.

We believe this is also the case of RedOctober, which makes a classy return with Cloud Atlas.

Kaspersky products detect the malware from the Cloud Atlas toolset with the following verdicts:

Cloud Atlas: RedOctober APT is back in style