Back in April we detected a program for smartphones running Symbian S60 2nd edition (not-a-virus:Porn-Dialer.SymbOS.Pornidal.a) which calls premium-pay numbers to get access to pornographic material.

Today we added detection for a new variant of the program – not-a-virus.Porn-Dialer.SymbOS.Pornidal.c. Just like its predecessor, this application can be harmful for two reasons:

This new variant doesn’t really differ that much from the previous one – it’s also got a EULA – except that it works on devices running Symbian S60 3rd edition and has a digital signature. 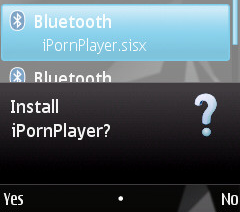 Once the install file (iPornPlayer.sisx) has been run, there’s a message about conditions of use: 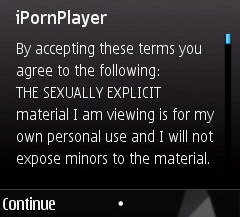 Agree to these, and more files get installed:

Although the numbers which the program calls are different from the numbers in April’s app, they’re still in pretty much the same countries: