Earlier this year, we deployed new technologies in Kaspersky Lab products to identify and block zero-day attacks. This technology already proved its effectiveness earlier this year, when it caught an Adobe Flash zero day exploit (CVE-2016-1010). Earlier this month, our technology caught another zero-day Adobe Flash Player exploit deployed in targeted attacks. We believe the attacks are launched by an APT Group we track under the codename “ScarCruft”.

ScarCruft is a relatively new APT group; victims have been observed in Russia, Nepal, South Korea, China, India, Kuwait and Romania. The group has several ongoing operations, utilizing multiple exploits — two for Adobe Flash and one for Microsoft Internet Explorer.

Operation Daybreak appears to have been launched by ScarCruft in March 2016 and employs a previously unknown (0-day) Adobe Flash Player exploit. It is also possible that the group deployed another zero day exploit, CVE-2016-0147, which was patched in April.

This exploit caught by our technologies highlights a few very interesting evasion methods, some of which we haven’t seen before. We describe them below.

Operation Daybreak appears to have been launched by unknown attackers to infect high profile targets through spear-phishing e-mails. To date, we have observed more than two dozen victims for these attacks.

Although the exact attack vector remains unknown, the targets appear to receive a malicious link which points to a hacked website where the exploitation kit is hosted. The hacked web server hosting the exploit kit is associated with the ScarCruft APT and used in another line of attacks. Certain details, such as using the same infrastructure and targeting, make us believe that Operation Daybreak is being done by the ScarCruft APT group.

The ScarCruft APT group is a relatively new player and managed to stay under the radar for some time. In general, their work is very professional and focused. Their tools and techniques are well above the average. Prior to the discovery of Operation Daybreak, we observed the ScarCruft APT launching a series of attacks in Operation Erebus. Operation Erebus leverages another Flash Player exploit (CVE-2016-4117) through the use of watering hole attacks.

In the case of Operation Daybreak, the hacked website hosting the exploit kit performs a couple of browser checks before redirecting the visitor to a server controlled by the attackers hosted in Poland.

The main exploit page script contains a BASE64 decoder, as well as rc4 decryption implemented in JS.

The exploitation process consists of three Flash objects. The Flash object that triggers the vulnerability in Adobe Flash Player is located in second SWF delivered to the victim.

At the end of the exploitation chain, the server sends a legitimate PDF file to user – “china.pdf”. The “china.pdf” file shown to the victims in the last stage of the attack seems to be written in Korean: 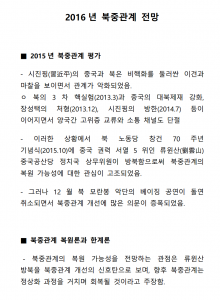 The document text talks about disagreements between China and “The North” over nuclear programs and demilitarization.

The vulnerability (CVE-2016-4171) is located in the code which parses the ExecPolicy metadata information.

This structure also contains an array of item_info structures:

The documentation says the following about these structures:

“The item_info entry consists of item_count elements that are interpreted as key/value pairs of indices into the string table of the constant pool. If the value of key is zero, this is a keyless entry and only carries a value.”

In the exploit used by the ScarCruft group, we have the following item_info structures: 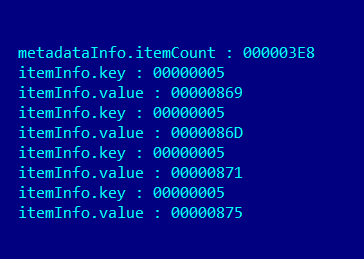 The code that triggers the vulnerability parses this structure and, for every key and value members, tries to get the respective string object from string constant pool. The problem relies on the fact that the “.key” and “.value” members are used as indexes without any kind of boundary checks. It is easy to understand that if key or value members are larger than string constant pool array, a memory corruption problem appears. It is also important to mention that this member’s (value, key) are directly read from SWF object, so an attacker can easily use them to implement arbitrary read/write operations. 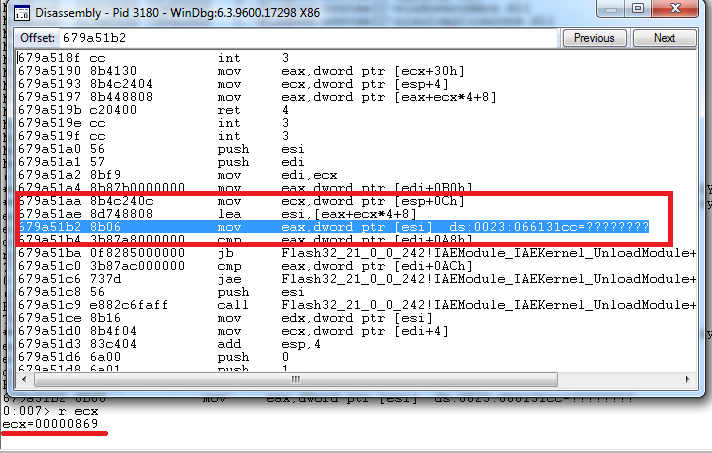 Getting object by index from constant pool without any checks

Using this vulnerability, the exploit implements a series of writes at specified addresses to achieve full remote code execution.

The Operation Daybreak attack employs multiple stages, which are all outstanding in some way. One of them attracted our attention because it implements a bypass for security solutions we have never seen before.

In the first stage of the attack, the decrypted shellcode executed by the exploit downloads and executes a special DLL file. This is internally called “yay_release.dll”:

The code of this module is loaded directly into the exploited application and has several methods of payload execution. One of method uses a very interesting technique of payload execution which is designed mostly to bypass modern anti-malware products. This uses an interesting bug in the Windows DDE component. It is not a secret that anti-malware systems trigger on special system functions that are called in the context of potential vulnerable applications to make a deeper analysis of API calls such as CreateProcess, WinExec or ShellExecute.

For instance, such defense technologies trigger if a potentially vulnerable application such as Adobe Flash starts other untrusted applications, scripts interpreters or even the command console.

To make execution of payload invisible for these defense systems, the threat actors used the Windows DDE interface in a very clever way. First, they register a special window for it:

In the window procedure, they post WM_DDE_EXECUTE messages with commands:

The attackers used the following commands:

The main idea here is that if you create a LNK to an executable or command, then use the ShowGroup method, the program will be executed. This is an undocumented behavior in Microsoft Windows.

In our case, a malicious VBS was executed, which installs a next stage payload stored in CAB file:

Malicious VBS used in the attack

We have reported this “creative” abuse of DDE to Microsoft’s security team.

The final payload of the attack is a CAB file with the following MD5: 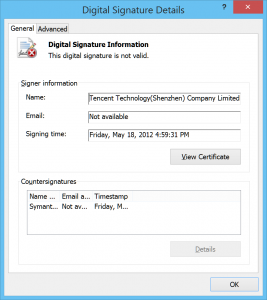 The malware deployed in this attack is extremely rare and apparently reserved only for high profile victims. Our products detect it as well as other malware from ScarCruft as HEUR:Trojan.Win32.ScarCruft.gen.

Although our visibility is rather limited, some of the victims of these attacks include:

Some of these were compromised over the last few days, indicating the attackers are still very active.

Nowadays, in-the-wild Flash Player exploits are becoming rare. This is because in most cases they need to be coupled with a Sandbox bypass exploit, which makes them rather tricky.

Additionally, Adobe has been doing a great job at implementing new mitigations to make exploitation of Flash Player more and more difficult.

Nevertheless, resourceful threat actors such as ScarCruft will probably continue to deploy zero-day exploits against their high profile targets.

As usual, the best defense against targeted attacks is a multi-layered approach. Windows users should combine traditional anti-malware technologies with patch management, host intrusion detection and, ideally, allowlisting and default-deny strategies. According to a study by the Australian DSD, 85% of the targeted attacks analysed could have been stopped by four simple defense strategies. While it’s impossible to achieve 100% protection, in practice and most cases all you have to do is increase your defenses to the point where it becomes too expensive for the attacker – who will just give up and move on to other targets.

* More information about the ScarCruft APT group is available to customers of Kaspersky Intelligent Services.